I’m not a coward. I’ve smooched aliens, vampires, and after an unfortunate playthrough of Hatoful Boyfriend, I have also smooched birds. It only makes sense that dating sim fans are always looking for the next new thing, the next face on which to plant your metaphorical lips. Sucker for Love: First Date definitely comes with some out of this world characters who are ripe for a kissy, even if actually getting one is going to possibly be more pain than it is worth.

Sucker for Love: First Date began as a single chapter game that came packaged with the 2020 Dread X Collection, a series of projects that included games made by dozens of indie horror developers during the lockdown. I actually played the original game on Halloween last year, so it was very exciting to hear that the project would be getting a full release. The original Sucker for Love was a 30-minute experience with only three endings able to be obtained, where First Date expands upon this by adding two new chapters with two new characters who you can give a big kiss on the mouth (or at least where you think the mouth is supposed to be).

Chapter one of the game is the same chapter I played back on Halloween last year beginning with the player character talking up his desire to finally meet with an Outer God, his small apartment filled with various occult paraphernalia and a pet turtle living in a terrarium above his PC. It’s clear that this is something he has been looking forward to for some time, and when he discovers a mysterious pink book out the front of his apartment, he is finally able to meet Ln’eta.

The first of the Lovecraftian horrors that you will be dating is Ln’eta, appropriately taking on the form of a genderswapped Cthulhu with thighs that just won’t quit. Her first chapter does an amazing job of setting up just how the game is played. The pink book that you found outside your front door is essentially an instruction manual on how to help Ln’eta end the world as we know it, she makes it very clear that the world will be ending with or without your cooperation, but at least this way you might get to give her a kiss before the devouring of the world as you know it.

Interactions with Ln’eta’s books happen through rituals, each one having instructions to follow, usually including holding the correct items and then reciting a chat in an unspeakable language. It’s also here where the game begins showing its teeth a little, every new ritual results in something else happening to you, each new change more horrific than the last. Even though Sucker for Love is a great parody of the dating sim genre with some hilarious moments, it doesn’t shy away from the horror with blood, gore, general ominous atmosphere and even one nasty jumpscare that got me every single time.

The king in yellow is a completely different beast to Ln’eta. Estir is a haughty actress who wants you to perform her play to the letter before wrapping you into her servitude. Where Ln’eta feels like a being of supreme power who will be ending the world because it is solely in her nature, Estir feels like she relishes in watching you suffer, in watching you squirm. Though fearsome, Estir’s desire to one up the other Outer Gods at every opportunity does give you a chance to trick her into promising you two smooches instead of just one.

Estir also has a book of her own, but hers is full of scripts and play directions that essentially need to be followed the same way as the rituals in Ln’eta’s route, but with an extra flair for the dramatic. There’s a lot of fun to be had in listening to the gusto she performs her lines with, but her route definitely tones the scares down quite a bit. A few moments gave me a little spook, but it doesn’t have the same dread that Ln’eta’s initial route did and the focus seems to be more on comedy.

The second chapter of the game actually contains both Estir’s route and a second route of Ln’eta. It has six endings all together that are achieved by either romancing one character at a time or by romancing both at once in different ways. The endings vary in levels of comedy, tragedy, and even at times dipping its toes into some genuinely emotional and touching outcomes. One of the endings actually managed to make me cry, likely in part due to the amazing character design and the voice work by the actresses in the game. 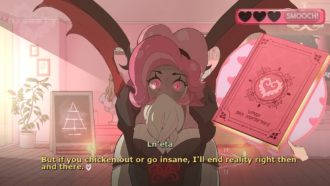 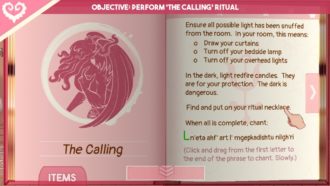 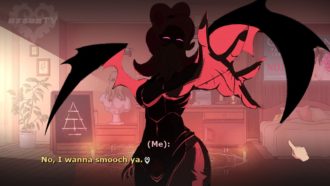 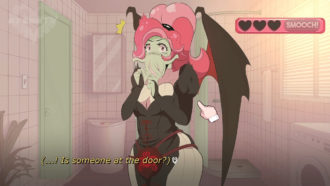 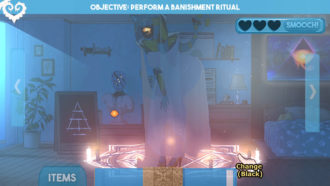 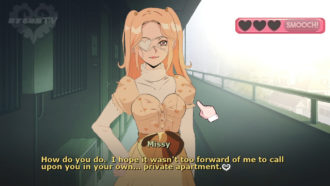 “The cutesy character designs are such an effective contrast to the gory rituals you are completing.”

Character design was clearly a big focus in the development of Sucker for Love: First Date and it was handled wonderfully. All of the characters have really appealing designs with cute emotive sprites that will keep you engaged as you play. The protagonist himself has a cute design too that you can see in the endings and anytime you check yourself out in the bathroom mirror. It also does a great job playing against the horror elements of the game, the cutesy character designs are such an effective contrast to the gory rituals you are completing.

Unfortunately, even though the game looks wonderful, it can sometimes not be so great mechanically. There were multiple times when some of the important items in the game weren’t appearing. When I attempted to start a ritual, I would get a popup saying that I didn’t have a particular item equipped and then I would check and see that it wasn’t in my inventory but also wasn’t in the room for me to pick up. After clicking on the spot where I knew the item should be, I was able to get the game working again. This happened multiple times. I was lucky that I already knew the layout of the room and where to click even when the item wasn’t visible, but if this happened to someone who had only been playing for a few minutes, it would completely stump them.

The game is also a little repetitive, while you are able to get a few alternate scenes and different endings, the core gameplay and the majority of the dialogue remain the same regardless of which ending you are going towards. The idea of performing rituals is really novel and interesting, but I think it does need to switch up a little to make the game more engaging. The final act does take it in a slightly different direction with a heavier focus on the horror and more time-based challenges. Even if they are still rituals, having to complete them faster does make for an interesting change. I won’t go too deep into the final act though, as I don’t want to spoil what happens in it, just know that it doesn’t hold back on the scares.

Sucker for Love: First Date is a really clever melding of both horror and romance that takes a totally different route from other popular genre mashes like Doki Doki Literature Club. A wonderful dash of comedy imbues the game with an extra layer of goodness. The game managed to make me scared and laugh at the same time, so it’s such a shame that glitches are still ever-present because they really drag the experience down. I hope that Sucker for Love: Second Date may come out someday, expanding on the very solid foundation to make something even better. Oh, and to give me more unknowable horrors to kiss, of course!