The Mass Effect series is an amazing sci-fi romp with diverse and interesting characters both human and non-human to interact with throughout your missions. It plays like a standard third-person shooter, though the earliest game in the franchise may lack a little nuance in that area. However, the main reason you play Mass Effect is going to be the worldbuilding, story and characters. The series prides itself on being incredibly interactive, with dialogue and story choices that often carry over through the entire series. A character you may have saved in the first game will come back and repay the favour long after you have forgotten that you even did it.

The story-arc for the three games as a whole is incredibly engaging, and watching Commander Shepard take on impossible mission after impossible mission is gratifying and stressful in a way that not many other games have managed to achieve. For a character designed for the player to project on, Shepard is wonderfully written and interesting, no matter what direction you take them in.

The cast of outstandingly written, acted and designed characters keeps growing with every new game, and each edition feels perfect, like they were always meant to be there. With very few exceptions, I would give my life for any member of Shepard’s crew in a heartbeat. Even the characters only introduced in the third game quickly become members of what really feels like a messy little family. Their interactions with Shepard and interactions with each other make them all feel so real and vibrant. You just can’t help but love all of them.

Mass Effect is a decently old series now with the first game releasing back in 2007. The newest game in the franchise, Mass Effect: Andromeda, did not release to the same level of fanfare as the games that were a part of the original trilogy. So when developer BioWare announced The Mass Effect Legendary Edition as a 4K remaster of the first 3 games including all DLC, fans were understandably excited.

Now that I have had some time with the new version of the games, I have broken down the important elements that have changed, and some things that I was disappointed to find stayed the same.

The biggest change in the Legendary Edition is actually the load times. Out of everything that they updated, this is the thing that really makes me want to recommend this version of Mass Effect to any console gamers out there, because the change is outstanding. In the PS3 version of Mass Effect 2, moving between the different floors in the Normandy could take up to five minutes, that’s if it even finished loading in the first place. So when I entered the elevator in the remaster, I was already reflexively reaching into my pocket for my phone to keep myself entertained while the game loaded, but it was already finished by the time I had it in my hand. This change does so much for the game, especially considering how much time you spend moving between floors to speak to all of your squad members, or to upgrade parts of the Normandy.

It also improves the loading times in the first Mass Effect, namely the elevator rides on the Citadel, well known for being lengthy. In the original, your party members would have conversations while the game was loading as a way to keep you busy, but half the time it would still load for another two minutes when they finished speaking. In the Legendary Edition, it’s done loading before the dialogue is even halfway finished, and you have the option to either let the conversation play out, or skip it and get right back to the game. A very good choice, because these little interactions are the most you get of dialogue between party members in the first game and cutting it entirely would be a great loss.

One of the things that was advertised most in the lead up to the release of the Legendary Edition was the upgraded textures and honestly, you probably won’t notice it too much if you have already played the games before. The only areas that I saw a real difference in were the hair textures and the grass on the few planets that actually have it. Some of the hair looks really good with the new textures, but I chose a curly option for my Shepard and the textures looked like they were mapped quite poorly, wrapping around the back of her head in a way that managed to make the messy curls look more like a flat helmet. Considering how much they mentioned these textures, it was upsetting to see that there was very little change. If no one had told me that the textures had been updated, I probably wouldn’t have even noticed.

The combat is also upgraded to some degree, but really only to the point that it is noticeable in the first game. The first game was so clunky to start with that even the slightest upgrade feels like a lot. Yet the difference in gameplay between the original Mass Effect and its sequels is still huge. Even with the improvements, the game still plays markedly worse than the later ones. It’s a disappointment, as I was hoping for a more substantial upgrade to the janky controls. While it does definitely improve upon the original, it still isn’t quite enough. 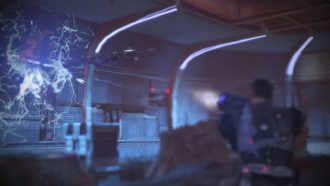 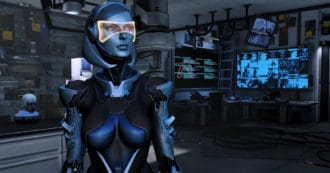 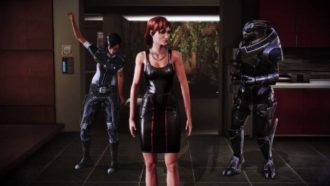 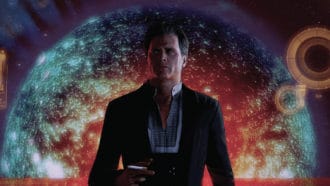 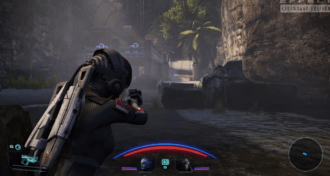 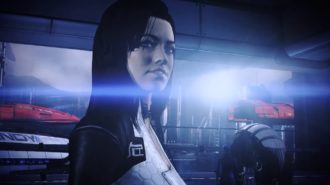 What stayed the same?

The animations are exactly the same, unfortunately. In the lead up to the release of the game, the one thing I was concerned about was the retention of Mass Effect’s awful animation rigging. The textures didn’t age particularly poorly, but the characters move so stiffly and with so little delicacy. Hands can’t close the whole way, and Shepard still downs a shot using the same animation that BioWare has been reusing for years now. I was really hoping for an update here, and this is honestly the biggest disappointment. Such wonderful characters with interesting and diverse character designs still moving like robots with stiff joints really is a waste, and it’s upsetting that they didn’t see this as a point that needed updating. These animations have been a running joke in the fandom for a very long time, and a lot of people were excited to see them change.

“The cast of outstandingly written, acted and designed characters keeps growing with every new game, and each edition feels perfect”

I played the whole way through the first game and encountered several bugs that aren’t patched out from the original. None of them were game-breaking, but it still seemed like something that should have been solved for this remaster. Namely, enemies often had faulty AI, standing completely still, hiding behind cover and never coming out. It fluctuated between making the gameplay far too easy or far too frustrating. Another large issue I encountered in my playthrough was a bug where my party members just stopped following me. Even when I gave them direct orders to move or attack, they would just stand completely still. If I brought an enemy close enough, they would shoot, but otherwise, they may as well have not been there. Obviously this makes that stage difficult, because the game is not designed for you to play with a party of one, and I was unable to return to my ship and fix the bug until completion of the mission.

Disappointingly, the exclusion of same-sex romances in the original Mass Effect is still present in the game. The lack of a female romance with the character Jack is still particularly egregious, considering her willingness to acknowledge that she is attracted to women as well as men. A lot of the characters that are now only available in straight relationships do have alternate dialogue in the game files, proving that they were originally going to be player sexual, but this was changed at some point in development. With the audio files already available, it’s upsetting that they didn’t take the time to patch them back in. It would have been a change that did a lot for representation.

Replaying Mass Effect was a refreshing reminder of how good BioWare can be. Even though there aren’t as many changes as I had hoped, it is still a great way to play through the original series. If you originally played on console, or have not played before, the Legendary Edition is a great way to go. It improves load times immensely, and I haven’t had any of the crashes I used to get with my PS3 copy of Mass Effect 2, so it is absolutely an improvement. Just don’t expect much of a change visually or gameplay-wise. If you play on PC, you can find plenty of mods to augment the experience in ways even better than this port does, so in that instance, I really wouldn’t recommend making the purchase.

If you haven’t played Mass Effect already and are looking for the best way to do so, the Legendary Edition will be the way to go. It has all of the games in one convenient package, along with all of the DLC. With the improvements to load times, it is absolutely the definitive way to play Mass Effect on console.

Even if you don’t plan on getting the Legendary Edition, maybe because you already own the original copies, I do highly recommend replaying Mass Effect. Going back to it after all these years proved that it still holds up as an amazing story-driven game that is absolutely worth your time, even if Shepard still doesn’t know how to close their hands.