Coming to us from a smaller team within Obsidian Entertainment, Grounded is a somewhat rare example of a survival game being developed by a non-indie studio. With 2 years of early access under its belt and a veteran developer at the helm, this game of shrunken humans and horrifying bugs has finally released in its 1.0 state.

The game showcases a not-so-serious spoof of late 80s / early 90s culture and media. With references to flamboyant cartoons and comics of the era, including an entertaining opening cinematic, players will be endeared by the nods to He-Man, Battletoads, and more that make up the set dressing for this uniquely captivating world. Perhaps the most obvious reference is to the wacky and baseless science-fiction of films like Flubber, or, more appropriately, Honey I Shrunk the Kids.

In Grounded, you play as one of four shrunken kids on a survival adventure through a bug-ridden backyard. In our preview of the game from July of 2020, we noted that whilst “the content on offer is good”, the narrative was unfortunately “over as soon as it begins”. The most notable thing about dipping back into the game after 2 years and into its final release, is just how much more realised the game world and its narrative now are.

Grounded isn’t just a game about shrunken kids, it’s a world full of consistent narrative threads that nourish the player as they progress through an increasingly hostile environment. Robot NPC BURG.L provides much of that storyline in addition to a good amount of charm as you discover details about a malevolent scientific body that’s augmenting human size to varying degrees of success. An epidemic of missing kids, a scientist building research facilities and leaving voice recordings for you to find, and the adverse effects of the shrinking and embiggening process are some of the earlier game story threads for you to ponder. Add to that the wonder of being the size of an ant in a massive backyard and the aforementioned early 90s nostalgia and you have a pretty good recipe for an addicting thematic universe.

“…a pretty good recipe for an addicting thematic universe.”

Perhaps the best part of Grounded’s world is how it unravels gradually alongside the gameplay. Survival games were never historically known for their rich narratives. And whilst Grounded may not stack up narratively against a more standard story-centric experience, I can safely say it’s amongst the better-implemented stories within survival games. Similar to games like Subnautica or The Forest, the narrative implementation is smartly interwoven within the gameplay experience. It’s not the main focus, but it exists enough to keep you interested and progressing at a steady pace. 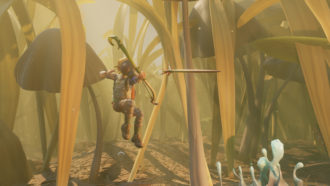 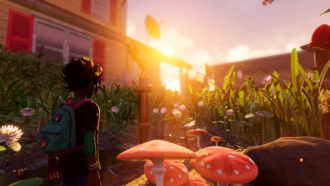 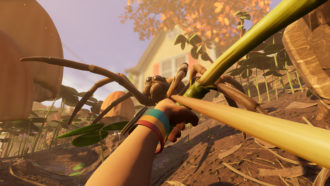 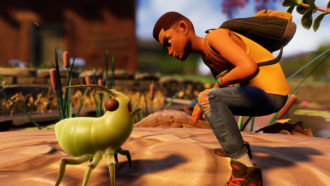 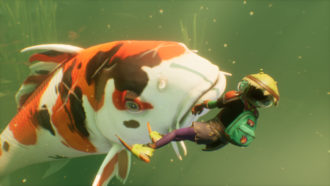 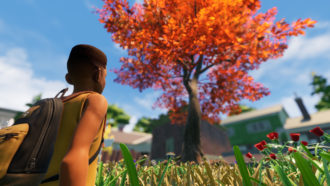 The gameplay of Grounded is fairly standard survival fare. Played from the first or third person, you move around an open world as you collect whatever useful detritus you can gather from the ground, build tools, weapons, and eventually armour, and start to find ways to live off the land around you. A fairly extensive base-building system allows you to make yourself a base of operations as you continue to upgrade, improve, explore, fight tougher and tougher enemies, and progress through the game’s narrative and objectives.

Entirely playable with up to 3 other people, Grounded also makes for a great cooperative experience. With so much on offer, splitting the party allows different players to focus on different objectives as they collectively advance and accumulate new resources, research, passive upgrades, and acquire collectibles. Be warned though, the game isn’t afraid to introduce incredibly tough (and scary) enemies in early game areas. Grounded has to be played with a very careful approach, something that helps highlight the hostility and futility of the situation you’re in.

The game really excels when it comes to exploration. The world is fascinating and exploring every nook and cranny is frequently rewarded. “Raw Science” is scattered around the yard. This resource is one of the backbones of your advancement as you unlock new technology to give you advantages and improvements to yourself, your constructions, and more. “Milk Molars” are another resource that grant passive improvements that can be found simply by searching. Shards are another resource, this time allowing you to improve your weapons and armour. Yet, even without these crucial exploration rewards, the game would still be fun to just wander around in, because the sites of the game world are just super fun to uncover. Grounded really is quite pretty to look at, though it is worth noting that your cone of vision is somewhat limited, with a blur effect put on background details that may or may not be pleasing to your eye. 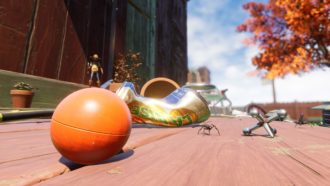 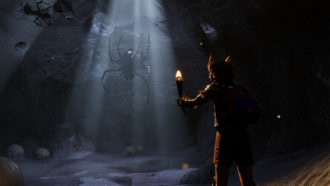 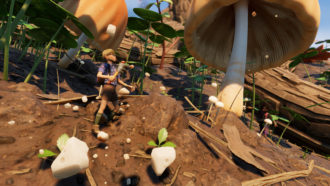 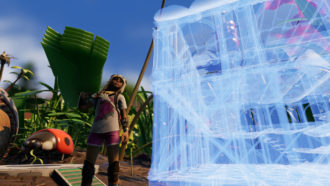 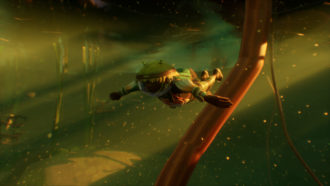 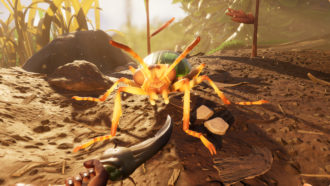 At times the progression of the game is gated behind somewhat tedious resource acquisition. If you stumble into the ‘Haze’ area, for instance, you’ll quickly notice how ill-equipped you are to deal with the threats at hand. It’s not really knowledge or experience that allows you to deal with those threats, more just upgraded weapons, new passives, and mutations that are acquired through play. It’s at these moments when the general amazement of exploration is hindered, as you now need to bunker down and grind for resources and upgrades that would allow for progression into those hostile zones. It’s a fairly minor criticism all things considered, because even though it can feel a little grindy, it’s not bad to have an excuse to spend more time within the Grounded experience rather than rushing through the narrative progression.

The game will take you to different parts of the yard. You’ll find yourself climbing through a hedge, diving to the depths of a pond, exploring ant dens and other underground passages, and eventually making your way up to the upper parts of the yard. It’s all quite varied and enjoyable, with massive footprints and gigantic toys serving as landmarks for your shrunken escapades. The foes found around include different species of insect and arachnid, with great unscripted horror moments sure to be found for every new player. It can’t be overstated how scary it is the first time you come across a spider. And even 20+ hours into the game, I still find myself having those jump scare moments. Thankfully, for those who are arachnophobic, an accessibility setting exists to allow you to drastically change the appearance of spiders.

“…with great unscripted horror moments sure to be found for every new player.”

If one thing disappointed me the most about Grounded, it would be the fact that in some ways, the game still feels a little unfinished. It’s not that the narrative is incomplete or that key features are missing, it’s more that a slight lack of polish still lingers from its early access days. It’s certainly not rare to see visual glitches, like equipment temporarily disappearing from your inventory, or bugs getting caught in terrain. I also noticed some small quality-of-life things were yet to be implemented, like the inability to carry planks and stems up ladders. The upper yard also features some new bugs that are clearly just reskins of old bugs with slightly different names. None of this ruins the experience, but the game still has room for improvement which makes me wonder what it would look like if it had another 6 months of development.

Still, despite any criticism, it’s obvious Grounded is made with care and veterancy. Being able to move your constructions easily, stack to nearby chests, loot arrows by simply walking over them, and many more simple interactions prove how Grounded goes above and beyond other survival games to make the player’s experience smooth and enjoyable. It’s a big world with a surprising depth of content that’s sure to keep any player engaged from its opening moments to its terrifying last mission.

Featuring a fun and slightly silly setting for this genre, Grounded comfortably provides the basics that allow it to create an engrossing and at times horrifying survival experience. Add a good amount of worldbuilding and a narrative that compliments the gameplay nicely and you have a cooperative experience well worth your time, even if a few bugs (and not the good kind!) have stuck around throughout its pre-release period.