One of my very first memories of computer gaming is of the Monkey Island series. It was my introduction to the series (I wasn’t yet born when MI1 or MI2 were released), and though I was too young to complete it without help from my parents, I nonetheless fell in love with it. I owe some of my fondest memories to Monkey Island, and even some of my oldest friends. But no matter how excited I am to finally play the next game in the series, I imagine its co-creator Ron Gilbert is even more excited to finally have Return to Monkey Island released.

The marketing and discussions surrounding Return to Monkey Island often say that the game starts immediately after the events of LeChuck’s Revenge. This is pretty misleading. The events of Return of Monkey Island are the latest chronologically, as evidenced by the fact that Elaine and Guybrush are already married and Mêlée Island has a new governor, all events that occurred in the third game or later.

Guybrush starts his journey on Mêlée Island, determined to find the Secret of Monkey Island™. He brings his mission before the three new pirate leaders, who laugh him off. If this is sounding familiar, it’s supposed to – this is just as much a nostalgia trip for Guybrush as it is for us. This story is about Guybrush’s lingering obsessions with the secret, which is necessarily tied with his memories of Mêlée and LeChuck.

It isn’t all nostalgic wank, though. Guybrush’s adventure has him visit brand new islands as well as old ones, meeting (and annoying) new characters as well as old. Fans will love to see the return of many characters, such as Stan the incorrigible salesman, Murray the demonic talking skull, and of course the mysterious voodoo woman.

Guybrush in the modern day

Terrible Toybox’s first title, Thimbleweed Park, had players choose their actions from a list of verbs like use, give, push, and pull. This is how the original Monkey Island did things, which took its roots from the days of literally having to write your commands via text in a command window. It’s an outdated gameplay method these days, though judging by Thimbleweed Park’s success, one that gamers feel nostalgic for.

In Return, the mouse actions have been completely streamlined to suit modern point-and-click adventures. No more selecting verbs from a list, or even choosing hand, eye, or mouth action like how Curse of Monkey Island did it. Now you simply left-click to examine an object or right-click to interact with it.  It also adds a layer of storytelling to the gameplay, as a brief description of your action or thought provides insight into Guybrush’s thoughts, often to comedic effect.

Return is truly in its element both comedically and by way of its puzzles, which are the perfect difficulty on the game’s Hard Mode (there is a casual mode that skips some of the harder puzzles, but my recommendation is for Hard Mode). The puzzles all make sense contextually and are far less obtuse than they were in the first few games, which could be downright diabolical. The puzzles in Return are easier to follow, while still retaining a fair difficulty level. The fact remains, however, that it is a far easier game to clear.

“Return is truly in its element both comedically and by way of its puzzles.”

While there were just one or two puzzles that were personal misses for me, crucially, there were no puzzles that made me go, “How the hell was I supposed to figure that out?!”, which is always a win in my book. At the same time, some of Monkey Island’s most memorable puzzles are ones that are outside the realm of logical thinking, and there wasn’t really anything in Return that stood out in the same way. The cost of having puzzles that make sense, I suppose, but I can’t help but think there was a happy middle ground they could have hit, especially since they have included such a handy hint system.

Early on, Guybrush is given a book of hints, which uses a simple but elegant system. If you need help, it first gently encourages you to think in the right direction, but becomes increasingly more direct in its hints if you are still having trouble, and will eventually just give you the solution. Some puzzle gamers like to poo-poo hint guides and walkthroughs, but the truth is they are just a nice courtesy to include in your puzzle game. 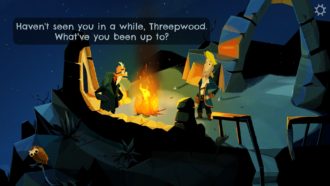 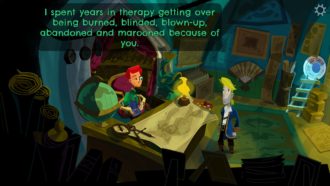 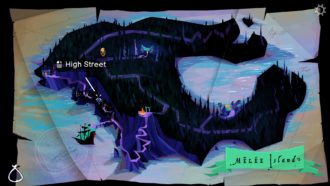 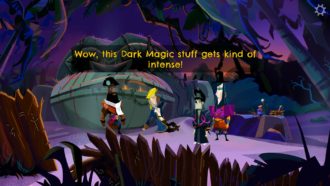 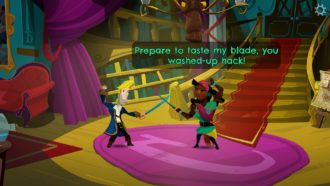 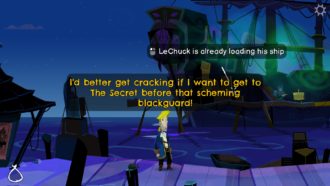 The art direction is completely new for the Monkey Island series. The first two titles in the series shared a ‘realistic’ art style that was in line with other point-and-click adventures at the time like Kings Quest. The subsequent games adopted a slightly more stylised design, but didn’t stray too far from the original look. Return to Monkey Island is a complete departure from this, and it made for an unpopular first impression; a lot of fans didn’t like the new direction. While I was not one of the few fans who (for some damn reason) chose to voice their disappointment by harassing the developers on social media, I must admit I felt the disappointment too. The blocky and textured designs were just not what I had come to expect from the series, and they didn’t provide any sense of nostalgia that the original designs might have.

While ultimately I still would have preferred something more similar to the original look, I must admit that the game used its new art style to the fullest. It is so full of character now, from Guybrush’s scruffy clothes and stubble to LeChuck’s… everything. Backgrounds are just as detailed as ever, but now they suit the strange and theatrical setting of Monkey Island so much more. It especially livens up scenes featuring LeChuck’s undead crew, who are given more of a spotlight than they ever have before.

My only point of contention with this mighty return for a mighty pirate is its ending, which was a slight disappointment. While I will obviously not spoil anything, if you would like to go into the game completely blind, I would recommend skipping this next section, as a seasoned Monkey Island fan may be able to read between some lines here.

A story held back by the past

The following game, Curse of Monkey Island, came up with its own vague explanation for the strange climax. But since neither Gilbert nor any of the other original co-creators were involved in the game, what Curse came up with inevitably left something to be desired. Fans still weren’t quite sure what to make of the strange situation, and so the ending of MI2 remains an oddity that is the topic of much fandom discussion to this day.

I explain all of this because Return to Monkey Island opens — and closes — with a new interpretation of LeChuck’s Revenge‘s ending. Not only that, but it also serves to reframe the telling of the other games as well.

“Return to Monkey Island opens with a new interpretation of LeChuck’s Revenge‘s ending.”

Suffice it to say, the game doesn’t hand us a traditional ending, just like Monkey Island 2: LeChuck’s Revenge didn’t. This in and of itself isn’t always a bad thing, but it’s just not to the game’s benefit. All it succeeded in doing is deflate a mystery 30 years in the making: does Guybrush ever find the Secret of Monkey Island?

They almost landed it; but for what they were going for, there needed to be more set up for the payoff.

Sadly, I can’t get into more specifics without going into major spoiler territory, and it’s the kind of ending that might resonate with each person differently. At the very least, it’s a definitive explanation as to what the heck happened at the end of LeChuck’s Revenge. I look forward to seeing the no-doubt numerous fan discussions that will spawn in light of this new ending.

Return to Monkey Island brings the beloved classic point-and-click series into the modern puzzle adventure genre, and it’s a perfect fit. It’s a fine addition to the Monkey Island series, but it nevertheless seems held back by Monkey Island 2’s strange ending. In its attempt to explain it away, it just hurts its own narrative, which had the potential for more than it achieved. But it is still a fun ride, full of wild, funny, and surprisingly sincere moments. I will be keenly looking forward to the next Monkey Island game from the mind of Gilbert and his team.