The Blue Burrower returns in Shovel Knight Dig, bringing the franchise’s particular brand of pixelated platforming in a roguelike direction as you venture down in the mines to recover your treasure from the nefarious Hexcavators. Shovel Knight Dig is a short but highly enjoyable time, and is the most fun I have had with a roguelike game in a while.

Set before the events of the main Shovel Knight campaign, Shovel Knight Dig sees Shovel Knight and his partner Shield Knight attacked and robbed by the Hexcavators, a six-knight crew of master thieves led by Drill Knight. After their attack on the heroic duo, the bandits dig a giant hole and flee underground with their loot. Determined to recover his goods, Shovel Knight sets up camp at the edge of the burrow and ventures underground to stop Drill Knight.

Shovel Knight has never been super big on the exposition or deep lore, and Shovel Knight Dig is no exception. The stakes are far lower than the other Shovel Knight campaigns, and the repeated jaunts through the hub area and familiar zones are not used to flesh out the plot very much, unlike Hades.

The game’s presentation is an upgrade of what has come before, moving from 8-bit to 16-bit graphics and upping the colour palette. Characters are incredibly vibrant and full of energy and life, every movement punctuated by an over-the-top animation or flourish making them memorable and pop onscreen. Little features like Chester’s little bow when you buy something, or the different idle animations of the NPCs that mill around the hub area, do wonders at making the setting feel charming and lively. Returning composer Jake Kaufman also doesn’t disappoint, bringing a new suite of playful retro tracks which made each run a delight to listen to. 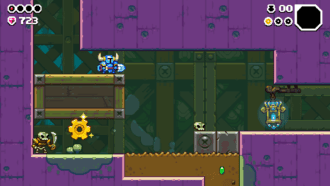 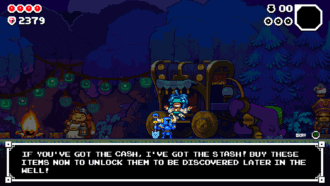 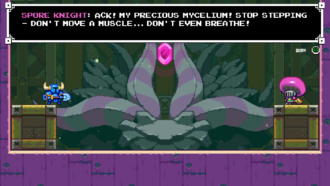 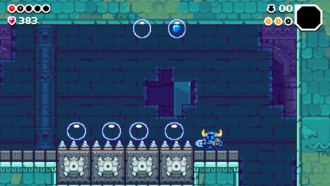 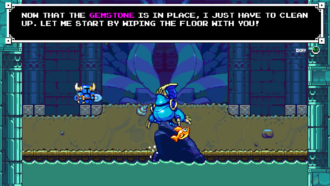 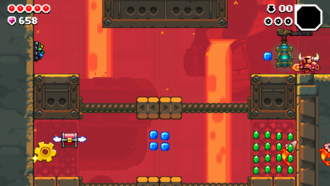 In terms of how Shovel Knight Dig plays, it will feel familiar to fans of the main Shovel Knight campaign, with some differences. Shovel Knight’s overall move set is basically the same, albeit with the ability to dig directly below himself without needing to jump first. Not unlike Downwell, you must constantly travel downwards, with occasional stops into tunnels on the right and left where secrets and shopkeepers can be found. The pressure is on to keep moving, as hanging around in a zone for too long will spawn a giant drill from the top of the screen that kills you in one hit if you don’t get away fast enough.

The focus on downward movement is a bit unusual for a platformer, and encouraged careful thought about tackling the game’s obstacles. Shovel Knight can dig through dirt to his left, right, or below him, but he cannot dig upwards without a special upgrade. As such, you must dig through dirt in the right order to create steps or platforms in order to collect treasure or access doors that are above you. Of course, if you miss anything, it isn’t a big deal; Shovel Knight Dig is a roguelike, so you can just grab it on your next run.

In each zone, the player can grab cogs (collecting three of which provide a reward at the end of each sub-zone), treasure, and relics, which can either be passive buffs or active sub-weapons. Many of the items, such as certain kinds of keys and eggs (which hatch into flying allies who deal extra damage for you), can be destroyed if you are damaged. As such, players are incentivised to play carefully and avoid enemy attacks as much as possible to maximise the utility of the game’s pickups.

“As far as roguelikes go, I found Shovel Knight Dig remarkably charitable with how it doles out permanent progress.”

As far as roguelikes go, I found Shovel Knight Dig remarkably charitable with how it doles out permanent progress. The game showers you with treasure at the end of each run, and persistent unlocks and shortcuts to later zones never felt prohibitively expensive. You only lose a portion of your treasure when you are defeated, and that can be recovered from floating bags of loot in your next run.

The runs themselves are also fairly short, clocking in at about 5-10 minutes per zone, with the overall game containing four zones. The consequence of such generosity is that Shovel Knight Dig may come across as a bit easy and insubstantial compared to other roguelikes. The end credits are reachable in only a few hours, and the few post-game activities present include grinding for the high-value items sold by the vendors in the hub area or attempting the challenging tasks required to unlock the True Ending, which could certainly have stood to have been better explained in-game.

The spectre of a malevolent RNG didn’t curse Shovel Knight Dig the way it does many roguelikes. Admittedly, some runs can sometimes have weird treasure placement or next-to-impossible-to-access shopkeepers. However, the brevity of the runs and good balance to the in-game bonuses (which felt consistently useful, but not so overpowered that I felt useless without them) ensured that I always felt that Shovel Knight Dig was being fair with me

Shovel Knight Dig is definitely worth playing for both platformer and roguelike fans. The twist on the Shovel Knight formula makes Shovel Knight Dig feel fresh, despite the mostly unchanged controls from the original. The fair random elements and generous meta-progression make it a good entry point for platformer fans unfamiliar with roguelikes, whereas hardcore roguelike fans can enjoy the tough bosses and challenges required to get the True Ending. Although the main campaign may seem rather brief, it’s a blast while it lasts, and an easy recommendation.