When the Splatoon series was first announced, it was a baffling reveal. A third person shooter by Nintendo seemed utterly unbelievable at the time, and one with such a strong paint-soaked aesthetic was surprising. I’m sure a lot of folks expected it to be a one-off, a game that didn’t perform as well as Nintendo’s long running titles like Mario or Zelda, but Splatoon was a huge success and proved it was here to stay.

Many people, myself included, were absolutely hooked into the fun, colourful gameplay loop of Splatoon, excitedly moving onto the brilliant sequel on the Switch and waiting with bated breath for the next entry. It’s a series that feels so deeply ingrained in its splat-tastic aesthetic, that getting another chance to visit that world and dress your character in more fresh styles is irresistible. Splatoon 3 is a well-rounded package that captures the fun of its predecessors, makes smart tweaks to its systems and maintains its competitive-yet-friendly nature throughout, making it the most refined entry in the series yet.

While the Splatoon series is, at its heart, a multiplayer experience, each game has come packaged with a single player campaign to help new players get familiar with the gameplay. Generally, the single player is a lukewarm affair with mostly platforming and occasionally shooter sections that do little to keep you enticed. The plot also usually leaves a lot to be desired. Splatoon 3 however does an amazing job of improving the moment to moment gameplay in the single player campaign by switching to a mission based system where each mission could be completely different from the last.

Some do follow the similar platforming formula, where others are about reaching the end with only one tank of ink, or not using ink at all. They feel more like a series of challenges, and it is great fun. I especially loved the creative ones that had little to nothing to do with Splatoon’s regular gameplay loop, as it was a fun break from tradition.

As with the previous games, there isn’t too much to the plot, most of the meat can be found in optional readables than in the actual game, but Splatoon has always been more interesting with its history and world building than the events you are actually playing through. Also everything is in service of this absolute spectacle of a final boss, so it’s difficult to be upset, even if the road you take to get there isn’t very engaging.

This is where the majority of the gameplay lies in the Splatoon series, and this is no exception in the third game. Turf War is the gameplay mode that most will recognize, it’s the casual mode that you are locked into until reaching level 10 when you gain access to ranked. The main goal in Turf War is simple: cover the ground in the most ink. There is obviously a benefit to taking out other players, because the longer they spend in the respawn the less ink they’re flinging, but kill count isn’t the most important goal, which means the game remains accessible even to those who aren’t focused on directly attacking the opposition.

“…even those who are nervous about tackling the anarchy battles can still experience these fun modes.”

Anarchy battle is quite different with rotating modes that each come with their own challenges. Splat Zones, Tower Control, Rainmaker, and Clam Blitz are the modes in the list, and they do a fantastic job of keeping the gameplay interesting. Though in previous Splatoon titles, playing ranked was a nerve wracking experience because every loss demonstrably affected your rank, Splatoon 3 adds Open Battles which can be played with friends and while your rank still fluctuates, it is much more forgiving. This means that even those who are nervous about tackling the anarchy battles can still experience these fun modes. 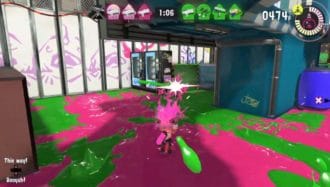 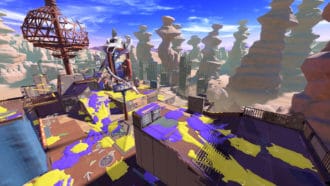 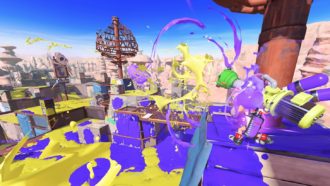 Salmon Run is Splatoon’s offering for those interested in PvE experiences. Originally only available during set times, Salmon Run is now able to be played 24/7. This is a wave based mode, where you and three other players work together to fight back hundreds of salmonids while collecting golden eggs for your mysterious benefactor Mr Grizz. It’s a lot of fun, while it can be stress inducing when you are getting swarmed and only one player is left alive, Salmon Run is definitely my favorite game mode. Splatoon 3 has added a collection of new boss salmonids to fight, and even cooler, King Salmonids. These guys are towering beasts that crush you beneath them as they move across the stage, difficult to beat, but worth a lot of cash if you manage to do it.

One of the key aspects of the Splatoon series has always been fashion, and this is even more prominent in the newest entry. As always, you can customise your player character (now with the option to choose between an inkling and an octoling) with hairstyles, eye color and now also eyebrows and legwear. Once you get into the game, playing any of the multiplayer games will give you funds to go out and purchase your own fresh looks. Clothes do provide gameplay benefits, but also your character can be seen by others lurking about in the plaza, so why not show off your coolest outfits?

Splatoon 3 also adds a personal locker that you can customise, and you can view the lockers of other players online that day as well. It’s another great way that Splatoon promotes individuality and freedom of expression.

There have been a lot of improvements to the online matchmaking in Splatoon 3, as it is the first one in the series that allows you to create teams with your friends and know that you will all be fighting on the same team. In previous titles, this was impossible, and even when in the lobby with friends, there was no way to know if you would be fighting together, or against each other.

Despite this important and well needed change, throughout my time with Splatoon 3 I had an alarming number of disconnects. Probably 1 out of 3 games I queued for, I would lose connection before even entering the match, I also had multiple occasions of being disconnected while playing, both in turf war and in salmon run. I played on wired and wireless connections at different times and had issues on both. I hope that these issues are ironed out in future updates, because it is incredibly frustrating, especially in a game that has most of its key gameplay features only available online, but at this point, it’s highly disappointing.

If you haven’t picked up a Splatoon game before, then Splatoon 3 is a great place to start. It takes a lot of steps to make it easier to play with friends and has a variety of different modes to play, meaning everyone will have something they enjoy, even if they just want to play single player. The game is more customisable than ever and you are free to change the appearance of your character at any time if you find yourself wanting a new look. The only real problem with the game as it stands is the connection issues. When it works, the game is amazingly fun and you will find yourself playing match after match, only for the connection to drop again out of nowhere. Hopefully this gets fixed soon so I can be playing Splatoon 3 for even longer during my next session.