Steelrising comes from the talented development team at Spiders, who have been honing their craft in making video games over the last several years. I’ve long championed the studio for making steady improvements, with The Technomancer an underrated action RPG gem of theirs in 2016, and Greedfall in 2019 taking the concept further with a deeper story that is reminiscent of Bioware’s efforts. Greedfall has earned itself an upcoming sequel, but in the meantime Spiders have dabbled in another genre under the RPG umbrella – the oft discussed soulslike. This tough-as-nails style of action RPG has had many attempts from teams keen to capture the magic of From Software’s growing list of successes, but Steelrising is one of the more interesting and above all accessible examples we’ve had in recent memory.

Set in an alternate history Paris 1789, the French Revolution has stalled, and the people’s revolt has been heavily suppressed by an army of automatons, deployed by the King’s orders. Paris is burning – quite literally – and these nasty robots roam the streets looking for bloodshed. You play as Aegis, an automaton masterpiece created by the engineer Vaucanson to be bodyguard to the Queen, as you set out to save the French Revolution. It’s certainly a unique take, and the backdrop of Paris with a story full of conflict within makes for an inspired setting, moving away from the gothic swamp-like expectations full of the same dragons we’ve slain time and time again. Battling robots as a super-slick badass machine, dealing with historical figures like Marie-Antoinette, Lafayette and Robespierre? So far, so good.

At first glance, Steelrising does a lot of familiar things that will be instantly recognisable to soulslike fans. Instead of an Estus Flask to heal yourself, you’ll have Oil Burrette. Instead of campfires, it’s Vestals that you will rest at, refreshing your health and oil supply but also allowing you to upgrade your attributes and upgrade your equipment using Anima Essence. If you die through the challenging combat, you’ll have to go back and collect the Anima Essence where you fell, but if you die before you can retrieve it, it’s gone. In the opening hours, it almost seems like Steelrising is a lower budget version of a soulslike with a different environmental setting, but it veers off into its own territory soon after.

“The architecture is stunning, with castles and monuments lovingly crafted.”

The first point of difference between Steelrising and other soulslikes is that the storyline here is more linear in nature, with cutscenes moving things along and conversations between Aegis and key characters taking place. There is the occasional voice that comes from inside a boarded-up home that is reminiscent of Dark Souls more vague style of storytelling, but beyond that there is a main storyline with side quests, all listed in a handy journal. In addition, early on you get access to a compass, that places waypoints on the map in front of you so you know where to go to trigger the next part of the mission. There’s clear signposting of where side missions are, and you can fast travel to different locations on a map to get to them quickly. While previous games in the genre have left me frustrated and directionless, Steelrising is keen for you to hit the next checkpoint, which keeps things moving at a far brisker pace.

It’s also refreshing to learn fragmented pieces of narrative via cutscenes and flashbacks, often detailing when the automatons first attacked and the chaos they caused. I know this isn’t new to game design, but it feels fresh when paired with the style of combat and gameplay that has been so strict in its delivery with most of its iterations. Narratively, Aegis doesn’t have a lot to say with her rigid responses at first (she is a robot, after all), but her character does evolve throughout the story to the point where I found her quite likable. Her objective is clear and concise initially, but her own humanity – or lack thereof – is constantly brought into question, and I found myself rooting for her.

Environments themselves can be quite pretty at times too, with buildings that contain lavish interiors and gardens full of winding paths and statues. Steelrising also maintains its own brand of violent darkness. The robots themselves are consistently creepy, and the boss designs particularly stand out, with automatons pieced together by angel heads, bibles and other Catholic paraphernalia in a grotesque kind of way. Streets are littered with piles of bodies from a clear robot war, blood stains on the ground, buildings on fire while screams and the clanging of automatons marching echoing in the distance. The architecture is also stunning, with castles and monuments lovingly crafted. I adore the setting, and they’ve done an excellent job of fully realising it here, with both the beauty and the madness. 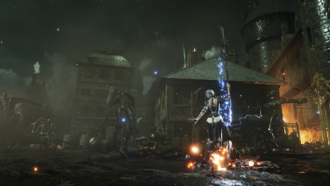 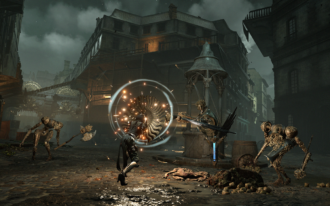 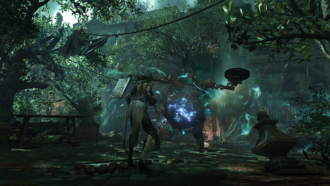 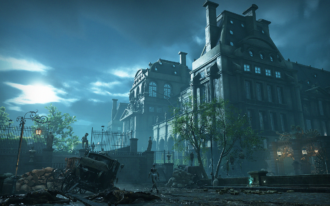 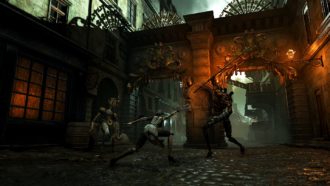 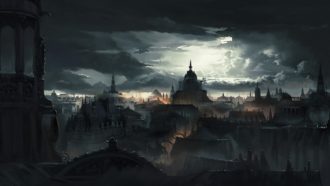 When it comes to combat, Steelrising is certainly challenging, but perhaps not as intense as what the genre is known for. The various types of automatons that you’ll come up against are fairly readable with their attack patterns, to the point where once you’ve downed a couple of them, you’re usually able to take them on with less fear of defeat. That’s not to say the game is easy; when it’s at its most hectic, it is sending multiple different enemy types your way at once; some swing around giant chains with cannon-balls on the end which must be avoided, others shoot from a distance, some blow a trumpet of ice in your face as they dance around while others spin at you while flying, shooting fire. One on one, these jittering, malfunctioning machines are easy to deal with, but in groups they can be a total nightmare. You can also stealthily attack enemies to get a stronger hit on them from behind.

Your main weapons are easily interchangeable, with a lot of variety. A classic Halberd is slow and a bit unwieldy at first, but packs a punch, while fans or dual swords allow you to slice and dice faster, allowing you to easily weave in and out of an attack. Each weapon also comes armed with a special move, either offensive or defensive. This is where you can parry or block (otherwise you just have a dodge button), or use ranged attacks like gunfire, or even infusing elemental attacks. You can have two weapons equipped at once, and I enjoyed experimenting with different combinations; eventually I settled on dual swords to attack quickly, but kept my gun on hand to do long range damage to slower enemies when in a pinch.

An extra factor is overheating and rapid cooling; actions consume your endurance, and when Aegis overheats, you’re unable to perform even the most basic of actions, like attacking, jumping or dodging. You can trigger rapid cooling when you’re overheated which can instantly restore some of this, but that will inflict frost damage to you as a trade-off. You also can’t use rapid cooling straight away. This means you can’t just mash attack buttons in combat until you run out of stamina and then simply run away; you’re a sitting duck, so managing it is crucial. It’s not a bad idea necessarily but I do think it is a negative without a positive; it means you have to watch the gauge to ensure you don’t go too far, and you are punished if you don’t. 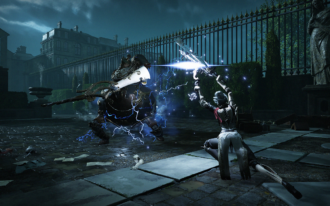 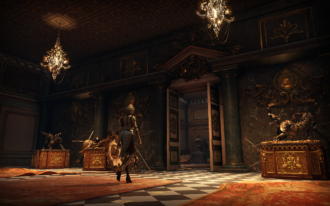 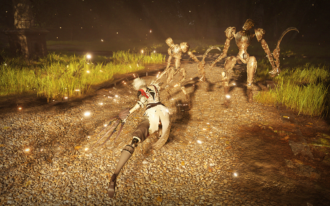 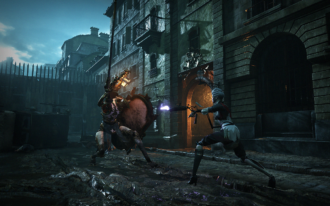 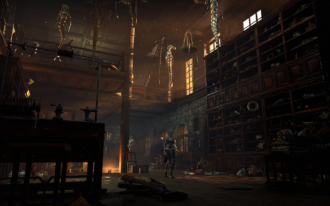 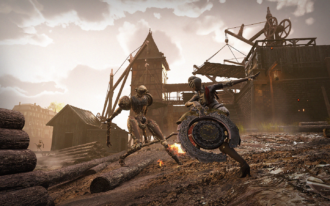 With so much at your disposal, it’s disappointing that many battles come off feeling the same; usually attacking, then dodging, waiting for the enemy automaton to miss and then lunging in with more attacks before rinsing and repeating is the way to go. Boss fights are also a bit of a letdown. My expectations were perhaps a little high when thinking about genre greats, gigantic awful threats that take your breath away and feel like you’re up against insurmountable odds. Here, they’re just slightly bigger and spongier versions of the enemies you’ve already faced, for the most part – and if you preserve your ammo, you can take them down from a distance without much trouble at all.

Switching things up, you’ll unlock extra means of traversal as you move along; while Steelrising does an admirable job of looping back on itself with shortcuts, some won’t be accessible right away until you unlock a dash (that can be done in the air to increase your jump), a grappling hook to access high-up areas and a ram to destroy fragile walls. While an area feels quite linear the first time you explore it, unlocking that equipment provides more opportunities to find secrets or access side quests as they come up. The dash itself also provides opportunity for some mild platform puzzles as you try to figure out how to reach an area that was previously unavailable. Just the fact that you can jump freely makes Aegis feel much more agile than her feet-stuck-to-the-ground protagonist counterparts.

“…the barrier to entry has been removed, and it makes for a much more palatable experience overall.”

Putting an end to the difficulty debate, Steelrising has an Assist Mode that can be turned on at any time. Smartly, the team at Spiders haven’t pre-defined an “easy mode” and instead have a range of settings that can be modified to adjust your experience. There are sliders so that you can reduce the amount of damage you take from enemies, and decide how quickly you regenerate stamina. You can also remove the annoyance of “losing your XP when you die” trope completely, taking out that huge risk factor as you progress. Activating easy cooling also means you won’t stay overheated for long (which counters my annoyance for that mechanic in the first place).

While many will try to leave Assist Mode off to get “the true experience”, I really do applaud Spiders for implementing it. They wanted to make an action RPG with soulslike elements, but they understand that the genre itself can be frustrating and many people don’t bother playing games that are too difficult. Here, that barrier to entry has been removed, and it makes for a much more palatable experience overall, and allows you to play the game however you want. I genuinely wish other games of this style would take note so that I actually have a chance to finish them.

On the surface, Steelrising looks like “just another soulslike with a twist”, but the more I played, the more I felt enamoured by its gorgeous aesthetic, its likable robot protagonist and its variety of horrifying, angry automaton enemies. By incorporating cutscenes, a linear narrative and traditional RPG quest structure, it keeps the action and progression feeling very focused throughout, with no real roadblocks aside from the difficulty itself. Then, if that’s bothering you too, you can turn on Assist Mode and still enjoy the experience your own way. Despite some simplistic combat and unmemorable boss fights, Steelrising is a satisfying robot action romp that earns bonus points for being one of the most accessible soulslike titles on the market, meaning more gamers will be able to enjoy its haunting vision of alternate history Paris overrun by dastardly machines. Bon travail!