Cowabunga it is. Hot off the heels of Shredder’s Revenge, Teenage Mutant Ninja Turtles: The Cowabunga Collection has leapt from the shadows to give us turtle fans a chance to relive some of our greatest childhood classics, all with some spicy new upgrades that would make pepperoni jealous. Shall we dig in while it’s still piping hot?

Teenage Mutant Ninja Turtles: The Cowabunga Collection brings together 13 games ranging from the original Nintendo to coin-gulping arcade cabinets, alongside some radical bonus content and modern improvements. If that doesn’t get the mouth watering, then have a look at this trailer before we crack open the box!

Whether you’re a TMNT fan or even just grew up in the era they were at their peak, you will have undoubtedly come across the absolute glut of merch they had at the time, and yes, they had a ton of video games. Whether you had a MegaDrive, a GameBoy, a NES, or a SNES, you had a chance to own one of the titles here, or perhaps rent one from your local Blockbuster (now there’s some history for you). The Collection has the following titles, and I’ll be giving you an overview of them all as we go, just in case you missed them the first time around.

We have on the menu:

It’s a really robust selection, offering beat-em-ups, fighters, platformers, and even a metroidvania for good measure! At this point all it needs is a sports title, but hey, don’t get Raphael started on cricket right?

The Collection, aka Big Choices, 4PM

The Collection itself is oozing with charm from the minute you start it up, hitting you with the classic 80s theme, and having menus that have some lovely new illustrations. On top of that, as you cycle through what game to pick, you can actually see classic comic panels around each game straight from the days of the OG Mirage comics. Very stylish if I do say so myself.

As for the showcasing of the games themselves, each appeared to run really smoothly from testing, with nary a missed input or delayed button in sight. Every title from Arcade to GameBoy ran like butter, with the exception of the NES titles due to their old limitations. This is of course where the Enhancement menus come in.

Each title has Enhancements, toggleable features and fixes that let you augment the games in different ways. For the NES titles they allow you to remove sprite limits and slowdown, even allowing Hothead V Hothead matches in the NES Tournament Fighters. For others they go even further, allowing you to essentially enable cheats from the old days like playing as boss characters in some titles or activating harder difficulties and even a god mode. They can be a lot of fun to mess around with, so be sure to give them a look.

Beyond that, you’ve got some other nice bells and whistles such as game borders, different screen sizes, and the ability to save and load states, which is super handy for games that either used passwords or had no save system at all. Each title also has rewind, so if you mess up and want to Thanos it away, just hold the button for a while and off it goes while you try again. Imagine the coins we could have saved back in the day…

Lastly, a bunch of the games have online multiplayer on top of the existing local, so the pizza party can go global. I wasn’t able to test this out due to playing pre-release, but if it handles well then that’s just the cherry on the lava cake side dude.

Speaking of sides, this collection has enough to have you bursting out of your shell. Original manuals and strategy guides, stills from different shows, music players, the list goes on. There is seriously a huge amount to sink your teeth into here; just don’t neglect your training while doing it!

The Games, aka Genre Surfin’

As I said earlier, we have a lot of games here, and they actually cover a decent amount of gameplay types. Let’s break it all down a bit so you know what ingredients are in each slice; not all of us are gonna just chow it all down like Mikey.

These are probably the best known, and for good reason. Join a friend, up to three if it’s Arcade, and move through different environments beating up foot soldiers and Shredder’s goons, all while respecting proper pizza etiquette and thanking the great ninja in the sky there’s now a button to add lives.

These are a blast to play through, and an easy recommendation if you’re just starting out. And yes, Turtles in Time on the SNES is still the GOAT.

These are all single-player affairs where you’ll need to get from A to B whilst fending off enemies and exploring the environment for power-ups. TMNT for the NES has an earned reputation for being quite difficult, so make use of the rewind and saves if you need to. Radical Rescue is actually a metroidvania too, so make liberal use of your map, and if necessary you can make it clearer via the Enhancement menu.

Each has the same name, but they’re all a very different experience, each with their own feel, art style and roster. Take on your opponent Street Fighter style as you try to work out which turtle is the Ryu equivalent (it’s usually Leo). Pro tip for arachnophobes playing the MegaDrive version: don’t pick the jungle planet!

Again, if you’re concerned that these will be dodgy ports, let me allay those concerns; each game ran beautifully. The visuals are crisp, the sound is as on-point as you remember it, and the nostalgia will be flowing like cheese on a margherita before you know it. 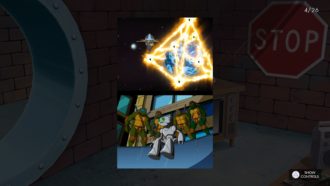 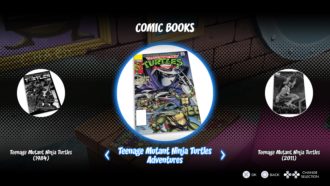 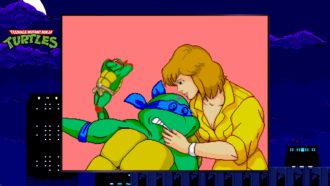 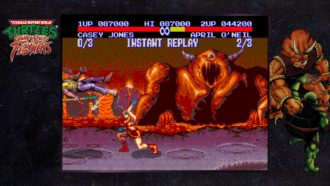 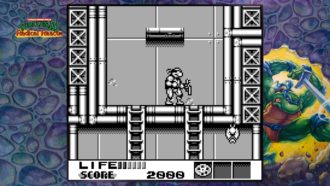 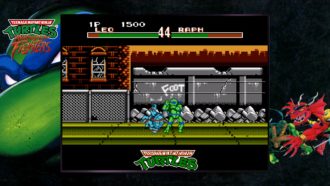 With all that being said, are there any negatives? Is a slice burnt on this lovely little dish? Well in all honesty, not really. If anything, it simply leaves me wanting more. We have all of these titles that are well-preserved with nice new modern features, but perhaps it could have been taken a tad further.

“…visuals are crisp, sound is as on-point and the nostalgia will be flowing like cheese on a margherita…”

Most of the multiplayer titles here have been given online to go with the local. Most, but not all. It’s an odd distinction to have here, when you have all three versions of Tournament Fighters to play but only SNES has online. It isn’t the worst thing ever, but it does make you wonder why some have it and some don’t.

The other small gripe I have, and I will fully admit this is entirely a matter of player choice, is I would have liked to see the ability to incorporate colour filters to the GameBoy titles, similar to how the GBC handled them. The screen isn’t too hard to read as is, but it would have made things pop that much more; perhaps they could have even had it change depending on which turtle you’re using? But I digress.

All in all, Teenage Mutant Ninja Turtles: The Cowabunga Collection is a solid compilation of titles that is perfect for TMNT fans, managing to both port it’s titles well and represent itself beautifully while doing it. It showcases a high point for the series and shouldn’t be missed for those who grew up staring in wonder anytime they saw a sewer grate or wished they owned a pair of nun-chucks. And with that dudes, I’d say that’s pretty much a wrap. Cowabunga? COWABUNGA!

Teenage Mutant Ninja Turtles: The Cowabunga Collection is a well-presented time capsule of classics, porting its beloved titles not only without lag but with modern-day improvements and a smorgasbord of extras to boot. While the collection won’t be for everyone, those willing to dive in and see what Digital Eclipse have to offer should be blown away with what they find. For those who’ve missed that nostalgic feeling, it’s truly time to love being a turtle once again.