The Legend of Heroes: Trails From Zero is a sprawling narrative RPG flourishing with many themes, twists, and turns. As such, this review will ever so lightly spoil and discuss said topics.

Twelve years following its initial Japanese release and a fan localisation in 2020, The Legend of Heroes: Trails From Zero is officially here. Serving as a comfortable, somewhat standalone adventure in the gigantically sprawling Legend of Heroes series, this is an RPG story all about platonic love, finding your place in the world, and living in the echoes of those that came before you. It’s about time this came to the West too — this is a great and emotional journey only at times hindered by its age.

The Legend of Heroes: Trails From Zero follows the lead character Lloyd returning to the town of Crossbell after some years to join the local police department. There, they’re among the crew of a tighter-knit but lower-rung coup known as the SSS (Special Support Section). Rounding out the rest of the group is three more characters, each with their own archetypes. Elie is the more formal and educated member of the party and also the granddaughter of Crossbell’s Mayor. Randy is a charming brute that’s a bit thick and (as at least one character in a JRPG so often does) largely spends his time trying to pick up girls. Last but certainly not least is Tio, the character with the most intrigue. She’s a fourteen-year-old soldier with history and skills in tech, coming from her prior work at a mysterious organisation known as The Epstein Foundation (yes, I raised my eyebrows in concern at that too), discussed often only in whispers.

You’ll get to know each character and their deal quite well. We witness our hero Lloyd feel like he’s walking in the shadows of his ex-cop brother who passed away some years prior under mysterious circumstances. We learn about some of Elie’s reservations about whether or not to follow in her family’s history in politics. Tio unravels her place and purpose in the world to Lloyd. Randy even opens up and tells you why he’s like that. More or less each of these scenes is an intimate one-on-one moment with accompanying twinkly orchestral music. That’s just the start of the magical musical arrangements present. Y’know, the good stuff in JRPGs.

The world of Crossbell is realised incredibly well — something to be expected from the greater Legend of Heroes series but still a feat on its own. It’s separate from the setting of Erebonia found in the Trails of Cold Steel series. Thankfully, (despite some greater deeper implications and nods that I missed as a franchise newbie) this means the world and this story is relatively quite contained. It’s great news for those wanting to get into the IP but daunted about where to start.

Crossbell is something of a contemporary fantasy setting. You’ll be fighting your typical fantasy monsters and exploring temples outside Crossbell’s city walls, but within are more modern stores, a theatre and a casino. Technology in the world is quite advanced as characters will communicate via telephones and use computer terminals. This actually complements the party and the tasks they’re doing well too, as (despite having regular checks in with a sergeant and other officers) they feel more like budding amateurs that are on-the-beat cops.

This blends well with the interweaving webs that are side and main missions on your journey. Side tasks, labelled as requests, are sent from members of the community and often involve clearing monsters from dungeons or going on fetch quests across the city. Two instances quite literally require you to aid the library, going around and collecting overdue library books from the Crossbell residents. Some of these will feel like chores to the player but similarly are forgivable as they provide valuable items and XP, along with adding to the immersion that the SSS is a party for the people.

The main crux of The Legend of Heroes: Trails From Zero is initially pretty unassuming and seems more of a table-setting piece rather than a deep RPG story. Get into those later chapters however and you’ll be interrupting and unravelling conspiracies, surveilling potential dangers at a live theatre show, flinging yourself between a gang war, and more. All while this is happening, from time to time you’ll also be regularly butting heads with local frenemy guild The Bracers, operating as mercenaries with similar goals to you (aiding the people), though with less corporate complexities behind them. 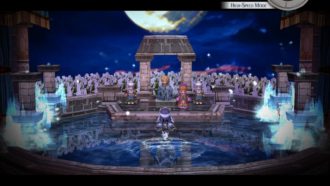 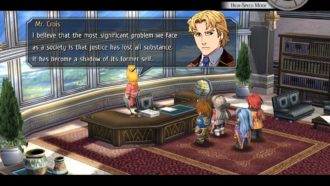 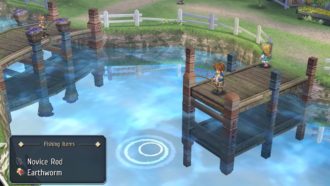 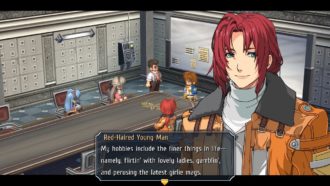 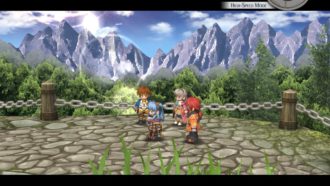 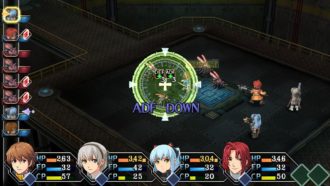 The Legend of Heroes: Trails From Zero is a turn-based combat affair, though it offers more than is stock standard for the formula. Instead of just remaining in one spot, you can also move your party members about across the battle grid when it’s their turn. This is something that I’ll fess up to ignoring at first, only to find it becoming of utmost importance the more you play. Sure, early hours of the game you can get away with keeping each member in the same spot for a battle, buffing and healing when need be. However later hours it becomes crucial in avoiding devastating blows in the form of area-of-effect attacks. Things start to feel tactics and MMORPG-lite here as you too can knock foes away so their AoE now lands on an unoccupied space, sparing your teammate. Juxtaposing this, moving a party member away from the group when they’re marked with an unavoidable attack means only they bear the brunt of this.

“…The world of Crossbell is realised incredibly well”

This only becomes more wondrously complex when you take note of all the other moving combat parts under Trails From Zero’s hood. Barring compulsory battles, players can always see their battles ahead of them. By exploring each hostile environment you’ll see monsters wandering around. Battles only initiate when a party member comes into contact with them. You can use this plotting to your advantage. Run into an enemy and hit them with a weapon while exploring for instance, and you’ll get not only the advantage of being the one to initiate battle but will also get a free round of critical hits your team can dole out.

Your team member gets three primary forms of attack: the default attack (unique to each character as they sport a different weapon type), combat arts (closely resembling spells used by ‘EP’, Trails’ equivalent of mana) and crafts. Crafts are the most exciting and new to me, but Cold Steel fans will note this is largely where that combat mechanic’s roots stem back to. What’s engaging and rewarding about crafts is that they’re devastating attacks that can always be worked towards no matter how well you’re performing in battle. Usage of crafts is determined by your combat points (CP) which are earned not only per hit you get on an enemy but also per hit you receive.

There are occasions I took real a walloping in battle, and it was these crafts that were my saving grace, turning the tide in my favour at the very last moment. As you’d maybe guess, crafts then can’t be cast endlessly and each party member has different CP costs for their unique craft, with the ultimate and most powerful costing a full bar (100 CP). Similarly, you’ll learn combo crafts, a combined and powerful craft used between two companions.

It’s worth also touching on quartz. Across your adventures in The Legend of Heroes: Trails From Zero you’ll pick up valuable materials that can then be used to determine your passive abilities (if I use enough blue quartz I can purchase and slot in a boost to a member’s defence, red can boost attacks and so on). These slot into the orbment part of an inventory. An orbment only has a pre-determined amount of slots but upgrading can be made to allow for more powerful quartz to be inserted. Arrange your orbments in a certain way and you’ll soon see this will also dictate which arts can be used, even revealing some that are otherwise secret. This is daunting at first but is yet another example of how experimentation can be rewarding in-game.

All of those elements are already diverse, deep, and rewarding but that’s before you even take note of the expected using of items, exploiting weaknesses, and using the weapon type advantages each member has (Elie and Tio have a gun and staff, providing more range than their counterparts) and rare instances you’ll get rewarded with a powerful ‘Team Strike’ opportunity to add to the damage output. There’s so much going on in The Legend of Heroes: Trails From Zero’s combat, and I’ve fallen in love with all of it.

The Legend of Heroes series has always been a bit slow to see Western localisations. Taking twelve years for Trails From Zero for instance resulted in a bit of a disservice to itself. Character models, while cutesy and chibi-like, aren’t the best in fidelity and quality. Menus aren’t always the clearest. Of course, they haven’t nearly the same budget or fanfare, but seeing another PSP title in Final Fantasy VII’s Crisis Core come ever nearer, looking as shiny and updated as ever, I can’t help but feel that’s the level of work fans want for the Legend of Heroes series.

With the ability to tweak the auto-saving frequency, and turn on high-speed mode to blitz through the quieter explorative hours, the right steps are taken to add more quality of life. I just wish the onboarding on offer was even more extended. Yakuza as a franchise is finally at a place where releases are simultaneous worldwide and even have English dubs. I want that for this humble, charming JRPG series too.

I’ve closed out my time with The Legend of Heroes: Trails From Zero, I had about 75 hours on the clock. That’s time spent fishing, cooking, going hunting for items and following the greater plot. Amazingly, none of that was spent doing tedious grinding! That time never really felt long. It’s a vibrant, warm and welcoming JRPG and a great entry to the greater franchise. I consider myself now vested in the series, and cannot wait until the follow-up Trails to Azure arrives next year. Bring it on.

As a franchise newcomer, I found my entry point with The Legend of Heroes: Trails From Zero utterly fascinating, tantalising, and enjoyable. Within are some of my favourite blending of mechanics and tidbits within turn-based combat I’ve seen yet. It’s a comfy RPG that you can lose plenty of time to, sinking into the moving character narrative, all set within the colourful world of Crossbell. Character models will occasionally show their age and menus are a little funky. Still, it’s easy to forgive and just hang out with Lloyd and friends, saving the better part of humanity. Team SSS forever.