It’s time. After years of waiting, Bayonetta fans and stans alike have finally got what they’ve been waiting for: a glorious return for the baddest witch in town. Leading up to the game’s release, I wasn’t sure if this game would impress me since it was clear that no great changes would be coming to the series. And while it’s true that there have been no sweeping changes, it turns out that it’s a good thing! Bayonetta 3 is more of the game we love, but with more action setpieces, slicker combat, and more goodies like collectables and outfits.

Bayonetta’s hair might be new, but her game is comfortingly familiar. The game is chopped up into chapters full of hack-and-slash combat, occasionally broken up by cutscenes and story. No more slideshow of still images – almost everything is fully animated. A few brief flashbacks are shown as a slideshow, but this is a callback more than anything else.

The plot of Bayonetta 3 is just as incomprehensible as the previous two titles, but this at least means that any newcomers to the series will be only slightly more confused than returning fans. This probably sounds like a criticism, but I’ve always loved how unapologetic the series has been with its disinterest in expositing its lore. What I’ve been able to glean is that an entity called the Singularity is attempting to combine all the alternate realities of the multiverse into one, for some reason or other. A mysterious woman called Viola enlists Bayonetta and Jeanne’s help to stop the Singularity and save the world. There are collectible journal entries to read if you want more explanation, but everyone else can get right into the action. The more you try to understand Bayonetta, the less fun it is, anyway.

“There are a good few additions to the combat that kicks things up a notch… holy hell is it satisfying.”

If you were hoping for something wildly different from the third game in the series, you’ll be disappointed. However if all you wanted was more Bayonetta, you’ll sure as hell get it here. There are a good few additions to the combat that kicks things up a notch, like the Demon Masquerade ability that allows Bayonetta to unleash devastating demonic attacks during regular combo strings. Another ability, Demon Slave, allows Bayonetta to summon her demons at will and control them directly to deal massive damage. She is completely vulnerable when this is active and it drains magic power like crazy, but holy hell is it satisfying. The new abilities make combat easier — I remember dying far more often in Bayonetta 1 and 2, and I assure you it’s not that I’ve gotten better — so the game might not be as challenging, but the exchange is worth it. You can turn the difficulty up or down to suit your liking.

The new playable character, Viola, fights with a katana as well as her own demon buddy, a giant cat named Cheshire. Her combat style is less fluid than Bayonetta’s as it’s based on parrying attacks rather than dodging, and I wish she got half as many alternate weapons as Bayonetta does. but it’s a good break from Bayonetta every once in a while. She’s just as chaotic as Bayonetta is, but with a punk-rock attitude.

The action cutscenes, one of the most iconic aspects of the series, are amped up to eleven in Bayonetta 3. There isn’t a single level that doesn’t have multiple cutscenes of Bayonetta kicking major ass. Every major boss battle ends in a cinematic climax, just like the previous games, but now this extends to mini-boss battles, and even sometimes just for the hell of it.

The over-exaggeration extends to the dialogue scenes too, but not exactly for the better. It looks unnatural a lot of the time, which is quite distracting, especially on some NPCs whose character models haven’t been given the love and care the main cast has. Dialogue scenes have the characters waving their limbs about in odd directions, at best only looking a little off and at worst looking like a cutscene from the Sonic Adventure series. The graphics in general just don’t look current gen — it’s not noticeable in the thick of the action, so it’s only a minor issue, but it’s definitely noticeable in cutscenes, and, of course, in handheld mode. 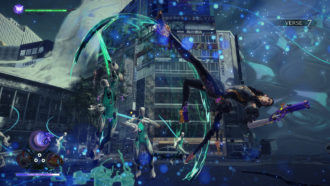 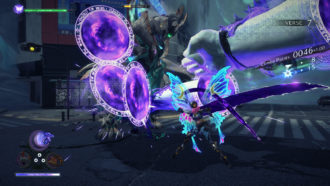 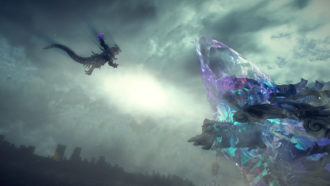 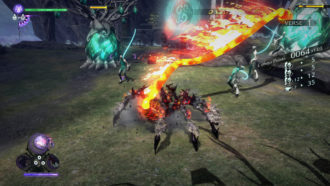 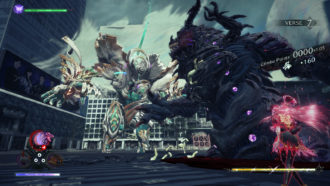 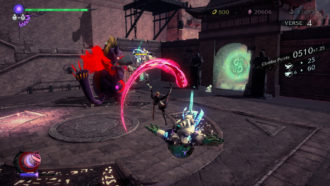 Level design is more spread out and open this time, allowing Bayonetta and Viola to use their Demon Masquerade powers to quickly cover the landscape in a flurry of leaps, flutters, and jumps, depending on the weapons you have equipped. There are various secrets to find in each level, as well as platforming puzzles and extra enemies to fight. It provides the best reason yet to replay levels without it feeling like a chore.

While Bayonetta and Viola are off having all the fun, Jeanne is somewhat relegated to a few side-scrolling adventures. Although the retro-inspired ‘stealth’ levels are cute, they’re hardly engaging, and I had been hoping Jeanne would be a main part same as Bayonetta and Viola.

Bayonetta’s adventure takes her to multiple different alternate universes of her world, and meets a variety of different versions of herself. I was afraid this would be some kind of gimmick, and unfortunately, they didn’t star in their roles as much as I wanted them to. The hilarious hijinks I was expecting from a game with multiple Bayonettas just didn’t happen. But it’s at least a genius way of diegetically introducing new weapons and demonic beats for Bayonetta to use. Each Bayonetta is chaotically different, with a different main weapon and demon. Shortly after meeting them, they get added to your arsenal to use – if you wish. This is a far more interesting way of gaining new weapons than the original, which had you scrounging around for multiple pieces of an LP record. There are still some extra weapons and demons that can be found outside of the critical path, however, so you’ll be rewarded for exploring each level.

Bayonetta’s new voice actor Jennifer Hale does an admirable job, matching Hellena Taylor in energy and sass. I think we’ll all miss Taylor’s iconic voice in the role though, despite recent controversies.

Do you want more of Bayonetta 1 and 2? That’s Bayonetta 3! It keeps the heart and soul of the first two games in every sense, but adds even more fun ways to pound your enemies into the dirt with style. Its chock-full of action set pieces, each more ridiculous than the last — it stays at 100% almost the whole time. Our favourite witch is back in black!