Dual Universe allows players to mark their names in an expansive colony. The ambitious Kickstarter game has officially launched after a few years of development and early access. Unfortunately, developers Novaquark have released a hollow universe of mistakes and failed promises with an unflattering subscription model that has already put this game back into cryosleep.

A colony awakens ten thousand years after Earth’s demise. With new land, planets, and a galaxy to uncover, players take the role of one of these many settlers with the once-in-a-lifetime opportunity to rebuild society.

“Since launch, the game hasn’t received much of a following and continues to dwindle in active players.”

Distance is measured at a one-to-one scale in Dual Universe and there are many chances to find something new and create a space for your own. This MMO isn’t about choosing a class and taking on a role but about finding your niche and skill. Do you want to be a base builder? Perhaps a colossal warship designer? Or maybe an interplanetary trader?

Once players decide what they enjoy most about Dual Universe, that’s where the best of the game shines. Grouping up with others, offering them services, and helping build a new colony of humans on unoccupied land has real promise.

However, a colony isn’t much of a colony with a small player base. Since launch, the game hasn’t received much of a following and continues to dwindle in active players. In my playtime, I saw fewer than a couple dozen people. No AI and NPCs exist in the vast blank slate, making the world even less lively. Everything relies on player creation and activity in this singular server universe. With a decent group of friends, this might be a fun time. Otherwise, there’s not much to do besides create and establish. 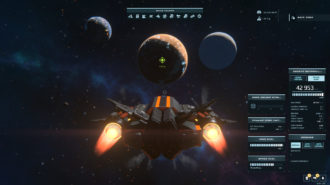 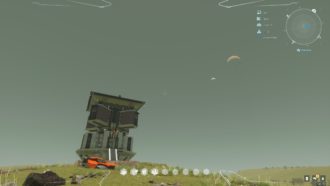 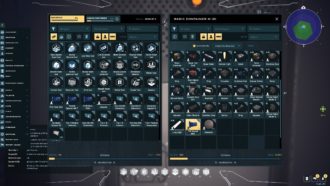 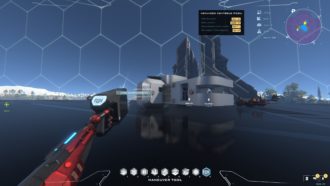 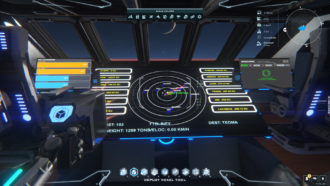 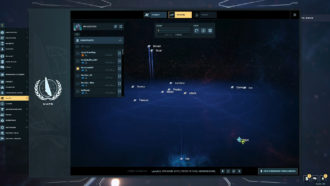 After first launching Dual Universe, players are greeted with a handful of basic tutorials that take roughly 30 minutes. Sadly, they don’t explain the entirety of the depth of voxel building and other systems in the game. Depending on your experience with these creative online games, watching several additional hours of YouTube tutorial videos is compulsory to understand what to do and how to do it. Even after all that, players may still need to ask other travelers in the game for support. Dual Universe is a massive playground of possibilities but can be frustratingly complex.

Building the first home base is where the usability of crafting tools becomes an inherent problem. Erecting structures around a base is annoying, clunky and not as straightforward as expected. Players can start building a structure connected to their base and use the directional arrows on their keyboard to move away, then start crafting. It’s just not as simple as it should be and is constant throughout the MMO’s many mechanics.

Once travellers get the hang of the mechanics, gameplay boils down to crafting, building, and resource gathering. It’s a cycle of deciding what to build, determining what materials are needed, and mining those materials. Players will quickly learn that mining takes time, as the machines are slow and surface ores are limited and do not respawn. Scarcity has become a problem, and users are digging up too many limited resources, adding to operating issues and innate concerns with mining as a viable income.

Eventually, automation of gathering and developing factories can be done using a comprehensive schematic system. Factories help with organising ores and auto-building structures and systems. This is only one path or business a player may choose to venture into. Another may want to become a pilot and fly resources back and forth between worlds or become a master at designing space bases or freight ships. Fight for high-tier resources, for political domination, for an economic monopoly, or just for the fun of it. There is an extremely high ceiling for what players can become with the tools at hand.

For those who loved the experience of Star Citizen, Elite Dangerous, or No Man’s Sky to an extent, the feeling of freedom and creativity in Dual Universe is fascinating.

I think we’ve got a problem

Novaquark has developed some incredibly ambitious technology to make Dual Universe. Its voxel-based construction all on one simultaneous server is an outstanding feat. The game can supposedly handle approximately 200 players in one area with superb server updating frequencies. There are detailed developer diary videos that give a sneak peek into what went into making this world.

These technological goals seem to be flat-out failures. The server technology suffers from individual player constructs and terraforming. The game begins to stutter uncontrollably when flying or walking through areas full of player creations. This is due to the bandwidth and networking bottlenecks with feeding large amounts of data about the game world and then GPUs struggling to render it fast enough.

“Considering all these concerns, the monthly subscription fee is a hard sell.”

Graphical errors are also rampant. Voxels will often glitch and look awkward or not placed correctly, which makes building anything or digging paths into the land bothersome. The user interface and HUD may be some of the most unorganised in an MMO. Admittedly, there are a lot of systems at play, but the menus and navigation make it a puzzle to see your ship’s status, view objectives, or comprehend maps.

It doesn’t help that the game itself doesn’t look great. While everything in space does look reasonably nice, the planets themselves suffer from barrenness. A lack of variety, flora and fauna, makes the game feel even more empty. Even though these newfound worlds are supposed to be blank canvases for players to build towns and structures, there really needs to be something intrinsically interesting about them. Prebuilt cities or animals walking about would have been a great way to keep players motivated to explore from the first minutes of playing.

Considering all these concerns, the monthly subscription fee is a hard sell. Understandably, the servers are massive (despite their tech issues), and Novaquark need funds to keep them running, improving, and expanding ideally. If they genuinely hope the “game remains live for years to come”, a monthly subscription fee for an empty world isn’t the trick.

The voxel creations and freedom that Dual Universe offers are pretty impressive. It’s a concept with a lot of potential. However, the failed execution and many bugs leave this game dead on arrival with honestly no reason to play unless it ever receives a resurgence in players and a massive gameplay overhaul.