The newest generation of Pokémon has arrived with the release of Pokémon Scarlet & Violet. Unlike the somewhat spinoff nature of Legends: Arceus from back in January, this dual release marks this year’s proper mainline entry into the biggest gaming franchise in the world. Whilst that nostalgia-fueled dopamine hit still exists from catching them all and building your kickass team, the game also fumbles over its own ambitions as the franchise sloppily transitions into an open-world Pokémon experience with traditional catching and battling mechanics—running sluggishly on aging Nintendo hardware.

Adopting a traditional Nintendo style of storytelling, Pokémon Violet opens with some heavy-handed and slow dialogue alongside unskippable and painfully simplified tutorialisation. Potentially great for newcomers and very young audiences, but not for those of us who have grown up with the series since its inception. Lacking some of the grandeur of past titles, players won’t immediately find themselves tasked with saving the world. Instead, the plot largely revolves around an academy you’ve joined as a new student, the people you meet along the way, and a legendary Pokémon/all-terrain vehicle that accompanies you on your travels.

Pokémon Violet is your standard, turn-based, monster-catching fare—albeit with an open-world twist. Taking learnings from both Arceus: Legends and Sword & Shield before it, the game is one connected world with the ability to explore in any direction and engage in different objectives. Pokémon are found out in the open rather than through random encounters, a largely praised decision first implemented with Let’s Go: Eevee and Pikachu. It again works like a charm here, facilitating a less randomised and less frustrating experience that gives more agency to the player and what battles they want to engage in. The one caveat here is that some Pokémon are incredibly small. This makes sense within Pokémon lore, but in practice, it makes for too many instances of accidental battles and squinting at the small handheld screen as you attempt to decipher one collection of pixels from another. Mostly inconsequential, but something to be wary of especially for those with visual impairments.

“…developer Gamefreak has decided to forfeit polish in favour of inventiveness—as if that was the only option.”

The Paldea region of Pokémon Scarlet & Violet is full of European-inspired villages interwoven organically amongst green pastures, lakes, and mountain ranges. It’s a great trajectory for the Pokémon series, allowing exploration to feel natural and exciting. This seamless world as well as the game’s cooperative functionality are really the two big benchmarks for this specific generation. It feels good to have that level of freedom and it feels immersive to roam around without loading screens. Again though, every piece of praise comes with its own caveat, and with the world design, it’s that the environment lacks both detail and creativity. I don’t know if it’s a lack of technical power or a lack of imagination, but the wonderous regions of past Pokémon games are just not found here. Tens of hours in and you’ll still be moving through green pastures and mountainous ridges.

As the game progresses you’ll gain access to a motorbike/Pokémon companion who is part of the game’s story and traversal system but conveniently not an active member of your battling party. At set points that Pokémon will be able to dash at higher speeds, float on water, and even glide through the air. There is a level of freedom here that’s quite surprising for the Pokémon series. Gliding onto the roofs of houses, for instance, showcases a level of movement liberty that feels very foreign. The downside here (there’s always a downside) is that your vehicle/friend is often associated with some of the game’s more obvious glitches and awkwardness. It’s almost as if developer Gamefreak has decided to forfeit polish in favour of inventiveness—as if that was the only option. 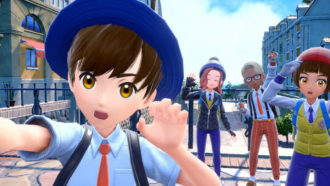 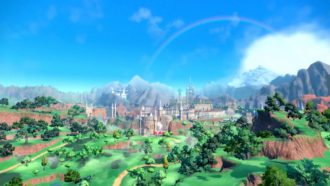 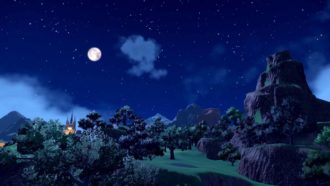 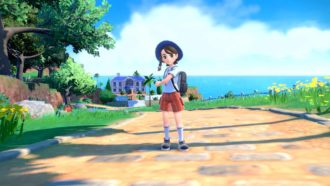 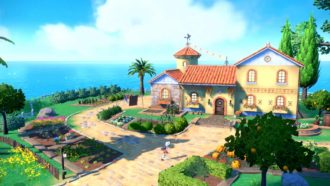 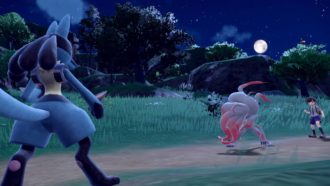 The glitches and exploits found within Pokémon Scarlet & Violet are undeniably funny, though actually playing the game didn’t feel to me as ludicrous as what some YouTube compilations may lead you to believe. The occasional visual glitch is fine, but what I find largely unacceptable is the shockingly poor performance. Pokémon Violet is not graphically or technically impressive enough to warrant such obvious performance shortcomings. The lack of environmental detail is disappointing, the poor texture quality is sad, the tiny draw distance is scoffable, and the framerate issues are pathetically apparent. It’s a game that constantly demands you don’t pay attention to its visual setbacks.

These issues have gameplay implications too. You could be scooting your way into a dead end, unaware of if there’s any reason to go there or not because the items and Pokémon simply haven’t loaded in. A brilliant open-world game lets you observe your environment and puts the power into the player’s hands to go off in the direction they think looks promising. A terrible open-world game doesn’t even allow you to see those features, removing any agency from your decision-making. Take a guess at which camp Pokémon Violet falls into.

“It has that delightful edge that Pokémon is yet to lose 25 years and 9 generations later.”

Introduced into this new generation is of course a new wave of adorable mons. It’s hard to deny that Pokémon is capable of forming an engaging cast and I’ll happily fight anyone who isn’t charmed by the likes of Lechonk, Fidough, Klawf, Greavard, and more. And for all the criticisms you can rightfully lodge at Pokémon Scarlet & Violet, it’s hard to deny that there’s this insidious quality about these games that have you coming back for more, constantly looking to see what new mons you can uncover or adjusting and advancing your battling roster. It has that delightful edge that Pokémon is yet to lose 25 years and 9 generations later.

Some new mechanics are introduced to this iteration of releases including being able to ‘Terastallize’ a Pokémon, which gives it a gourdy crystal growth on its head, strengthens it, and potentially changes its elemental typing. It’s largely gimmicky and a detour from other one-time gameplay mechanics such as Gigantamaxing in Sword & Shield. I don’t know why Gamefreak feels the need to include these little additions rather than advancing the old systems they put in place, but at least it’s not a detrimental inclusion to the overall vision.

Pokémon Violet isn’t a bad game, but it is a game held back by both aging hardware and a game developer who doesn’t quite have the technical know-how to shift the biggest gaming franchise in the world into the modern age. It’s hard to deny the strength of the nostalgic glory that Pokémon can bring out of the consumer, not to mention the positive changes that were made here, allowing for a more immersive and communal journey. The game has all of the pieces needed, but further refinement was required to polish the experience and advance the systems to bring them in line with expectations. I’d like to say we’ll see if Gamefreak can make those fixes with post-release updates, although we all know they’ll instead be hard at work on next year’s instalment—and possibly that’s the real problem here.

Pokémon Scarlet & Violet represents the power struggle between innovation and execution. There’s so much promise in the idea of a fully integrated, cooperative Pokémon game, yet the final product I experienced with Pokémon Violet falls short of those aspirations. There’s still a lovable structure found within the game, driven by a more immersive world design and a new generation of adorable mons. Though the polish is lacking, failing to completely realise the ideas put in place and falling short of expectations.