Sonic Frontiers Review – Against all odds

It is safe to say that Sonic Frontiers is one of the most anticipated games of the year. This is the blue blurs first big title since Sonic Forces almost five years ago. During his gaming hiatus the speedy little hedgehog has been on a roll with two highly successful movies, and as a result, Sonics profile is the highest it has been in a long time, so this title is a bit of a big deal.

I have to admit that after seeing the trailers showing Sonic running around some (relatively) realistic island, with random rails and whatnot all over the place, I had concerns. An open world Sonic game sounds like a cool idea, but what about all the colour, the action and the sound that I love the series for? Now that I have had the chance to finish the game and know it intimately, I am impressed by what they have set out to do, and achieved. Somehow, Sonic Team have pulled this off and made the best Sonic game in a long, long time. If this is what future Sonic titles are aiming for, I’m here for it.

The biggest swerve with Sonic Frontiers is that despite initial impressions, it is not an open world game where you wander one large area for the entirety of the experience. Thank heavens for that, because that truly could have been a boring idea. The area that we have all seen in the announcement videos and in the demo is called Kronos Island and it turns out it’s just the first of five large and unique ‘open zones’.

The spoiler-free version of the story goes that Sonic, Amy and Tails crash land on Starfall Islands in a sort of Bermuda Triangle event. Sonic finds himself alone trying to uncover the mystery of the islands, what happened to the previous inhabitants and save his friends in the process. Along the way, he encounter’s various unique enemies to battle, items to collect and fights some truly spectacular ‘titans’ as we make our way through the story.

“…when things start to get real it felt like Sonic was really digging deep against the odds….”

The story in Sonic Frontiers has heart. It all starts off fun and games with a slow burn through the early scenes, but when things start to get real it felt like Sonic was really digging deep against the odds. I can’t recall being this engaged with a Sonic storyline before. I noticed with English voicing Sonic’s voice sounds a little deeper than you might expect, which is a little jarring at first. It’s worth noting that it is the same voice actor who usually voices him, so this is a deliberate decision reflecting that the story is notably more serious than in many previous titles.

The gameplay loop is simple but effective. Sonic explores an island to find ‘memory shards’ to help save his friends. He completes ‘cyberspace’ stages to earn keys to unlock vaults containing Chaos Emeralds. All the while battling enemies along the way. This culminates with the island’s boss in an epic battle, then we rinse and repeat. My favourite is the third island ‘Chaos’, set in a volcanic area where the landscape is dusty and desolate, set above the clouds. It features a groovy contrast between nature and machinery, a surprise temple section and some great mini games to boot. All set to a light, piano soundtrack that drives the atmosphere home.

There were frequent ‘wow’ moments for me throughout Sonic Frontiers, where I just stopped for a moment to take in the views and the scenery. The verticality of the game is impressive, some of the towers you need to climb and find your way to floating areas are pretty spectacular. Sure, the rain effects and some of the cut scenes (which are in-game) are a bit iffy but overall they get the mix right and this makes for some delicious visual candy. There is some pop-in as rails and platforms come into view though, so it would have presented as more polished if they found a way to blend them in a little better. 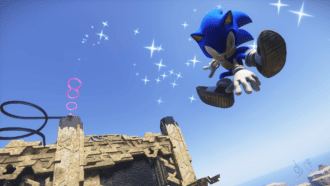 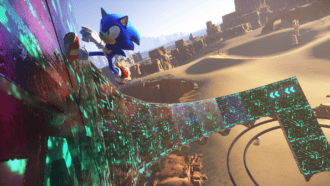 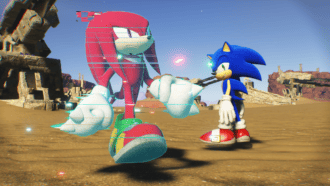 As expected, each of the islands also have some unique enemies to take on. Foot soldiers aside, who you can take out pretty easily, each island has a few larger guardians dotted around the map, which could be considered sub-bosses. These baddies present a harder, more strategic challenge and require the right approach to take them on effectively. Whilst they can be frustrating while you figure it out, once you do, it’s time to lay the smackdown. Some of them feel like they have personality and I actually felt a bit bad taking them out.

I’ll call out Squid in particular from the first island, a bird type creature with a tail of light. If you want to fight it, find a way to jump on its tail and run up it whilst it twists, twirls and fires projectiles at Sonic. It’s an exciting battle, and the thing I most like is how Squid just flies around minding their own business most of the time but appears to enjoy the camera. Cut scenes are in real time, so keep an eye out for them photo bombing your conversations with other characters. I got a decent chuckle out of it, it felt like Squid was always there in the background. I could call out a few other favourites, but, better for you to encounter them yourself.

Combat wise, Sonic Frontiers works… for the most part. Unfortunately, there is a skill tree, which is always cause for concern in a Sonic game, but there are only a handful to unlock the along the way. I found that you will naturally accrue the necessary skill points and it serves a function to control the level of challenge as you go rather than anything to get upset about. After unlocking everything I did head back to the first island and it would have just been far too easy if you got those skills from the start. Regardless of whether you mainline the story or take your time to explore, you will get the skills you need by the time you need them, so don’t stress. 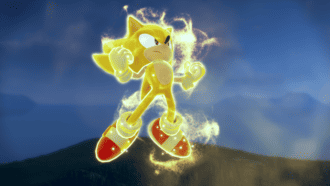 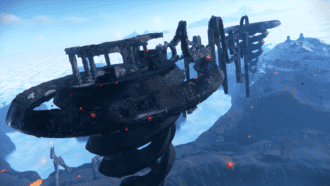 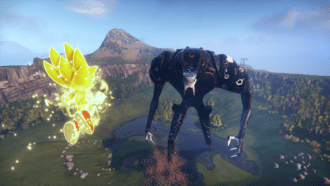 The different moves and strategies can feel a little complicated at times, because different enemies require different kinds of attacks. Brute force usually doesn’t work against Guardians or Titans. If you tackle one the wrong way it’s easy to make things very difficult for yourself. This can result in a little frustration, but once you figure out the right plan the fun factor returns. In Sonic Frontiers you can easily hit a button for a tip should you need a hand with your approach or an enemy’s weak point.

When it comes to combat, my tip for you is that parrying is your best friend. Activated by pressing both shoulder buttons when an enemy attacks, it will give you a chance to either reverse their attack or give you the opportunity to deliver massive damage.  This is an essential skill for the Titan fights and will make the difference between victory and a slow painful death. Guardians and Titans are not to be messed with and will take you to school given half the chance. These fights are spectacular showpieces, so make sure you have plenty of rings when you start the battle because the hard rock music kicks in and it’s on like Donkey Kong.

Incredibly, although it took them twenty years, Sonic Team finally figured out how to nail controlling Sonic in 3D. In Sonic Frontiers playing as Sonic is a joy as he zips around the playing field. Sonic is so controllable, responsive and intuitive. It won’t take long before you are screaming around the islands grinding rails and bouncing all over the place like a pro. Speed wise you can level his speed to 99 if you really want but I left it at about level 10 which was fast enough for my taste, but go for gold if you have the need for speed. If you do find that you go a little too far in the speed department, it’s easy to reduce it to a more comfortable level.

Aside from all of the exploration, Sonic Frontiers also features a decent helping of old school Sonic stages dotted around the map, called Cyberspace. You will need to complete these to earn keys necessary to obtain the coveted Chaos Emeralds. Although set in familiar environments these present a new set of challenges both from third person and side scrolling perspectives. These are a nice palate cleanser from exploring and provide that classic Sonic sugar rush of colour, speed and banging tunes; they also play a little better then a lot of the most recent 3D Sonic titles as well.

I would be remiss if I didn’t mention Big the Cat and his Fishing game. So, if you want a break from exploring and want something a little more chill than a Cyberspace stage, why not sit down lakeside with Big for a spot of fishing? Catching fish earns points you can use to buy items like skill shards, memory shards and vault keys. Be careful though, it may be tempting to buy a ton of vault keys and progress the game that way, I feel like when I did that (once) I might have progressed the story accidentally. So I think best practise is to earn vault keys legit via Cyberspace.

Sonic Frontiers was definitely a risk, but SEGA and Sonic Team are no strangers to rolling the dice and operating on pure ambition. If we are honest with ourselves, for too long, Sonic has come up short on the execution. But this time the iconic speedster has truly delivered. Open world games might be a dime a dozen, and they have not reinvented the wheel here. Instead, they’ve successfully transported Sonic to an intriguing new world that is a pleasure to explore, while maintaining some retro flare and an engaging story that will make fans happy. Put simply, Sonic Frontiers is the best 3D Sonic game ever made, and a fantastic step in the right direction that bodes very well for the future of everybody’s favourite blue hedgehog.