The Chant Review – Not a cult classic

The Chant comes from new developer Brass Token, who clearly have a love of 70s horror aesthetic, with the hopes of bringing that vibe to a modern survival horror video game. They call it a cosmic-horror, which ties into some of its themes around spirituality and its “this is clearly a cult” setting, with ambitions of being a mix of action adventure, puzzle solving and some unique mechanics in how you navigate each area. It’s not a bad concept by any means, but clunky combat, linear progression with simplistic puzzles and some rough visuals means The Chant is unable to live up to its own goals, resulting in a mostly forgettable horror game that isn’t even all that scary.

As a cheesy horror throwback, The Chant does a decent job of setting things up. Protagonist Jess joins the Prismic Science Spiritual Retreat on Glory Island to heal from a past traumatic event. The name of the retreat alone should be enough to put her off, but her friend Kim assures her that it’s definitely not a cult (it’s totally a cult). It doesn’t take long before things take a dark turn, where a group chant (!) opens The Gloom, a parasitic dimension that engulfs the island, taking control of everyone and everything in it, along with filling it with a bunch of hideous beasties roaming the place.

It’s not a terrible setup, but the story doesn’t go to much depth from here. Your friends get possessed by The Gloom one by one, and it’s up to you to stop them and ultimately survive the island. The past trauma that haunts Jess is often used against her with characters blaming her for the past tragedy she has experienced, but we don’t get to know Jess much more beyond this event (that is never shown, only referenced occasionally). It doesn’t give us a lot of opportunity to truly connect with her, or the members of the retreat, with most lore told as readable pickups, so things feel pretty one-dimensional as you try to help or stop them from being big demonic jerks.

It’s even more difficult to connect with the cast considering the character models themselves are… not great. They look about a generation (or two) behind, with soulless eyes and awkward animations. They just feel stilted and not like real people, which makes them difficult to care about as they get consumed by the darkness. Despite the janky animations though, at least the retreat itself looks as creepy as you’d hope. Certain areas are bathed in Gloom of one of several colours, which works as a way of blocking off areas if you don’t have the matching coloured prism yet, but also means when you do navigate the areas they have a unique and atmospheric feel, bathed in light, demonic insects flying around and usually a healthy serving beasties. Monster design is a highlight; they’re the right level of gross and and daunting as they hit you, spit at you and just generally get in the way.

“…the overall clunkiness removes any tension that might have been there…”

During the 6-ish hour campaign, you’ll frequently return to a hub of sorts where the characters are all hanging out, before heading off onto different paths to explore the island, whether that be deep inside some mines or sussing out the local creepy lighthouse. The loop is classic for a survival horror; head to an area, figure out how to unlock a door, then move on to the next area, rinse and repeat. This kind of iterative collect-and-progress style of survival horror leaves The Chant lacking when it comes to its overarching gameplay. It’s a far cry from the devilish and awesome puzzle rooms we’ve seen in Resident Evil, for example, with the components needed to activate a door usually laying around somewhere just off the beaten path. You’re not accomplishing much, just picking up random disparate parts to get to the next checkpoint.

Of course, along the way you’ll encounter monsters that are eager to halt your progress. Jess has Mind, Body and Spirit meters that have to be restored using consumables; lose your mind, and you’ll start to panic, meaning you’ll hear voices and the world will look a bit more grim. This decreases when you’re in a dark space, so it’s worth keeping this meter full so that panic doesn’t set in. It’s not quite as well-implemented as games like Eternal Darkness that it’s clearly referencing, but it works fine enough. Your Body meter acts as your health bar, and your Spirit meter is how you use special abilities, along with allowing you to meditate to regain some of your Mind. 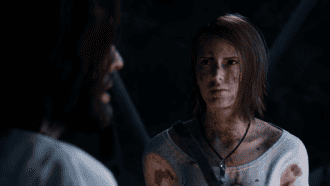 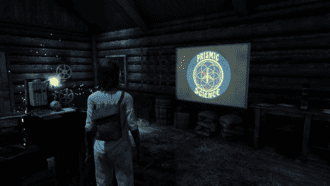 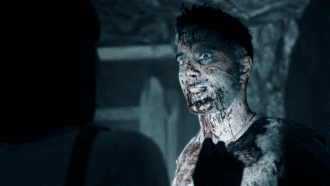 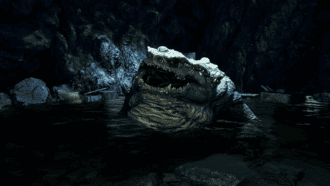 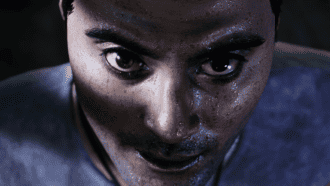 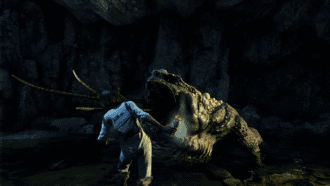 Balancing the three meters in The Chant some getting used to, but once you figure out how they all work together they’re managable. What doesn’t hold up quite as well is combat, which is frustrating and sometimes even a chore. You’ll need to craft weapons like a Sage Stick or Fire Lash based on pickups, but they break after several hits and you won’t always have the resources to make more. Melee attacks are either light or strong, but they mostly result in flailing about and dodging occasionally as enemies swipe at you. Annoyingly, the larger dodge just makes you awkwardly fall over out of the way, which I guess is “a horror trope” but mostly got irritating when in the thick of things. You can also throw salt or oil to do minor damage and stop enemies from using powerful moves. It’s not offensively bad but it’s not fun, either, and I mostly avoided combat where possible so I could get to the next puzzle.

A wrinkle that does change things up is that when you get more prisms, you’ll get more prism abilities. These include ranged attacks, spikes that you can summon from the ground or even literal demons that can stop enemies in their tracks by grabbing hold of them, which is admittedly a cool visual. The abilities take a while to recharge so they can’t be relied on that often really, but they did mix things up enough to prevent combat from being totally boring. A couple of specific boss battles are also exceptions to the “hit and dodge” approach. While this will fell most of them, a couple have some mechanics that require you to think about your surroundings and deal with other elements , which made them stand out compared to more bland battles with grunts.

Beyond that, you’ll be solving puzzles, but most of them are pretty basic. Doors with specific symbols on them need the right pieces to match, but they’re often just laying around or near a big enemy that has to be killed first. Given the areas within chapters are relatively linear, it’s usually about just finding the right thing that slots into the other thing, so they’re simplistic in nature and don’t get the brain working at all. There are a couple of exceptions to this; one puzzle has you following beams of light and redirecting them to aim in certain directions, and another in a greenhouse requires you to combine chemicals, but they stand out as memorable because the rest of the exploration and “puzzles” are so dull by comparison.

The aforementioned coloured prisms are used to give you access to certain parts of the island, but because you collect them as you progress the narrative, for the most part they just stop you from going to areas you’re not supposed to access yet. One of the biggest issues with billing something as a “horror” though is that it needs to evoke some sort of emotion, or fear, and The Chant just doesn’t do that. It has all the right elements that should work, in terms of dark environments, gruesome-looking monsters and other tricks like Jess hearing voices and other strange sounds, but the overall clunkiness removes any tension that might have been there and what’s left is a sort-of spooky experience that leaves a lot to be desired. It’s not bad… it’s just disappointing.

The Chant storms out of the gates with a kooky but intriguing concept of cosmic-horror, but simply isn’t able to live up to its own ambitions. It has some good ideas if you look hard enough, but the clunky combat, milquetoast puzzle solving and forgettable story firmly plant this one in the category of B-Grade horror, which, to be fair, is definitely the vibe the developers seem to have gone for. Even with a few good foundational ideas with the use of prisms and a couple of cool boss fights helping The Chant slightly redeem itself, the biggest misfire is that it’s just not that scary, and without that, this cosmic-horror is just a cosmic-snooze.