The Dark Pictures Anthology: The Devil in Me Review – The Most Dangerous Game

The Dark Pictures Anthology: The Devil in Me is the season finale of The Quarry and Until Dawn developer Suppermassive’s first horror anthological series. It’s more of the same known formula: control a group of individuals in a horrific and deathly setting, making choices and completing QTE prompts to hopefully make it out alive. While being quite familiar, The Devil in Me actually mostly pulls it off, providing the best setting and experience in the anthology series yet.

The Devil in Me follows a small TV production company called Lonnit Entertainment. A true-crime-obsessed group of five, the company has been struggling to keep their series all about serial killers going. In one last desperate plea, they need a season finale so good they keep those lights on. Head honcho Charlie Lonnit gets a call from a mysterious figure claiming to have a promising visit ahead of them at a hotel. This hotel is a recreation of the infamous and hotly debated Murder Castle owned by America’s first serial killer H. H. Holmes. The World’s Fair Hotel, as the game describes it, was a place populated with secret and moving walls, traps and deadly games within.

The hotel the group have found themselves within is also just as deadly. A figure dressed up to heavily resemble Holmes stalks them throughout the eerie, dimly lit halls. Fail the known gameplay of Quick Time Event (QTE) prompts or choices, and characters you’ve grown attached to may die directly by his hand. Or maybe they’ll get a spike right through them. Perhaps they’ll be flattened by a closing wall. The possibilities are morbid and bloodier than ever.

Serving as a little bit of slasher and a lot like the Saw series, I found this to be the most thrilling adventure in the Dark Pictures Anthology thus far. The feeling of claustrophobia is done really well; the walls are well and truly closing in. Paths you once explored will be gated off by obstacles not there moments prior. Mannequins are often found in the most unexpected places. Suspicious markings on floors may indicate trap doors, but only to those more observant. Supermassive’s experience in horror sound design puts in the work here as you’ll be on edge just from ambient noises such as floorboard creaks or the sound of the hotel settling.

What’s most curious about The Devil in Me is that it’s certainly more of an experiment in setting and vibes than anything else. The seven-hour runtime (longer than any of the anthology entries prior) leaves more time for the middle act to linger and amplify the atmosphere but also results in the opening doing the same to less effect. That first shoe takes a bit too long to drop but when it does the wheels are in motion, ever-shifting like the walls you’re trapped within.

By the time I wrapped up my first playthrough, I was quite satisfied with its resolution, though in some areas I was left a little more wanting. The ending isn’t too convoluted as most of what you see is what you get. It could’ve gone deeper on the background and nature of the villainous figure running the shop, but at least it didn’t muddy or circumvent foreshadowing in the way that Little Hope did. The idea of an exploitative group of true-crime-obsessed nerds getting their comeuppance is so excellent that I wish it went in just that little bit more. When many discussions have been had about the ethics of true crime documentation and its celebration of misery, what better game to contribute to those talks than the charming, schlocky horror Supermassive provides?

Making bonds and fighting ’til the death

The Dark Pictures Anthology: The Devil in Me’s primary cast is made up of five. The aforementioned Charles (Charlie) Lonnitt, Kate (played by BAFTA winner Jessie Buckley) is the on-screen reporter and talent at Lonnitt Talent, having a deadpan aura about them and Mark is the cameraman and Kate’s ex, finding himself in this tension between the constant butting heads of Charlie and his previous flame. Rounding out the cast are my favourites of the bunch, Chief Grip Jamie and intern and sound engineer Erin.

By no means do the dynamics or characters on their own hold up to those before them in the still near-perfect Until Dawn. Though, they’re my favourite of each of the Anthology games. Feelings and relationships can blossom in unexpected places. It genuinely felt like some of the independent hard-headed characters, like Kate and Charlie, were gradually bettering themselves and learning to work better together to survive. When I lost some of the cast (two out of five in my run), I was actually upset to no longer have that member of Lonnit Entertainment around.

What I will say still needs some work in Supermassive’s titles are character models and animations. There was a clear visual quality disparity between say, Kate, performed by the most known actor of the bunch, and Erin. Characters will also from time to time have a bit of that glassy dead-eyed look to them, not always looking quite natural. Movement similarly is a bit stiff. Instead of a brisk walk to navigate around faster, players can now hold the left bumper on their controller to do a jog and sprint. This is a welcome addition to speed up the quieter moments but a little awkward and not always necessary – if the game wants you to run in a section, you’ll automatically be running.

“…What’s most curious about The Devil in Me is that it’s certainly more of an experiment in setting and vibes than anything else.”

Tough choices and tense QTEs that can make or break a character’s last breath are plenty in The Devil in Me. Some options I thought surely were bait and traps instead ended up actually being the route of safety, bringing someone’s run to a harsh end. The elusive and mysterious Curator, played by Pip Torrens also returns to introduce and close the story but also provides crucial hints. This time, these come in the form of quotes from writings of Sir Arthur Conan Doyle’s Sherlock Holmes. Fitting, given the very name of the owner of the original Murder Castle. As always, the Curator is a delight and chatty, if somewhat unnerving, reprieve from the action. 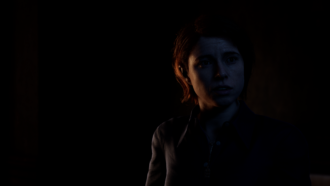 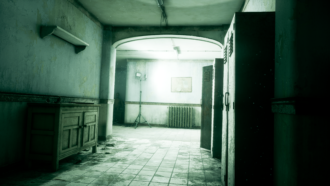 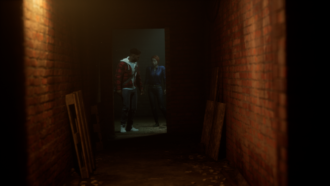 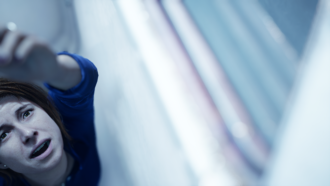 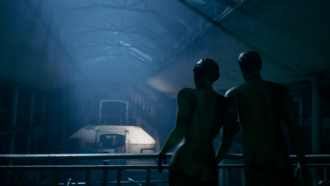 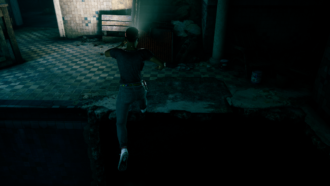 As is tradition for Supermassive games, you can also receive premonitions for potential dangers and deaths or moments of opportunity that lie ahead. Find a specific medical diagram somewhere in the castle and you’ll be subjected to these snippets. A good job is done here in providing breadcrumbs for you. Some are plain as day, making it absolutely clear when it comes to a crucial final step for survival in-game. Others are just vague enough, so as not to spoil the rest of your journey.

The Dark Pictures Anthology: The Devil in Me, at times, has the best exploration yet. As each of the members of the team are handy with certain tasks, they naturally have equipment with them that will both complement this role and obtain goodies. While welcome in just distinguishing this horror affair that much more, some of these are implemented to mixed results. Mark’s camera can be used to gather and store important information in your exploration, while he also has a tripod stand to reach high-up objects… used only once in my playthrough. Erin has a boom mic that is used to track down noise sources as a means of guidance in sections where halls may be dimly lit, aiding navigation but also a sense of dread. On the flip side, Charlie has business cards that can pry open drawers and obtain missable readables. I wish I was joking.

The good news is that readables and interactable objects are a lot more engaging this time around. There’s a deeper mystery that lies underneath finding out the main big bad. Part of that is finding out their other inspirations. Other than just letters found around the Murder Castle, players can find interview tapes with a serial killer more recent than H.H. Holmes himself. These instances transport you to cutscenes where flashy text and quasi-FMV imagery pop up onscreen. I found these to be entirely engaging, always excited when I found the next piece of the puzzle for this little side investigation.

The Devil in Me is also a little more open in its exploration. Now players can move about boxes, climb over obstacles, sidle around edges and jump gaps, all occurring outside of QTE cutscenes. These serve well as a means of putting the game more on par with other cinematic games of today. It also removes the prior dissonance that came with the fact that these feats could only be completed in cutscenes. Ultimately, it’s just to either find your way into a separate path or room. However, it can also result in finding a corner of a map where obol coins, a new collectable currency in-game that is used for purchasing models in the Special Features diorama shop. This is something I anticipate will be received with mixed reception, depending how much of that completionist part of your brain you may have.

The Dark Pictures Anthology: The Devil in Me is the best game in the series yet. Featuring a solid cast and dynamics to boot, I was well engaged in wanting to ensure everyone made it out of the horrific Murder Castle alive and was genuinely devastated when some didn’t. More opportunities are provided to explore and pick apart the environment than ever, often unearthing genuinely intriguing readables. Technical shortcomings once again rear their head a bit, showing stiff character animations from time to time and varied visual fidelity in some character models. Some of the equipment you’ll use to poke about the hell you’ve found yourself in is inconsequential but when they work they really work. At the end of the day, these flaws are forgivable. With obstructive shifting walls and deadly traps waiting around every corner so that you’re never really sure when you’re safe or not, The Devil in Me is a very alluring setting for horror fans.