Lustrous, shiny, irresistible loot. The siren’s call of the treasure chest has long enchanted gamers, to the point where the infamous mimic remains their accursed Achilles’ heel. Combining this obsession over plundered spoils with one of the most iconic and oldest RPG franchises has given birth to Dragon Quest Treasures, a celebration of all things gold and sparkly and another entry in the surprisingly rich oeuvre of high-profile Dragon Quest spin-offs. This fortune-focused title takes a gilded stab at a more action-packed experience than the core franchise, with a monster-collecting twist.

Dragon Quest Treasures acts as a prequel of sorts to Dragon Quest XI, expanding on the backstory of one of its protagonists. Erik, along with his sister Mia, are orphaned children in the service of loot-obsessed pirates. When a mysterious fae duo intervene in their lives and lead them to the powerful Dragon Daggers, they are thrust into a world of magic, prophecy, and sweet, sweet treasure. What follows is a quest to build up a gigantic hoard of riches, and in turn heal the ills of a world in turmoil.

The heart of this adventure is in Erik and Mia’s relentless hunt for treasure across the world. From your base, you’ll take one of the plucky siblings out into jungles, volcanoes, deserts, and tundras, relying on their Dragon Daggers to sense where hidden goodies may be hiding. Dangerous monsters populate the world, along with various allies providing quests to complete. Once you’ve found plenty of treasure, it needs to be taken back to your base to be valued, with story and gameplay progression tied to the total value of treasure accrued.

Dragon Quest Treasures diverges from the core series’ turn-based battles and allows you to control Erik or Mia in real time, attacking monsters and dodging their powerful attacks as needed. This has the wonderful effect of preventing combat encounters from interrupting the flow of your adventure. Being a prequel, you don’t have access to Erik’s overpowered twin dagger abilities from Dragon Quest XI, making direct melee combat fairly ineffective for the most part. You can attack with your Dragon Dagger when up close, but you won’t be doing significant damage outside of a lucky critical hit. Instead, you’re encouraged to focus on throwing a variety of “pellets” that mimic spell effects from the main series.

Offensive pellets deal damage of different types to enemies, allowing you to target their elemental weaknesses and end battles faster. Other pellets can inflict status effects on enemies (such as stun or poison), heal your monstrous companions, or make opposing monsters more likely to want to join your team upon defeat. Once you’ve found various recipes scattered across the world, you can buy or craft more powerful pellets with stronger effects. The pellet system ensures there are always tonnes of options available to you, and allows you to quickly switch between offensive and defensive roles as the situation requires.

This feeds into the main combat loop of Dragon Quest Treasures, which is focused around raising a party of friendly monsters to fight alongside Erik and Mia. There’s a chance that any defeated monster will want to join your team. If you can afford their hiring fee, you can recruit them as allies back at your base and bring them with you on your adventures. Monsters have attacks that damage enemies and buff your team, and they gain experience and level up when you find treasure or win fights. Party composition is key in the game’s tougher battles, where you’ll want to be subduing enemies with Erik and Mia’s powerful status pellets and allowing your allies to focus on dishing out damage and absorbing aggro.

You’ll rely on your monster pals outside of combat as well, using their unique traversal abilities to jump, glide, and dash around the world. They’ve each got personal tastes for different types of treasure, increasing the likelihood of finding specific treasures when their preferences match the environment you’re exploring. Any monsters not currently in your party can be sent out on missions to gather crafting materials and the occasional bonus treasure.

Unfortunately, the combat in Dragon Quest Treasures is let down by a few frustrations. The camera, while manually adjustable, requires an amount of babysitting that becomes a nuisance in the more difficult battles. The control scheme is also not the most intuitive, causing similar issues when things get heated. These small niggles combine with the decent amounts of grinding required to progress the story to make an experience that is best enjoyed in small doses. The necessity of returning to your base after a treasure-hunting session and the existence of rotating daily quests also encourages this bite-sized approach – in a previous life, Dragon Quest Treasures might have felt right at home on the Nintendo 3DS or the PlayStation Vita. 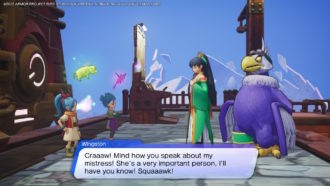 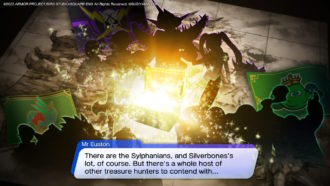 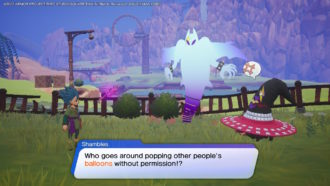 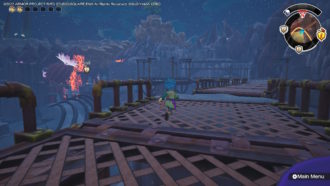 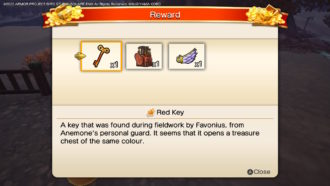 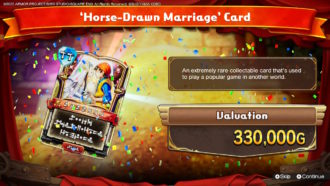 It would be remiss of me not to mention the star of the show: the glorious, lustrous, treasure. Dragon Quest Treasures makes each acquisition of loot feel delightfully decadent, trumpeting its nostalgic jingles and showering you with coins at every turn. The treasures themselves are varied, and pay heed to the rich history of Dragon Quest. You’ll be pilfering legendary weapons, bejewelled slime ornaments, and statues of the many vibrant characters that have played a role in the series’ history. It’s wonderfully nostalgic, even as a relative newcomer to the franchise. The game’s major story-driven treasures are just as desirable, sending you to the far-flung corners of the world with vague hints as to their resting place.

Not everything in Dragon Quest Treasures is comfort and smiles, however. When out adventuring, you can be raided by one of the many rival treasure-hunting gangs. They can attack your base and attempt to steal your prized possessions, or ambush you in the field directly with their own monstrous companions. These encounters are random and can happen at any time, meaning your precious hoard is never truly safe from being plundered. While these raids break up the pace of treasure-hunting in theory, they end up feeling like more of an unwelcome distraction from the core adventure.

What’s exceptional about Dragon Quest Treasures is its utterly charming presentation. Opting for a slightly more simplified look than its core series sibling, the visuals are colourful, vibrant, and clean. Monsters are absolutely bursting with personality and stand out against the thematic environments, which serve as lush playgrounds for treasure hunting. The world’s design feels almost like a whimsical homage to the Xenoblade series, spiriting you across biomes sitting on the bodies of long-dead titanic creatures. Each game element, from the menus to the cute (if incredibly repetitive) catchphrases spouted by your monster pals, is steeped in a cartoonish, storybook sense of joy. Dragon Quest Treasures’ world is delightful to escape into – even if its less-polished elements make it better appreciated in short bursts. 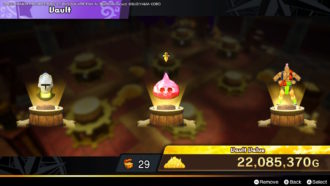 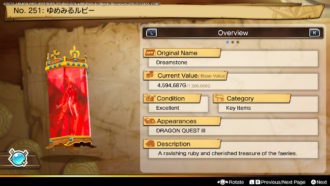 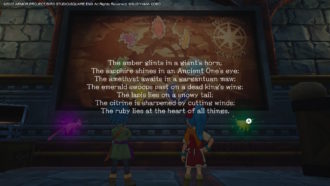 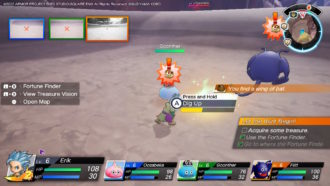 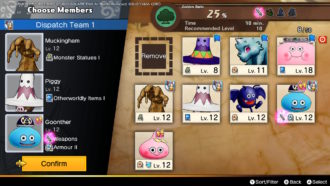 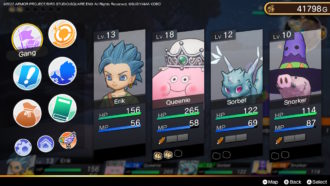 A whimsical romp across a colourful world of magic and monsters, Dragon Quest Treasures is a comforting and nostalgia-filled addition to the series. From its recruitable monsters that ooze personality to its collectible trophies, this title is full of charm and is an absolute joy to play – in short sessions. Some frustrating camera issues and a repetitive gameplay loop do get stale when playing for longer periods. Dragon Quest Treasures is best enjoyed in little bites, each of which is sure to bring a smile to your face.