Dragon Quest Builders 2 sets itself up as  a kind of alternate universe sequel to Dragon Quest II. The Children of Hargon, a cult which worships the villain of Dragon Quest II, has taken over the world and banned the act of building. In a premise similar to Footloose, you must restore the spirit of creation by inspiring the people around you to build again. It is kind of silly, but the lighthearted presentation and fun characters got me on board right away. 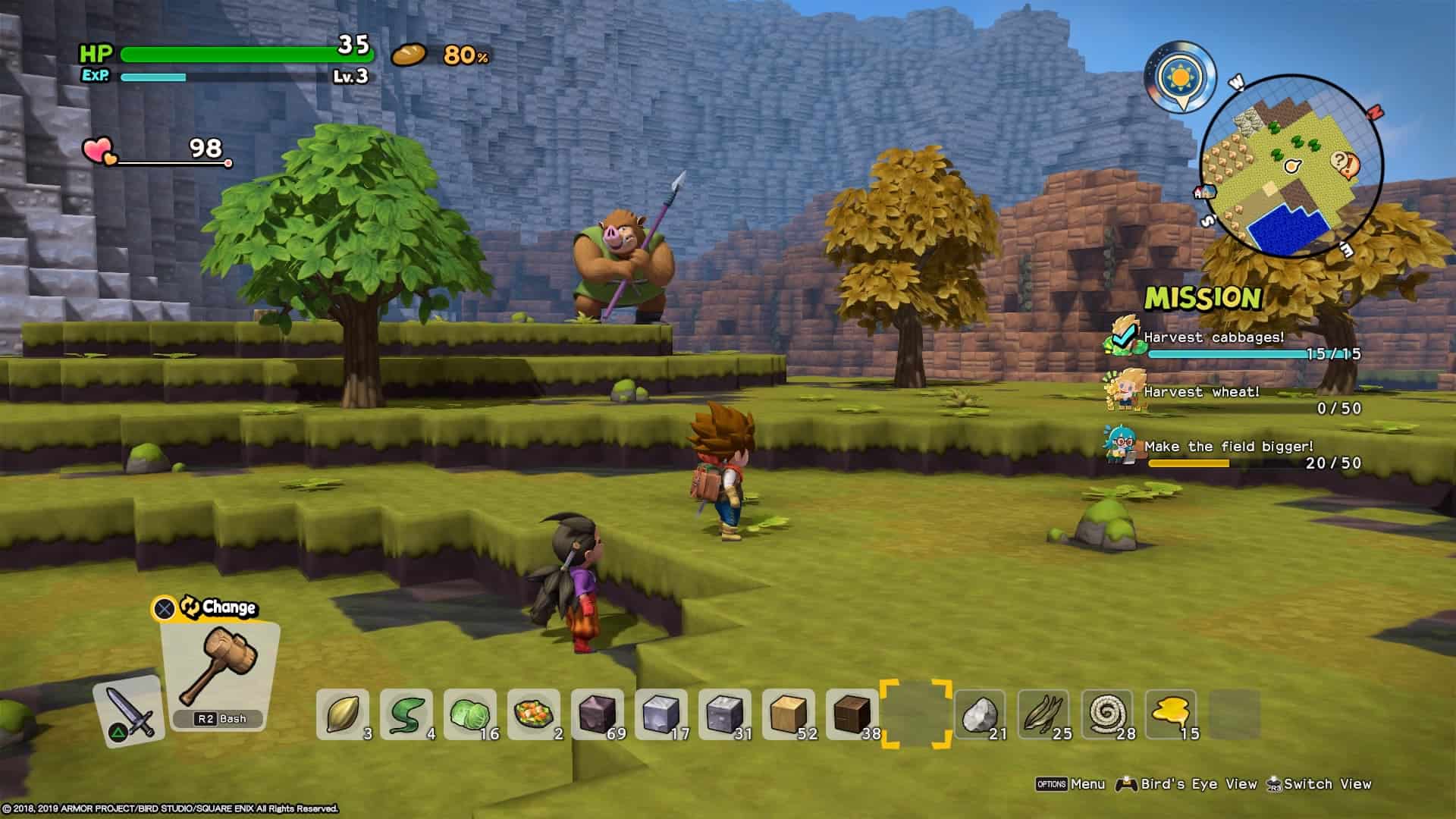 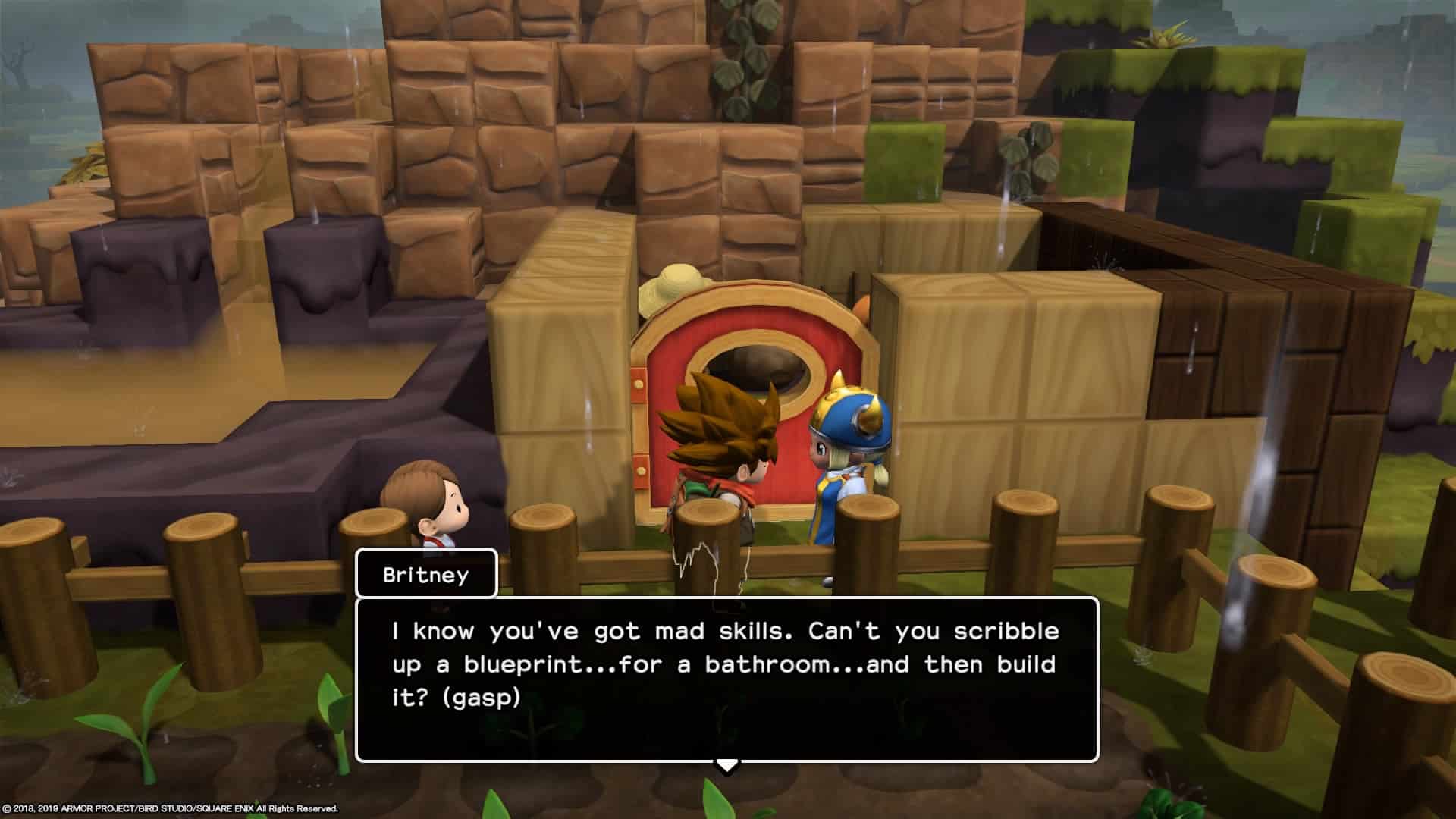 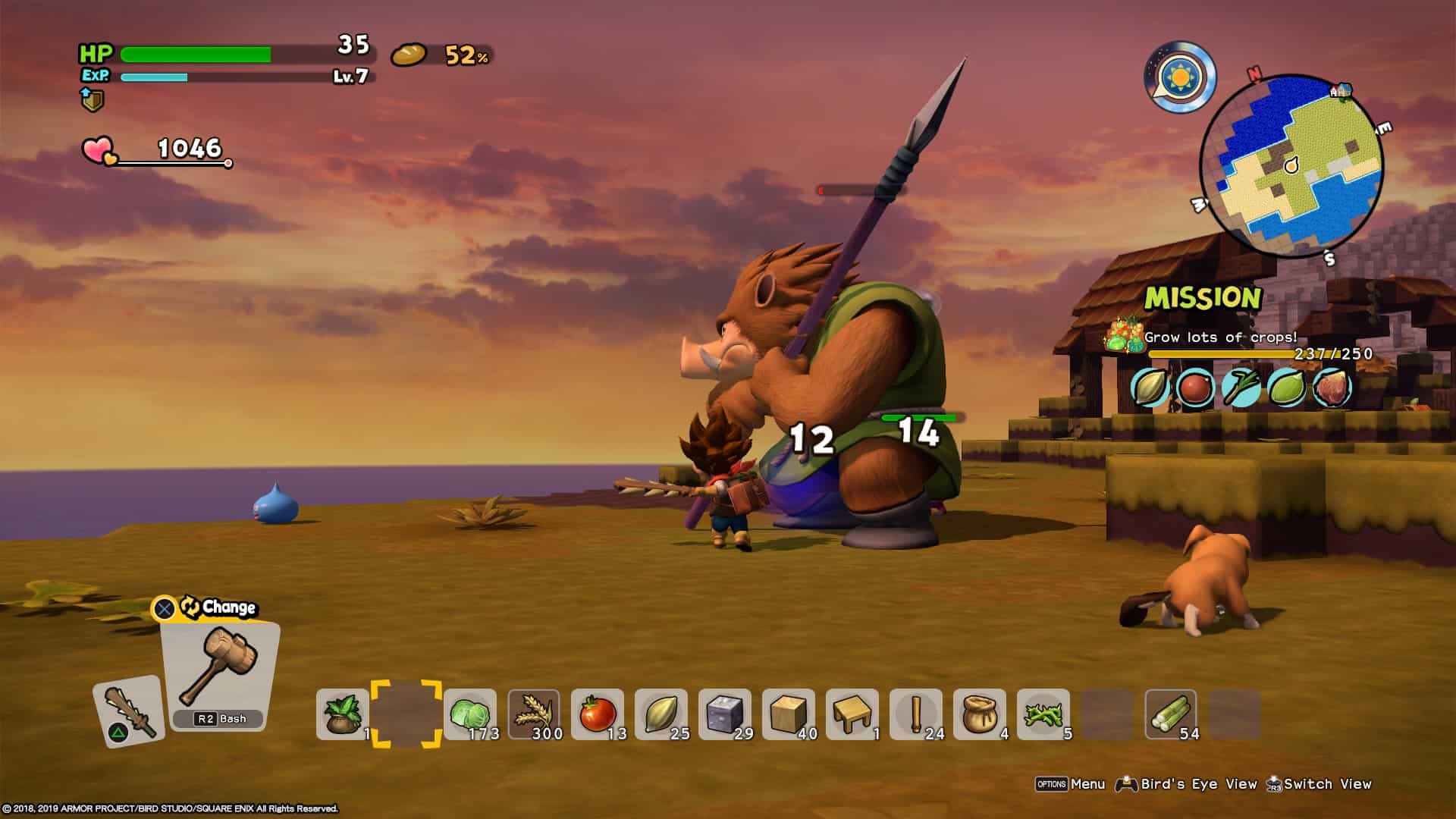 Whilst the blocky textures and emphasis on crafting might evoke Minecraft, Dragon Quest Builders 2 is not as simple as Minecraft with a Dragon Quest skin. It is closer in spirit to town management games like Stardew Valley or My Time At Portia, where you progress by fulfilling crafting requests from villagers. Items can only be crafted from recipes that you receive from villagers or by leveling up.

As such, it trades the openness and experimentation of crafting-survival games for a more structured experience. I personally appreciated the more quest-based nature of Dragon Quest Builders 2, but players looking for more of a sandbox may be more disappointed. You do unlock your own personal island later in the story, where you can build to your heart’s content. However, the bulk of your time will be spent making what NPCs want you to make, rather than truly playing around with the mechanics.

“As usual for the series, the localisation is top notch.”

In terms of aesthetics, Dragon Quest Builders 2 maintains all the charms of the Dragon Quest series. The characters and monsters are bright and colourful, and animate adorably.

As usual for the series, the localisation is top notch. NPC dialogue is brimming with localised accents, alliteration and puns. I do kind of wish there was voice acting, but its absence isn’t a deal breaker.

The bulk of your time will be spent venturing out from your base and finding materials in the wilderness. Dragon Quest Builders 2 brings several quality-of-life improvements which make this process more enjoyable. For instance, storage space has been greatly increased, reducing the annoyance of running out of room. Blocks can be moved around  by hand, making fixing a misplaced block less of a hassle. You also later unlock new mobility options, like a Breath of the Wild-style para-glider and a short-ranged air dash. Finally, the biggest godsend has to be that weapons and armour no longer break after use. You can whack enemies with your sword as much as you want without needing to build another one.

The annoying micromanagement of building big structures from blueprints and farming is also reduced. After a while, your villagers will take care of routine tasks like those for you, which lets you focus on the more enjoyable creative aspects rather than the dull busywork. The game makes you work for your fun though; many of the time-saving features are only introduced several hours into the story mode. That kind of slow burn will probably be familiar to fans of the mainline Dragon Quest series, but might make this game difficult to approach for anyone looking for quick gratification. 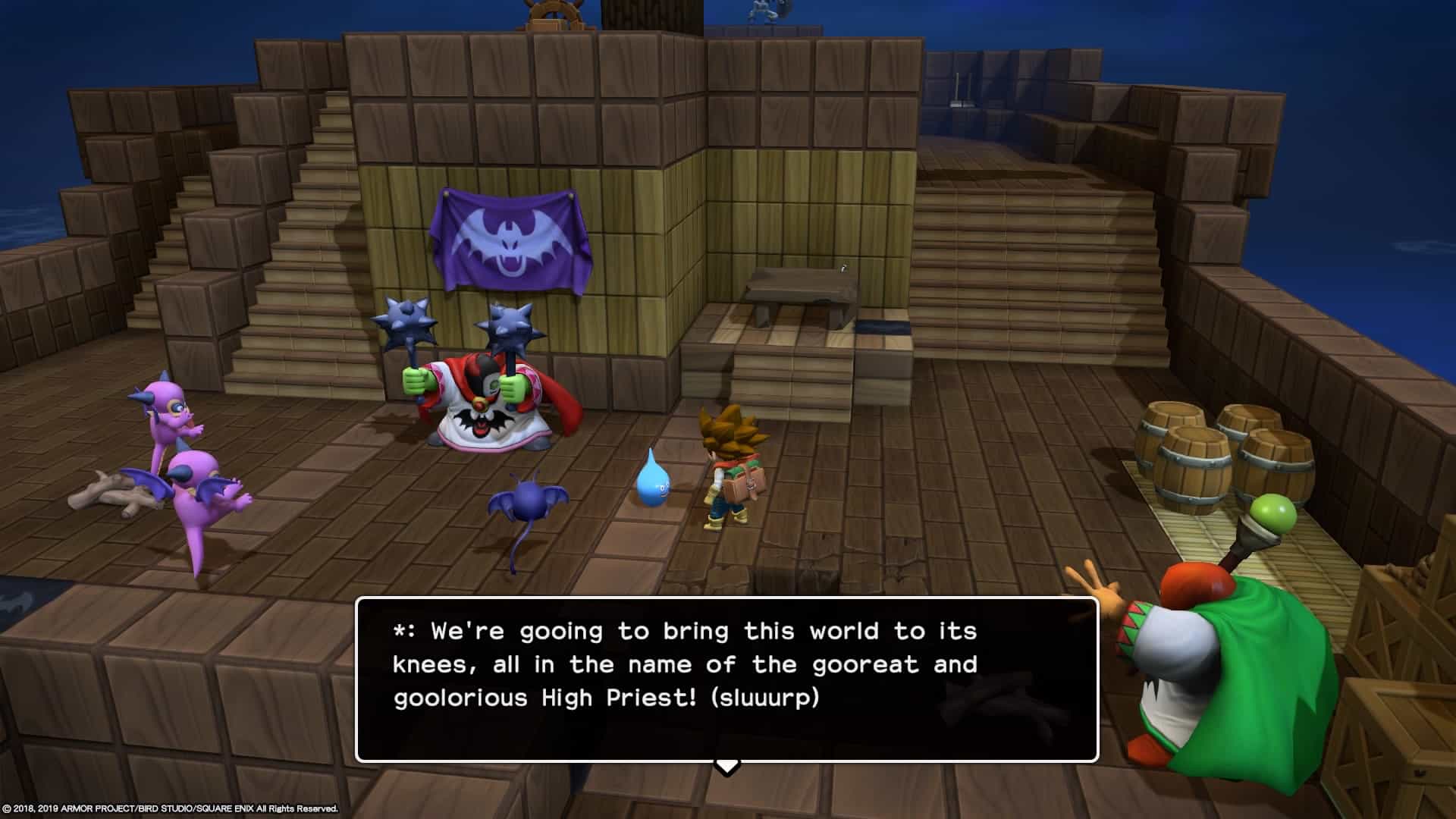 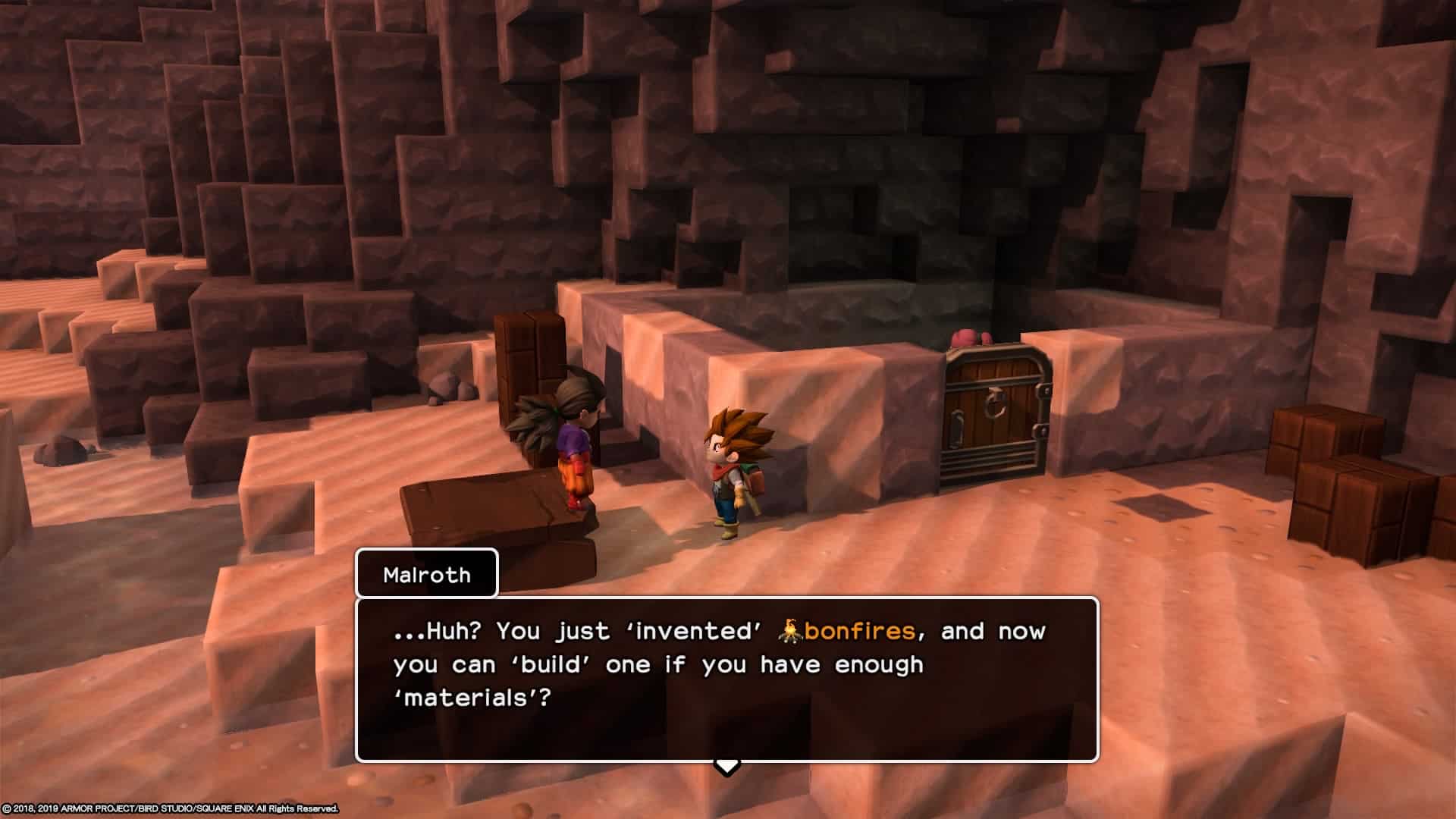 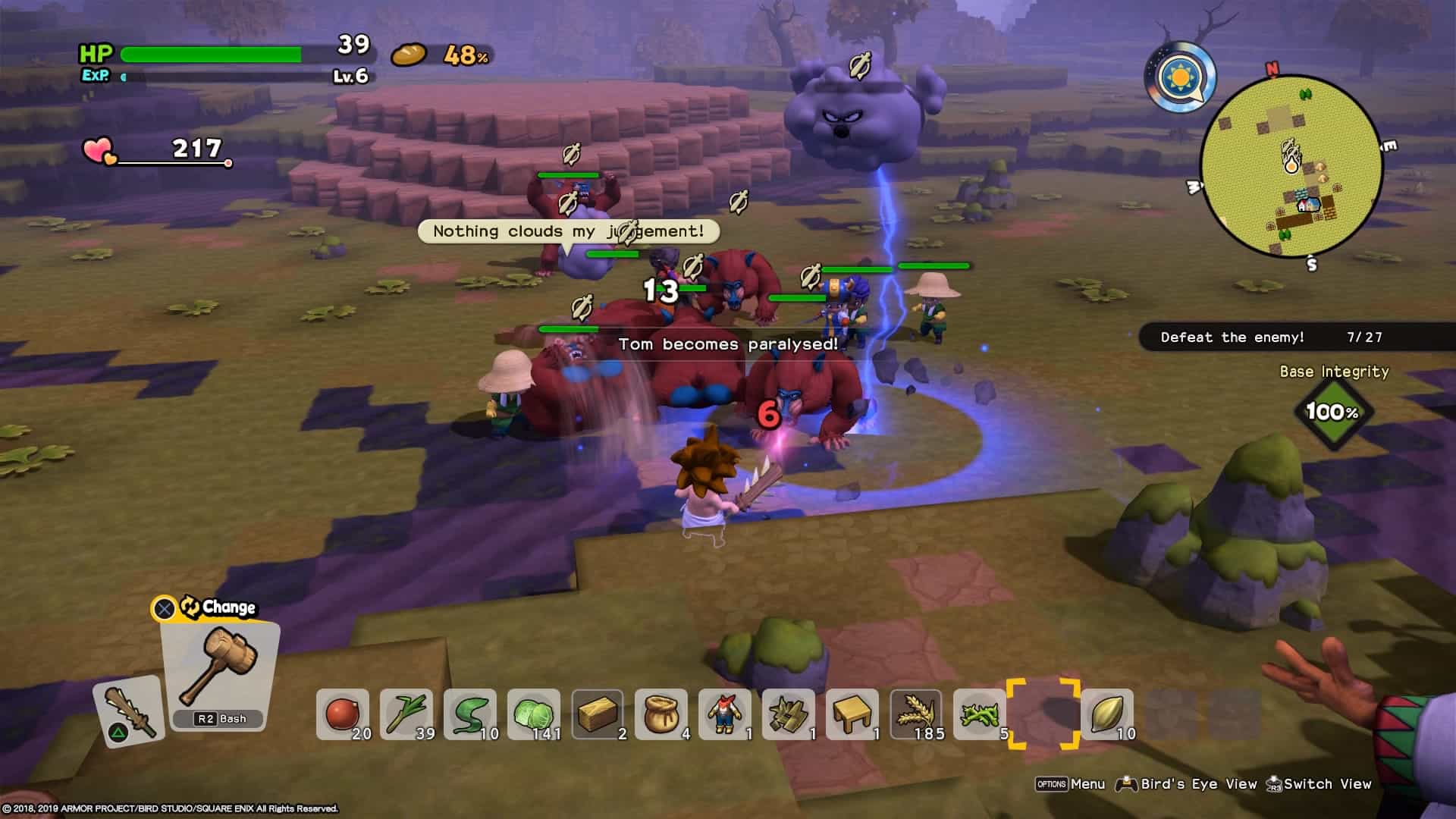 However, not everything about Dragon Quest Builders 2’s gameplay loop is satisfying. On both platforms, one button is used for too many things, from talking to NPCs, equipping the paraglider and switching tools, whilst the left shoulder buttons don’t do much.  It is an inefficient control scheme that led to me accidentally talking to my party members when I just wanted to get out my hammer.

In addition, the combat is extremely basic. It doesn’t expand much beyond mashing the attack button and retreating when they telegraph their attacks, with no dodge, block or strafe option. There are some special attacks, but they take so long to charge that button mashing is more effective. The amount of damage the player deals seems to be reduced as well, to encourage the player to let NPC party members help out. Overall, the combat felt tedious and annoying compared to the more enjoyable exploration and construction.

One of the other main additions to Dragon Quest Builders 2 is multiplayer. Players can take screenshots, and share them on noticeboards and loading screens. Furthermore, players can invite friends to their private island and show off their creations.

It is a fun little feature to encourage players to make the most of the game’s expansive creation tools. However,the multiplayer features aren’t totally integrated into the game; the main story mode islands are unfortunately single player only.

Dragon Quest Builders 2 feels like a better realisation of the first game’s premise. The construction and exploration are more fun and expansive. The story, whilst  still silly, is a bit deeper.  The world is bigger and more varied. The combat…well, okay, the combat still isn’t very good. However, it all combines into a strong package that is appealing even if you haven’t played the original. Dragon Quest Builders 2 is a charming and enjoyable open-world creation game that is enjoyable for RPG and crafting fans alike.