The indie horror scene is where some of the utmost passionate work comes out of the gaming space. When titles Silent Hill or Resident Evil still remain big genre names to this day, much of the lower budget work can feel like an attempt to stand on the shoulder of giants. Mirror Forge, developed by MystiveDev and published by DreadXP, is just one of those attempts. Featuring psychological and visual elements highly inspired by Silent Hill 3 in particular, the game gives its damnedest. Sadly that’s not enough, with overambition and stock-standard horror storytelling preventing the experience from reaching such heights.

Mirror Forge follows a character named Thomas on an interdimensional journey, searching for their missing wife. This travelling takes place through mirrors, where each new dimension will have horrifying monsters to overcome along with puzzles and various oddities. Confusing visions and nightmarish dream sequences haunt the protagonist and only the end sees answers. Can you survive and unravel the mystery that weaves itself between dimensions? Time will tell.

What’s immediately clear with Mirror Forge is that it is a very earnest game for the psychological horror genre. Visions and nightmare sequences will periodically come to haunt Thomas. These are often sections that have you exploring the hallways of Thomas’ home. Readables and echoes of his partner’s voice support these moments, indicating some of what their life was like prior to her disappearance. It’s here, heavy-handedly so, that you begin to see some of the fabled Silent Hill-Esque manifestations of themes such as guilt rear their head.

Those familiar feelings continue in the environments you’ll explore. There’s an early visit to an abandoned residential town and incredibly industrial settings where flesh and membrane combine with brick and machinery. These spots actually did a great job of keeping me on my toes. Harsh, pervasive noises of machinery being operated and the visual of eyes watching my every step on walls of flesh left me nervously distracted. So much so that I’d occasionally forget about the monster I recently had pursuing me, now once again popping up to scare me. It’s in moments like these that Mirror Forge did a good job of making me feel defenceless and frightened.

However, players aren’t entirely defenceless. Mirror Forge dabbles with cultic and Mesopotamia elements. Players will often be transported to temples that play tango with eldritch imagery. As such, you’ll get a device known as the Seal of Nur. This seal is a runic object that can be used to discover elements, those not of the dimension Thomas has currently found himself in. Using it at any time will briefly freeze some of the monsters in place, leaving more breathing room. They too can discover symbols on walls (handy in puzzle solving) and, when near specific spiritual wisps, unearth more storytelling by introducing ghostly silhouettes of the past that will provide more insight into the world.

I’m always thankful when puzzles in horror games aren’t too intricate and don’t contain obstacle that slows you down, taking you out of the experience entirely. The game delivers on that front, but I couldn’t help but at times wish the Seal of Nur and its potential was utilised a little more. Some stretches have you not using the device for longer than I’d like, instead offering some somewhat janky platforming sections as you climb facilities and dart through vents. Not exactly the alternative I was after.

Good bones in eerie exploration, dimension-hopping, and using strange devices, but that’s about where my joy ended with Mirror Forge. The game quickly falls into trappings that many indie horror games do: overambition. It’s all good and well to base your horror game on some of the giants in the genre. Though that wall and illusion are quickly torn down when the budget and technical chops aren’t necessarily there. Character models, human or otherwise are somewhat rough. Chills and tension come from your pursuers, but that will quickly fade away when you get a close look at one, often being a little funky looking or uninspired in design. 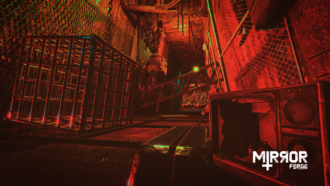 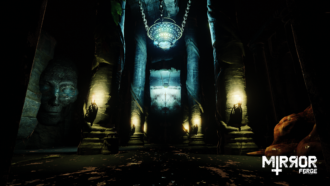 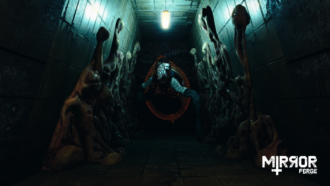 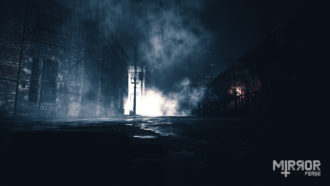 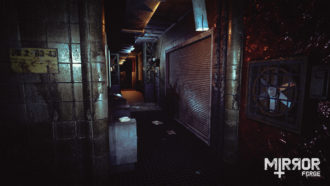 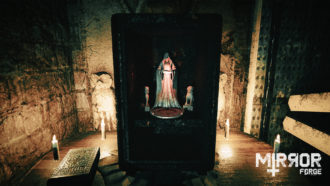 The storytelling is also uninspired. The beats of what went on are mostly what you’d expect, even when the game takes a further plunge into the weird. A male horror protagonist goes searching for his missing wife, finds out some things he maybe shouldn’t, and entertains the idea of cults. You know where this is going. In the five or so hours it took me to beat the game, nothing aside from some of the imagery truly wowed me. I felt like I was going through the motions until I rolled credits.

I’m never happy when I don’t enjoy an indie horror game. Especially considering just how much of a good stab MystiveDev gave. Though the fact of the matter is that with its delivery and disconnect between ambition and limitations, Mirror Forge ends up being a pretty middling experience. I’ve even played better Dread XP-published games this year in The Mortuary Assistant, a great title that well and truly achieved what it set out to do. Mirror Forge is not that and is somewhat generic, something that isn’t the type of work I want to see from such a publishing studio.

Try as Mirror Forge might, it never reaches the ambition it establishes in the opening moments. Generic and stock-standard horror storytelling provides beats you’ve mostly seen before, leaving players going through the motions. Uninspired and funky-looking characters and monster designs rip away the mystique the game offers. There are some eerie environments, with pulsating fleshy walls amid harsh industrial complexes that feel incredibly Silent Hill. That should be praised as such. However, at the end of the day, Mirror Forge is an unfortunate case of missed potential and raising scope too high. Neither remarkable nor an offensive entry to the horror genre, you might as well let this one pass you by.