One Piece: Odyssey Review – A pirate’s life for me

One Piece: Odyssey is something of an occasion. Having just celebrated the manga’s 25th anniversary some six months ago, a companion game has been released to commemorate the milestone. Featuring dozens of hours, excellent turn-based RPG gameplay, and plenty of anime shenanigans to get into, it’s one of the best adaptations yet.

One Piece: Odyssey is an entirely standalone story that sees protagonist Monkey D. Luffy (otherwise known as Straw Hat Luffy) once more partying up with his pirate gang, the Straw Hat Pirates. A dazzling beam of light echoes from the middle of the ocean, promising the potential of treasure for the gold-hungry crew, and it’s in investigating this anomaly that the crew becomes shipwrecked, losing their powers. Landing upon the island of Waford, the gang thankfully ends up at the source of the light; though it’s an uphill battle ahead for the Straw Hats in the fight to find meaning and regain abilities.

Joining the gang is new characters Adio and Lim. Lim in particular comes in handy and aids in the groups’ means of travel, as she contains the ability to access and use the groups’ memories in order to transport them to known One Piece locations. These locations become important for a number of reasons as the completion of an area and defeat of a boss (often one of the Seven Warlords of the Sea) sees the gang return to Waford with some abilities restored. These abilities can also be fine-tuned after completing one of the island’s four temple dungeons. This chapter-by-chapter loop of visiting a familiar place, conquering it, and then returning for some good old-fashioned puzzle-solving is thoroughly engaging. Though that goes deeper when, like many anime-to-game adaptations, you factor in the fan service.

“Each location is well realised, providing vibrancy, colour, or even grit where needed…”

Throughout One Piece: Odyssey, visits will be filled with nostalgia and endearment to fans. Visiting the seaside regal town of Water 7, where industrial shipyards and shopping districts collide, feels like a theme park trip as you travel down the canals by gondola. The high-intensity battle of the clashing of iron and steel in Marineford’s Summit War recaptures such stakes well. Each location is well realised, providing vibrancy, colour, or even grit where needed to translate from their anime and manga counterparts.

Most enticing to fans will be the Final Fantasy VII Remake approach to storytelling. Each location you visit is a memory, and you’re now exploring these worlds under a new context, meaning historic events can change entirely. This opens up the door to a number of new possibilities. Characters that otherwise wouldn’t have met yet can now meet. Others can be in places they shouldn’t be. Full disclosure, I’ve never seen a single episode of One Piece, nor read any of the manga. Still, being somewhat familiar with the franchise from osmosis alone, this did at times feel quite impactful. The themes and ideas that come with fighting against history, wanting so desperately to change it for the good, are evergreen.

However, I wish it went in on this idea a little more. Serving as a standalone adventure that’s considered not canon, One Piece: Odyssey shies away a little by not really changing course drastically. Longtime fans will undoubtedly pick up on clever intricacies, though nothing is shifted cataclysmically. Why not go all in if it’s not going to impact the greater universe anyway?

The primary One Piece cast is present in Odyssey, making up your party DNA of Luffy, Sanji, Usopp, Robin, Nami, Zoro, and Chopper. More characters are picked up along the way and I grew to love each in their own right. Luffy is a hell of a protagonist, even if he’s just a young lad that loves to eat and look out for his friends. Through no fault of the game, as it is undeniably true to the source material, series creator Eiichiro Oda’s female character design remains frustrating to this day. For instance, Nami is an adorable yet strong-willed individual that’s the most money hungry of the crew. Yet she’s unfortunately designed in a painfully unrealistic body type, with an impossibly thin waist, large breasts, and dressed only in a bikini top and jeans. Robin, the other woman of the crew, similarly has excellent traits and characteristics but leaves much to be desired on the design front. Such is the way of life being a woman in a Shonen.

Wrapping up my thirty or so hours with One Piece: Odyssey, this cast only grew on me more and began to feel like a second family. I seem to understand at least a good amount of the characters now and see why they’re so beloved. If that’s a testament to anything, it’s to how well the game introduces newcomers to the greater world of One Piece. Yes, this makes for a hell of a bouncing-off point for the franchise.

One Piece: Odyssey also just makes for a joyous RPG to burn through. Environments are quasi-open-world with interconnecting areas. Your adventure is very similar to traditional turn-based RPGs but with some good modern sensibilities. Enemies only appear in scripted narrative moments or in the overworld, meaning you can avoid many fights as often as you like. The game is considerably generous in the experience and the berries (the in-game currency) that it doles out to you. Auto-battling with the combination of adding to the battle speed makes life easier in the slower moments that ask for more grinding. Barring important and scripted moments, you can also flee from any fight. All of this makes for a relatively smooth RPG experience.

However, there are somewhat minor instances where that experience lets up. Difficulty options are not present in-game, meaning if you’re in it just for the story, you’re a bit out of luck. There is no auto-saving and save points can occasionally be sparse. This combination in particular has caused me trouble right at Odyssey’s closing moments where I’ve hit a final battle that is truly tough and I believe myself to be under-levelled. Problem is, with how my saves worked out, I can’t go back to an earlier moment to grind it out. So for now I’m stuck with a problem in what is an otherwise great game, waiting for one last moment of triumph. Here’s hoping it comes.

The turn-based RPG genre has been so well-treaded these days that it’s not often you see innovation. I didn’t expect to see that in One Piece: Odyssey of all things, yet here we are. In any given battle, four party members make up the fight. Fights are made up of several ‘areas’ on the plain of the battlefield, meaning some can battle it out on one end while others are on another. This takes a little to wrap your head around, as it’s not represented all that visually in the environment, and more in the battle HUD. That is to say, if one of your companions is in the same spot on the battle HUD’s timeline, they are in the same area. Entirely brain-wrinkling at first, though once mastered, I found this mechanic deeply rewarding.

Before long I was pulling fights off like a pro, pulling away those weak to a certain enemy’s type in one area to another where they’d have the advantage. Combine this with the fact you can swap one of your party members out in a turn (provided they’ve not yet done an action) with those in your reserves, and you’ll feel well-equipped. Though not perfect and a mechanic that feels in its early days with refinement to come, it’s an excellent innovation.

The last part of your strategy will come with the rock, paper, scissors style of player and enemy types. These are made up of Speed, Power, and Technique. Rather than individual attacks being the main focus for where these types fall, instead it’s the characters themselves who take on the typing. Luffy is a Power type, Usopp a Speed, Zoro a Technique, and so on. I like this touch because it requires less messing about and confusion. 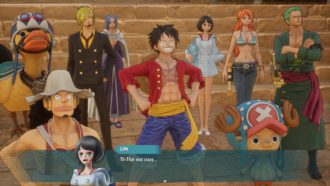 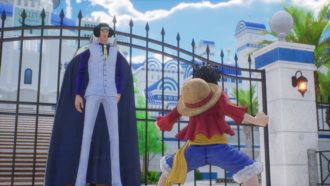 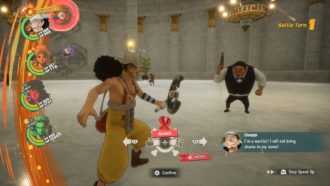 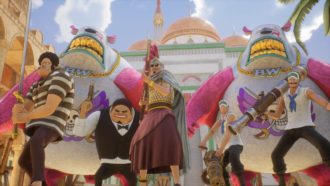 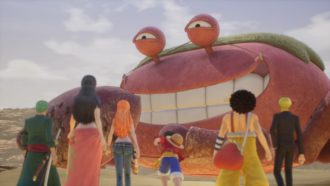 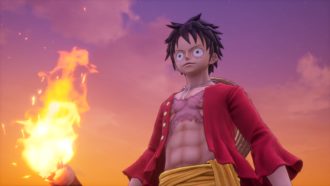 The battles spice up when random optional feats will be asked of you such as defeating an enemy in under x number of turns. These are well worth paying attention to because they’ll often provide bonus EXP and berries tenfold to what you were already about to earn from the fight. Other than that, One Piece: Odyssey makes for a pretty smooth-sailing JRPG. Levelling up does all the numbers work for you barring those that can be boosted by adding accessories and gear to slots in menus. There are team bond attacks (abilities that utilise more than one character at once for devastating damage) that can be unlocked by completing side quests in the overworld where a smaller subsection of the larger party will be separated together.

What’s left then is to bask in how incredibly anime and over the top the experience can be. Riotous cutscenes play out every time a powerful attack is made, whether that’s Luffy stretching their legs out to great lengths for a powerful kick, or little reindeer Chopper growing in size to become incredibly jacked up, letting out a barrage of jabs. With this the game got many joyous laughs, with me sitting back and letting the chaos unfold.

Other than that, plenty of adventuring awaits you in One Piece: Odyssey. Side quests and bounty hunting are similarly a little fetch-quest in nature, but it’s a non-issue if it means spending more time in the game’s world. Each character has its own ability to be used in exploration and to remain more distinct. Luffy’s long arms can be used as a grappling hook, reaching otherwise inaccessible areas and items, while the later obtained party member Franky can be used to quite literally build bridges. This opens the door for more secrets and valuable items to discover.

With dungeons that are filled with engaging puzzles and mysteries, familiar story beats under a new lens, and excellent turn-based combat, One Piece: Odyssey is one for the books. It is, with some needed small improvements here or there, the blueprint of how anime games should be. In a niche with historically good and not-so-good entries, Odyssey proves the One Piece future is looking bright.

Fans are in good hands with One Piece: Odyssey. In fact, more anime games should be following in strides made here. On offer is a wonderful adventure that feels like a theme park visit to the series lands, old and new. Characters shine and bounce off each other well both in and out of cutscenes as colourfully as they should. Some areas need better story pacing and quality of life improvements such as better checkpointing and save states, and going more all-in on different story timelines would’ve also gone a long way. And it’s testing to see manga artist Eiichiro Oda’s troublesome female character design. However, it’s a blast of an RPG. Flaws are more than made up for in a thoroughly enjoyable anime affair along with an unexpected and very welcome spin on the known turn-based RPG formula. Smooth sailing lies ahead with One Piece: Odyssey.