Comedy in video games is tough. More often than not, incorporating the style into the intricacies that come with making a game can go one of two ways. They’re either going for the controversial humour akin to games like Duke Nukem or they’re the zany and charming entries like last year’s Bugsnax. Floor Plan 2, my latest VR Corner foray, teeters towards the latter and is absolutely the most I’ve laughed with and been amused by a game so far in 2021. Even with some classic puzzle game frustrations, this is a VR title ripe with charm.

Floor Plan 2 situates players in a corporation dedicated to puzzle solving. The company, named Puzzl, has hired you in order to help solve such puzzles, which you’ll find throughout the multiple floors and wings of the corporate building. Enter one of the two elevators, step off at any floor and it’ll be, curiously, vastly different from the one prior. Players can find themselves in a museum, a bathroom that can shift angles and even a spacecraft fit with a tractor beam that controls the trajectory of the moon.

These varying environments are avidly engaging and do well in creating wonder for just what’s going on in this untraditional company. As the game unfolds, you’ll find yourself in increasingly zany situations. Though one thing that’s a delight is that there’s never really a revealed secret behind this corporation. It’s just joyously weird.

Where Floor Plan 2 will lose some players is its puzzle design and solutions. Both wings of the building have you working towards obtaining a key item. Players then have to explore, use tidbits from various floors of the building and interact with the world around them in order to eventually gather the prime item. The multi-layered solution towards reaching this goal is clever. Some occasions will have you trying to work out how to awake a sleeping mummy in the museum or power up the aforementioned space station. When you see this achieved, it’s undeniable how smart the resolutions can be. Problem is, it has that early point-and-click puzzle solutions vibe where a lot of the time it feels almost inconceivable how you’re meant to achieve each next step. Much like classics such as Myst, expect yourself to likely be living out of a walkthrough guide during your playtime.

Putting aside the undoubted frustration that comes with solving puzzles, Floor Plan 2 is one of the more satisfying to control games I’ve experienced as part of VR Corner. Floors in the building are never all that big nor a maze to explore. They just feature simple points you can teleport to. The puzzles you face often use clever thinking in regards to considering both your horizontal and vertical axis. Turning levers, fiddling about with items and navigating around the map all feel as they should. Some puzzles also often have you moving around and reaching a fair bit. Thankfully, the game offers a setting that allows players to be larger in the environment, so things are closer and aren’t as backbreaking of a stretch. This was considerably helpful while playing the game in more constrained environments and is the first of its kind I’ve witnessed. How delightful.

Really, there’s just so much novelty in the world Floor Plan 2 is offering. The tutorial for the game has you sitting at a desk, facing simpler and amusing puzzles. Customers would be wheeled in on an on-rails desk chair where they come to me with their problems they need solving.

One customer came to me with a toy puzzle in hand with buttons on it. She reports others have witnessed the toy lighting up but she has seen no such proof. Observe her and you’ll notice she’s wearing sunglasses which prevented witnessing this. Take them off and the problem’s solved and she’s on her merry way. Wanting to keep these sunnies for later, I look down to my waist where there lies a very stretchy bumbag that serves as my inventory. I pull it out as far as it can go and slot the specs in. Later on, a fugitive comes in, looking for a disguise. Why my sir, I have just the glasses for you!

The game is absolutely aplenty with novel puzzles and object interactions all throughout the game. I just wish some of the resolutions weren’t as obtuse and the provided hint function was a little more helpful. 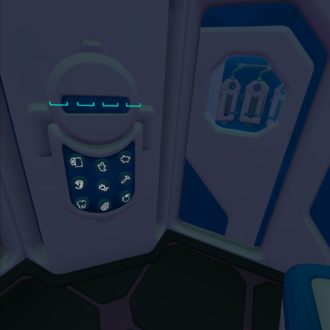 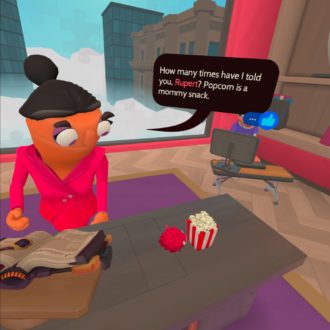 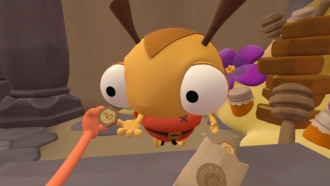 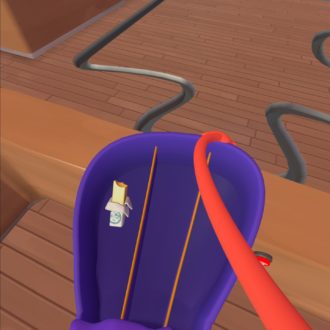 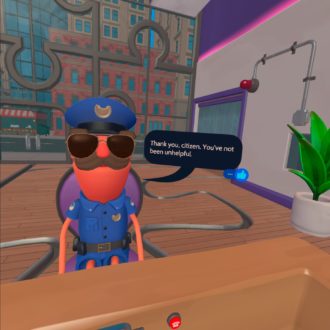 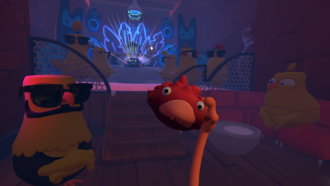 It’s no coincidence that I brought up Young Horse’s Bugsnax earlier. Both the characters and world design of Floor Plan 2 feel as colourful and creative as the beloved studio. Of course, it achieves it without feeling all that derivative and instead a comfortable alternative option of a charming comedic game. Dialogue for the game is very smart, complete with relevant accompanying visual cues often occurring in the background to help bolster the bit. Characters are cute and cartoony, with a puppet look to them. Speak with these characters and as they’re delivering the jokes it’s communicated in an indecipherable language that sounds close to Vocaloid technology. Look down at your hands and you’ll see they’re red with a stringy, spaghetti-like movement to them.

No joke, Floor Plans 2 is one of those games I’ve played for VR Corner where words don’t do all its strengths justice. From witnessing bafflingly clever writing to wondering what’s going on in the game’s world – be it a party of baby chicks at a club or the queen bee of a beehive – there’s plenty to love, adore and marvel in.

If you can cope with some of the wear and tear that comes with playing a VR puzzle game with at times obtuse solutions, Floor Plan 2 is still worth your time. Where the first game is a briefer, less than one hour experience, this sequel offers a longer and more fully-fledged package. With charming design and planned future content updates, there’s nothing stopping the game from going up, up, up!

Floor Plan 2 is available now for Oculus Quest – check it out.