We were recently lucky enough to join an Arkane hands-off preview of Deathloop to check out the game, see it in action, and question the super talented development team behind the upcoming stylish shooter. Alongside other media, Checkpoint was able to watch some brand new gameplay with a rather detailed presentation of the game, including its opening moments. Dinga Bakaba (Game Director) and Sébastien Mitton (Art Director) from Arkane joined us live to answer our questions and it’s honestly given me a much better understanding of this release.

Deathloop is an insanely stylish upcoming release from the development studio behind Dishonored. Arkane Studios have clearly leveraged their past and have made a game that feels unashamedly Arkane, with characters and a world that packs so much personality into a first-person shooter. Disohonored fans will also feel instantly familiar with many of the powers available to use during the game, with abilities helping throughout combat as well as traversal through a tightly packed and highly detailed world.

The big point of difference for Deathloop is the game’s premise. You play as Colt, a man stuck in an infinite loop that sees him starting the day anew each and every time he meets his likely demise. He’s stuck on an island where a set of 8 “Visionaries” alongside their goons are trying to kill him, and he can only break the loop if he’s able to kill them all without dying himself. We’ve been pretty excited about this game ever since we first saw it back at E3 2019. The game’s most recent delay has it releasing in September of this year, and honestly I feel as though I’m counting down the days at this point.

The hands-off preview gave us a better understanding of the game. The stylistic choices of this world go deeper than expected, with Colt interacting with floating words in the air as he pieces together the surrealist world he’s occupying. The 1960’s inspiration is obvious with 1967 film Point Blank being name-dropped as a specific influence. A fantastical and science-fiction world awaits as Colt uncovers bonkers characters and a colourful environment to explore.

Colt is a natural killer, surprising even himself at the beginning of the game with his ability to stealthily and efficiently dispose of foes. Everybody around him has been instructed to kill him on sight, so the game becomes one of heavy subterfuge with moments of all-out combat when things get dicey. Abilities are learned and weapons acquired that will help Colt succeed against all odds, but of course, a time loop exists that will remove some of Colt’s progress each time. This is where the game gets interesting and unfortunately somewhat hard to explain.

Time of day plays a big role in Deathloop because enemies will be in different spots and doing different things depending on that time. It’s like an episode of Groundhog Day playing out in front of your eyes. This also means that you can begin to learn enemy patterns and start relying on certain known factors that will happen each and every loop. Killing any of the 8 Visionaries is way more of a puzzle than I ever previously anticipated, with the game’s time loop mechanic actually being used as an intel-gathering technique. Colt will learn key information from one loop to the next by reading notes, eavesdropping on conversations, and more. It’s his job to figure out where and when the best time is to take out one of the Visionaries and then to enact that plan to perfection. Finding that “solution” is actually a huge part of the gameplay loop.

Game Director Dinga Bakaba went on to further emphasize the investigative murder puzzle aspect of the game. He tells us to “start thinking with loops”. It’s a mystery with a solution that requires players to “master the island” through repetition, familiarity, learning, expertise, and mastery. “It’s one of the reasons we wanted to explore this time loop construct.”

Deathloop fascinates me in this regard and I can’t help but get excited over the possibility of that investigative time loop. It offers so much exciting potential. It was actually a question asked to the devs: Why haven’t we seen more time loop games before, surely they seem like such an obvious and fun concept? The answer? Because “it’s f*cking difficult”. 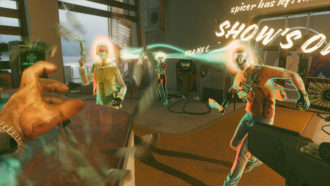 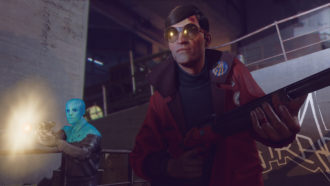 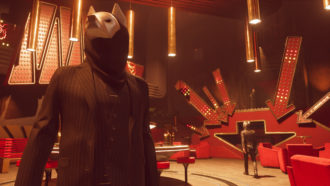 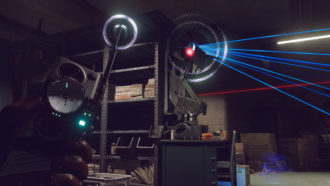 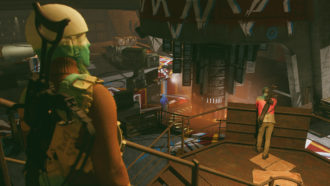 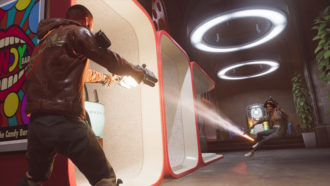 The game’s day cycle is an interesting one. Players won’t be under a time limit to complete their objectives, gather intel, and assassinate their target. They’ll choose to spawn in to a certain area at a certain time of day and time will only move forward (morning > noon > afternoon > evening) once the player decides to leave the area. This means players can figure out when they’re able to take out a Visionary and knock them off one at a time. Unlike the recent time looping release Returnal, Deathloop will also offer the ability to save, although only during the intermission periods. Once you enter an area, you can’t save until you leave that area.

The game will also allow you to carry across some progress so that it doesn’t feel as though you’re never progressing. A resource called Residium can be accumulated and spent to maintain equipment between runs. And, of course, if you learn a juicy bit of information such as the code to unlock a door, you’ll retain that info to help you out the next time.

Arkane also shared with us further insight into the type of game this is. They don’t really see Deathloop as a traditional blockbuster release, instead drawing parallels to indie-developed games that are more experimental and risky. “It’s quite a unique game… Even though I’m a AAA dev, I do play indie games that take risks… It’s rare that we get the opportunity to work on something so fresh.”

Specifically, Arkane’s Dinga Bakaba took note of two indie game inspirations in What Remains of Edith Finch (specifically for the game’s floating text) as well as the gorgeous and beautifully scripted Firewatch. Bakaba noted that the characters in Deathloop don’t talk like video game characters. There’s a realness and authenticity they’re trying to achieve which is admirable.

Also noteworthy is the game’s unique approach to multiplayer. Deathloop can be played entirely solo if the player desires, although according to the development team, the best way to play is with a real player enemy. Julianna, one of the game’s 8 Visionaries, has a level of autonomy and narrative presence far beyond that of the other characters. She can basically invade your world at any given time, somewhat like a Dark Souls game. Of course, the most threatening and intelligent enemy is that of a real player, so playing online brings a new level of tension and challenge to the experience.

Julianna and Colt also have a very interesting relationship. Sometimes hostile, sometimes friendly, sometimes flirty. There’s a history that’s teased here that immediately intrigues me and I just need to learn more. Ultimately Arkane are looking to make a game “people will remember” and it honestly seems as though they’re well on their way.

Whilst it was great to learn more about Deathloop mechanically and narratively, I also wanted to celebrate its cultural representation with a protagonist and antagonist who are both people of colour. It’s a huge rarity in video games, especially in the AAA scene. When asked, the representatives from Arkane said creating a black protagonist was something they embraced quickly. They understood it was a rarity, but were quite humble in their answers, not trying to necessarily make a deliberate stance for diversity, but to just create great characters. “I don’t think there was any big concern. It’s only when we came on stage at E3 that we noticed both protagonists were black.” The team noted that many of their inspirations came from more diverse mediums such as film, so the diversity didn’t feel particularly strange. “Hopefully it makes the conversation easier.”

Deathloop is launching across PC and PS5 exclusively on September 14, 2021. Are you hungry to get stuck in the loop?