Phantom Abyss has launched on Steam as an Early Access release, allowing players to take their trusty whip and spelunk deep into a booby-trapped temple in search of relics. The game comes to us from kooky-yet-reliable publisher Devolver Digital and Brisbane-based Team WIBY. I’ve spent the last few days absolutely absorbed into Phantom Abyss as I navigate its many traps and uncover its various oddities. The game at its heart is a roguelike experience, complete with procedurally generated dungeons and a permadeath system that kicks you back to the temple’s entrance upon death. Where Phantom Abyss differs from other Roguelike’s however is not just in its Indiana Jones presentation, but also in its various unique systems that has lead to the descriptor “asynchronous multiplayer” being applied to the game.

Played from the first-person perspective, players will run through temples, leap over traps, open treasure chests and attempt to make their way to a valuable relic at the end. Your whip is a crucial tool that can be used to open chests at a distance and to grapple your way up to high ledges or across larger gaps. Your whip range and frequency of use is limited, yet the trusty tool becomes second nature to the player as you zip your way around these dastardly temples. As a first-person platformer, Phantom Abyss totally succeeds. It’s generous and controllable enough to not feel frustrating whilst remaining a fairly decent challenge for any who dare test their might.

Phantom Abyss’ multiplayer elements come into play when you start seeing the ghosts of other players around you. Much like a time-trial racing game such as Trackmania, Phantom Abyss allows you to see the outlines of the players who came before you, watching the actions they took and even witnessing the way in which they died. In Phantom Abyss, only one player can ever complete any given temple, or at least so we’re told. That means that all the ghosts around you are from players who failed that specific trial, putting more pressure on you to do what they weren’t able to. As you progress deeper into the temple, you’ll start amassing gold found in chests which can be spent at shrines for upgrades. Upgrades range from very useful movement advantages like a longer whip or double jump to crucial health upgrades such as increasing your maximum health or recovering lost life. Exploring further yet and you’ll reach a point where you can decide to complete one final challenge to unlock a relic or go deeper into the temple to unlock rarer relics.

Failing any run means you’ll go back to the beginning and you’ll also lose any permanent currency you may have accumulated on that run. This currency is used to buy new whips, amongst other things, which bring advantageous properties to hopefully help you do better on your next attempt. These special whips can also be lost in temples if you perish, but will be returned to you once somebody else finishes what you couldn’t and completes the temple that ended in your demise.

Phantom Abyss is staggeringly unique and content-rich for an Early Access release. The asynchronous multiplayer is really unlike anything else I’ve seen before and it’s all the better for it. I love watching the ghosts of other players around me. Sometimes I’ll choose to race those ghosts (because, why not) but mostly I’ll study them and learn new paths I didn’t notice or see them get hit by traps I didn’t see coming. I’ll watch as ghosts run past an upgrade they can’t afford to purchase because they weren’t as methodical as they should have been in uncovering chests throughout the levels. It’s all useful information for the player to distil or ignore at their own will.

It’s also just so fun to think of these ghosts as players who died in this specific temple. It’s often the extra kick you need, a reminder that this game isn’t easy and that you’ll have to concentrate should you wish to succeed in spite of all the past failures. There are other interactions you can have with ghosts too, making them not merely an aesthetic mechanic. One whip that you can unlock, for instance, will heal you slowly over time if you’re near to a ghost of a former player. It’s a great tool for those early dungeons with heaps of past players, but not so useful the deeper you venture where fewer players or no players have made it. Sometimes you’ll even get a brand new temple that no other player has ever attempted, making that whip’s special ability completely useless. But hey, that’s the randomness of this style of game I suppose. 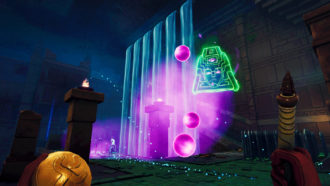 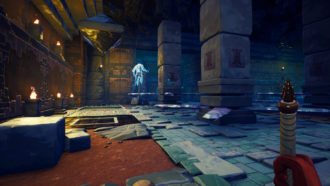 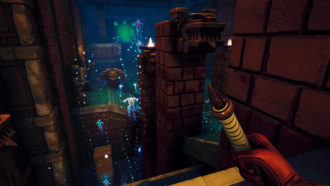 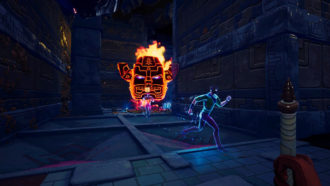 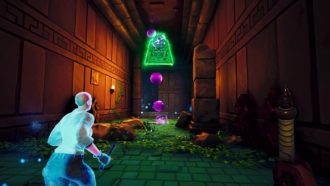 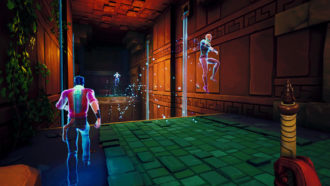 Whilst the temples you delve into are randomly generated, there’s definitely a lot of commonality between one temple and the next. The way the procedural generation stitches things together means that no two runs are identical but likely similar in one way or another. This is to be expected really, although definitely an area that can hopefully be improved with more updates. You do start to feel more comfortable the more you play and can learn where chests are going to be placed based on what you’ve seen before. Removing some of that predictability for more veteran players can only be a good thing.

The game also features Guardians who watch the temples and attack the player. It reminds me of other systems roguelike games have implemented previously to ensure the player is always moving at a reasonable speed and punishing those who are too slow and meticulous. This is especially true of one Guardian who basically just hunts you down and kills you in one hit should they ever touch you. The other two Guardians are a little more forgiving, one lobbing gas bombs around whilst the other shoots lasers. I honestly don’t love this system. I understand the need to increase difficulty within these temples and speed players up, especially as they get deeper. But the Guardians can absolutely kill your flow and how punishing they are tends to feel very random. Some temples require you to obtain a key and then double back to a door that’s locked to progress. Get a particularly speedy Guardian who hunts you down and combine that with tight corridors and world generation that forces you to double back on yourself and you’re basically guaranteed to die. I’m not sure what I want from the Guardians but they don’t feel right just yet, especially considering the rest of the game feels so controlled and balanced compared to these annoying elements.

“Phantom Abyss is staggeringly unique and content-rich for an Early Access release.”

I’ve spent a good deal of time with Phantom Abyss now but I’m certainly far from done. The game continues to let me unlock new whips, remove curses from whips through succeeding in a trail, delve even deeper into these temples and continue to push for harder and harder relics. There’s a lot of content on offer and it’s one of those rare occasions I don’t really feel as though I’m missing out by not waiting for the game’s full release.

There are some systems that aren’t yet fully functioning yet, although that is the nature of an Early Access release. With that said, I am yet to come across any egregious bugs or missing features that have negatively impacted my experience with the game. Phantom Abyss is truly a unique and engaging experience that isn’t afraid to pave its own path and bring new ideas to the table. I hope the game continues to see the love and attention it deserves as more players uncover the oddity of this release. The game is available now on Steam for PC.