As sure as the sun will rise tomorrow, Japanese studio Capcom will find a way to put their beloved 2005 horror-action game Resident Evil 4 on a new platform. This time, the villager-shooting, President’s daughter-defending affair led by Leon has arrived on the Oculus Quest 2. It’s not the first time the franchise has landed in the VR space, Resident Evil 7 set the precedent for that. Still, the premise alone has this as the VR Corner adventure I was most excited to jump into. What’s a better sell than ‘Resident Evil 4 but in VR’? Not much else.

What I can say coming out of this newer, revamped version is that I certainly hope it’s not the last time the series lands on such a platform. Seriously, Resident Evil 4 VR is great; please don’t stop putting this on everything.

The premise for Resident Evil 4 on a VR platform is exactly what you’d expect: the horror-action classic moved to an immersive first-person perspective, with few concessions. Players familiar with the journey across Europe, working towards rescuing the President’s daughter Ashley will feel right at home.

It too is a great way to see the game in a new light. While the story and 99% of dialogue remain the same there are some tweaks to lines here or there. Some of the original changes are maddening but others I found charming and more to the point. Objectification and interactions with Ashley were particularly lessened, having side character Luis’ first meeting with her being a little less abrasive. What this results in is a feeling of this being the most modernised and distinct version of Resident Evil 4 yet. That is until that long in the works full-blown remake eventually releases.

The original Resident Evil 4 is particularly known for its high octane horror-action setpieces. So much so, I couldn’t help but wonder how Capcom were to ever pull off translating that gameplay feeling. Thankfully, they did a pretty damn good job.

Due to the fact that the survival horror elements provided require a combination of slow, cautious combing around corners and thinking quickly on the fly, moving that to VR is frankly quite complimentary. Akin to other VR Corner forays I’ve crept into before, reaching towards different parts of your body will retrieve a variation of weapons, be that a pistol, your more powerful two-handed weapon or that beloved knife to familiarly smash open a crate and retrieve goodies inside. This swapping between different means of attack (and even healing items) on your person without entering any menus is handy for the swarm of enemies ahead of you.

And swarm you they absolutely will. Encounters like the ogre-like El Gigante, the crab-like Menendez or the waves of enemies you, Luis and Ashley face off in that cabin… they all return here. Already Resident Evil 4 had the tough challenge of pitting you in these small arenas during such a fight.  Now, you have to work out just how to teleport around, maintaining quick control of these points, entirely in a new, more limited perspective. It’s not easy and requires players to be even quicker on their feet.

“Resident Evil 4 is one of the most comfortable VR games I’ve ever played.”

As a result, mastering the swapping between items became more rewarding. Many a situation had me swapping to my sidearm in moments of tension, rather than taking the time to reload my double-handed weapon. The knife feels a little limp and doesn’t connect with enemies in quite the satisfying way you’d want it to à la BONEWORKS, which can be disappointing, but that’s somewhat to be expected. It always was the last resort, low damage weapon.

There’s still all your other beloved survival elements too. Inventory management is still very much a thing. In-menu, players can more manually move around the items in the suitcase, adding that extra level of immersion. Low-health crawls to that mysterious merchant are all the more a relief in this new perspective. You alone as the player feel like you made it through these tough moments and are rewarded with a place to spend your own money. Not Leon.

What’s most pleasing to report here is Resident Evil 4 is one of the most comfortable games I’ve played for Checkpoint’s VR Corner segment. While difficulty options and choosing whether your method of movement is more literal or teleporting have come to be accepted, Capcom has gone one further. Instances such as the lake section that sees me fighting Del Lago gave me the option to pull the camera out and steer my boat around in a third-person perspective, removing the motion-sick feeling I otherwise get being in a fast mode of transport in VR. 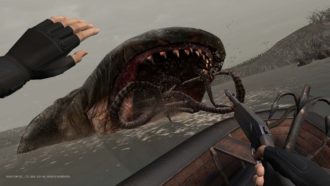 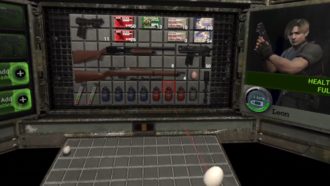 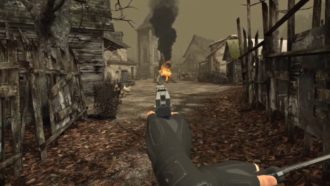 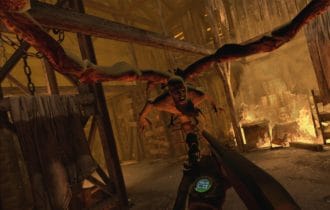 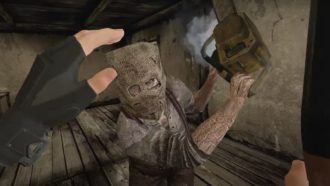 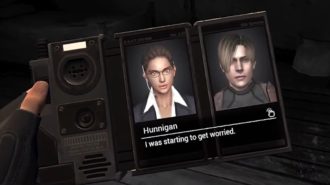 As I mentioned prior, there are some concessions that come with playing Resident Evil 4 in a VR context. This isn’t quite a full-scale remake. In-game visuals still look more or less the same fidelity you’ve known them to be all these years. Not everything is in that first-person perspective. In fact, a lot of the story is delivered to you in cutscenes you watch play out on a screen situated in front of you.

While that may sound like a disappointment, it’s entirely forgivable when you consider how hard these would be to make work in a VR setting. Leon is quite the acrobatic protagonist, performing highly agile flips and the like. The camp fashion of character portrayals still gets to shine here, once more seeing Leon do these insane feats in full body form.

With that aside, the style for Resident Evil 4 still remains timeless. Creeping around the littered with leaves village, wandering around the outskirts and facing sheer monstrosities, dread awaits every corner. It’s excited just how much more immersive this game is, 16 years on.

Like every re-release and port of Resident Evil 4 prior, a VR version of this game doesn’t particularly need to exist. Yet, I am so glad it does. Experiencing one of the horror-action games that changed the market in a new context is entirely indulgent and enjoyable.

I’m about halfway through my journey back into this horrific world. I don’t know how often I’ll jump in, much like my many delves of the game I’ve done over the year, but I’m pleased it’s there waiting for me. Resident Evil 4 rules. Resident Evil 4 forever.

Returning or otherwise, players can dip their toes into Resident Evil 4 in VR now on the Oculus Quest 2. Check it out. You can also check out some of Checkpoint’s other VR Corner feature articles here.