To honour the community and celebrate Diablo’s 25th anniversary this year, tattoo studios around the world participated in the Diablo Hell’s Ink takeover tour. Kicking off in Los Angeles and finally making its way to Australia in the last week, we visited Oculus Tattoo on the land of the Wurundjeri Woi Wurrung, in the Kulin nation (Naarm, Melbourne). The studio was decked out with Diablo art, props and music for the real Tristram experience thanks to Studio Owner and Tattoo Artist, Beny Pearce.

Each Diablo Hell’s Ink takeover event features some of the world’s greatest tattoo artists working on ink based on the Diablo universe with their own unique art style, for a few of the world’s biggest Diablo fans. At Oculus Tattoo, people were lined up from as early as 5am on Saturday 3 September for the 11am opening time. The line was large, the excitement was strong, and the will of adventurers remained as powerful as ever.

A flash sheet of many familiar designs and icons from the world of Diablo was available for everyone to pick from. Barbarian helmets, Paladin shields, Demon Hunter bows and even the opportunity to get an imp from the game tattooed on your face. Each design was unique and interesting, with all of them eventually being chosen by the nearly 100 people who received a tattoo on the day.

A competition was held for a larger, bespoke piece designed by artist Clyde CK. Entrants needed to share how personal their connection is to the Diablo franchise via social media and tag their relevant city. The winner for Naarm (Melbourne) was in the chair nearly all day getting an amazing chibi-style Demon Hunter placed on her leg.

Oculus Tattoo has been operating for six years, starting when Beny Pearce left Boorloo (Perth) to start a new chapter in Naarm (Melbourne). Since its establishment, the studio’s notoriety has exponentially grown for how dark, gothic, and evil the designs and decor of the space is. Beny’s outstanding photorealism designs have caught the eye of many famous people and figures from around the world, making the shop one of the best in Australia.

Although Beny doesn’t play too many games because of how easily he is addicted to them, he resonated with the opportunity to collaborate with the Diablo universe. Many of the other artists in the studio, such as Oliver Sel and Dead Cherub, are diehard fans of the franchise and couldn’t let Beny pass up the chance to be a part of Diablo Hell’s Ink. In the end, it was a perfect match as both Diablo and Oculus Tattoo thrive in the dark, spooky vibes of horror. 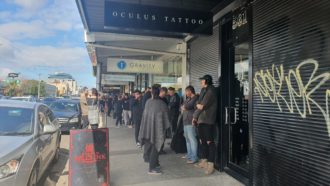 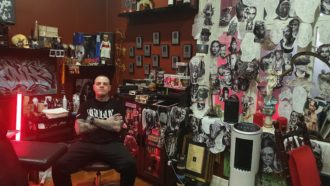 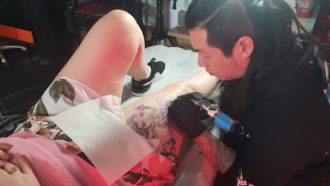 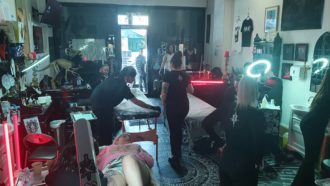 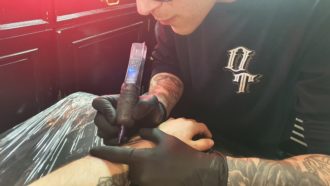 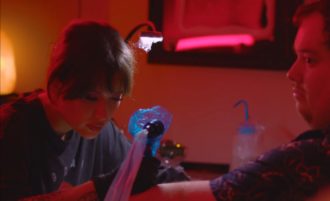 Despite recent criticism, the universe’s newest game Diablo Immortal is currently very successful for Activision Blizzard, netting the company AU $34.6 million in just its first two weeks. This makes the free-to-play Diablo spin-off Blizzard’s second-highest earner on mobile, behind Hearthstone. Likewise, Diablo IV is the next PC and console-focused premium entry in the franchise and everyone is incredibly excited to see it return to the series’ darker roots.

Tattoos have been used by Diablo fans all around the world to express not just their love for the franchise, but also the stories of family, friendships, and experiences formed while playing Diablo games. We got to see a lot of that over this weekend and look forward to more when Diablo IV releases in the near future.