Sackboy: A Big Adventure on PC is fresh off the knitting needles

Sackboy has been a poster child for Sony since the PlayStation 3. Starting in 2008 with LittleBigPlanet, the franchise had two sequels that took it into the PS4 era. Aside from a mobile and PSVita game called ‘Run Sackboy! Run!’ in 2014, the IP has been pretty quiet. But in 2020, Sumo Digital developed Sackboy: A Big Adventure, with a PS4/5 release. The game was rated highly by a lot of outlets, including our very own. A Big Adventure is a little different to other LittleBigPlanet games, this one having 3D movement and doesn’t feature levels created by fans. Now, the game has been released for PC on Steam and the Epic Game store. Compared to previous PlayStation games, this one isn’t a remaster, but it is another exclusive brought over to the PC.

The craft and the furious

If you’ve never played a LittleBigPlanet game, you don’t need to worry about missing out on crucial plot, which is awesome considering the first game came out two console generations ago. In A Big Adventure, Sackboy is tasked with saving the other Sacklings who have been captured by Vex (voiced by Richard E. Grant). The game has some amazing voice work, like the hilarious Dawn French and Ève Karpf who was recently in A Plague Tale. While there is a very simple plot, there are still some fantastic performances and tiny stories within these worlds that keep you playing for more.

As you progress, you’ll find things called Dreamer Orbs, these orbs are crucial in progressing forward in the story. They’re very liberal in their approach to giving out these orbs. Some you might have to hunt for as you go through levels, only finding 1 at most. At other times, when you’re given time to pause and look, you can find all 5. I do say liberal in that by the time I finished the first world, I had nearly enough orbs to go to the third world. The annoying thing with this (though understandable) is that you can’t actually go towards the boss fight of the game. You have to go through each level no matter how many orbs you have. 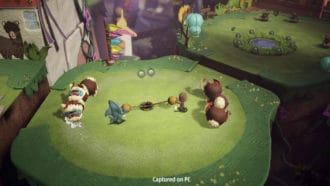 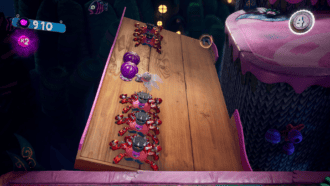 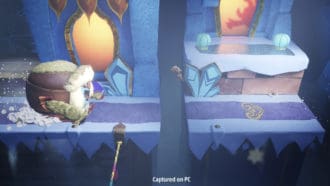 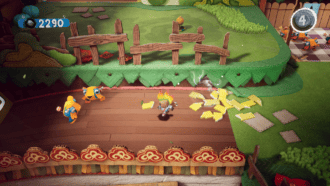 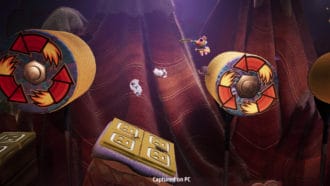 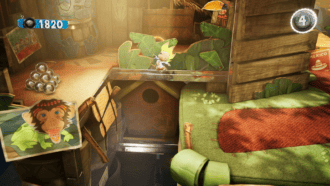 A shot in the yarn

The gameplay itself is similar to any sort of modern 3D platformer. Each new level throws out different elements, whether it’s from weapon type or enemies that you learn how to use or defeat. The game has shortcuts to additional levels in different worlds, with certain levels only able to be completed with another player. It sucks to be locked out of levels when you play solo, especially considering there are some collectables locked to those levels. Although playing with another person is a tonne of fun, especially as players are able to have fun interactions with one another. Funnily enough, you can get an achievement from stealing a trophy from another player.

One of my favourite kind of levels throughout the game are the musical number ones. Usually they’re levels where a song will be played in the background and as you progress forward in the level itself, you hear more of the song. Some are very obvious, like the Uptown Funk level. But, my favourite is one of the shortcut areas to the space world. And in that level (called The Struggle is Rail), they actually play the Futurama theme song. There’s a lot of fantastic sound design in this game. When you’re inside a room or one of the booster plants, the music is actually muffled which is fantastic attention to detail!

“When you’re inside a room or one of the booster plants, the music is actually muffled which is fantastic attention to detail!”

Speaking of collectables, the game allows you to customise your Sackboy however you like. They even have a pride outfit which is pretty cool (or garish depending on your view). The punk rock vibes are the ones I rocked with the most. As stated, you can find a lot of these collectables in the levels, or buy them from Zom-Zom (pronounced Zoom-Zoom). I love the fact that Sackboy is something that you can mould into your own thing. Want to make them look like Alloy from the Horizon series? Sure! Want to make them look like a Las Vegas entertainer? Why not! Sackboy is whatever you feel fits you.

The actual look of A Big Adventure is really cool. I am a knitter, so seeing the knit stitches (looks like a V) is really interesting. The whole world is made out of crafting supplies and you can see little details like sowing stitches keeping the fabric together. Seeing the unconventional materials being used is really cool.

Now, the question is, what’s the difference between the PS4/5 version and the PC? First is that it’s in 4K and is up to 120FPS. The game is gorgeous, being able to see the fibres from the yarn that Sackboy is made out of really just hits. I’ve only had lag happen once, but other than that it’s pretty smooth sailing. It has ultrawide support, variable refresh rate, and NVIDIA DLSS support, which unless you have special eyes, you probably can’t tell the difference. Because it’s one of the newer games from Sony and not a remaster, they didn’t need to do a huge number of graphical updates. But man oh man doesn’t it look nice. The colours pop and the smoothness of it is really satisfying to look at. It’s just a pretty game.

On the accessibility front, there are infinite lives, which is helpful for anyone. There’s a colour-blind mode for 4 different versions of colour-blindness, and the ability to get rid of camera shake. Being able to change the background colour of subtitles, the size, choosing whether to colour the speaker’s name AND a dyslexia font that doesn’t “sacrifice the aesthetics” is all here too. There isn’t an option to show subtitles for where the sound is coming from. But, other than that, it is really awesome to see Sony leading the change when it comes to accessibility options in games.

Sackboy: A Big Adventure is a fantastic game. While I had a small number of issues, they pail in comparison to my enjoyment of the full experience. It’s really great to have Sackboy come to PC, as it was a series I really wanted to play but I never had the correct consoles to play it on. Using the PS5 controller on my PC, I will admit I didn’t notice a major difference. But that’s fine, as I’m not missing out on anything crucial. Overall the game is a lot of fun, and something I know I’m going to have to 100% complete.