Sackboy: A Big Adventure Review – Charming and full of imagination

The knitted hero known as Sackboy originally debuted in LittleBigPlanet back in 2008, and has returned in its various sequels and spin-offs. Although that franchise has been dormant since 2014, Sony Interactive Entertainment knew that Sackboy is too iconic and adorable to not give him his own game, and thus Sackboy: A Big Adventure was born. Developed by Sumo Digital, Sackboy: A Big Adventure eschews the focus on level creation from the LittleBigPlanet series. Instead, the game puts Sackboy on a 3D-platforming quest across multiple settings to save Craftworld from the villainous Vex. The end result is a thoroughly charming and imaginative platformer that gamers of all ages should be able to enjoy.

Set in the arts-and-crafts themed land of Craftworld, our hero Sackboy is set on his quest after the patchwork menace known as Vex (voiced by a gleefully over-the-top Richard E. Grant) kidnaps the other Sacklings to force them to create a machine to spread Uproar throughout Craftworld and fill it with nightmares. It’s about as much context as the game needs, and the various Craftworld denizens that aid Sackboy on his adventure are all suitably charming and quirky. Sackboy himself does not display that much personality, outside of what the player imbues him with by virtue of the varied character customisation options. Despite the lack of much plot, the incredibly adorable presentation and strong performances kept me engaged with the narrative. 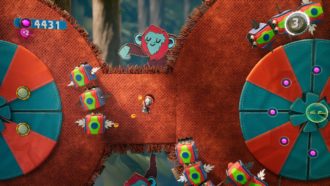 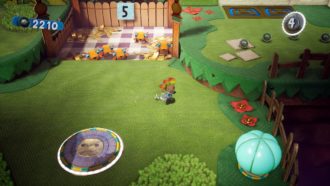 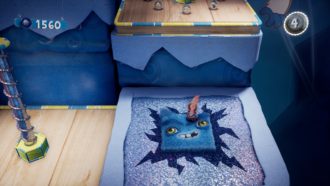 As for the gameplay, Sackboy: A Big Adventure is a 3D platformer with some light puzzle elements, in the vein of Super Mario 3D World or the various LEGO games. I was quite impressed at the variety of level gimmicks and challenges on display. The game introduces new mechanics and hazards regularly enough for each world to feel fresh.

For instance, some levels provide tools, such as a boomerang or grappling hook, to expand Sackboy’s moveset. Others feature a constantly-scrolling stage, preventing backtracking and keeping the player on the move. My favourite levels were the musical ones, where enemies and stage hazards moved to the beat of various licensed tracks, ranging from Uptown Funk to David Bowie’s Let’s Dance, among others. They felt like less on-rails versions of the musical levels from Rayman Legends and brought a similar level of energy and intensity to proceedings.

“It’s the perfect game to play with younger family members or friends, or if you’re just after a less intense experience…”

Sackboy: A Big Adventure has some tricky platforming sections (as well as an array of more challenging time trials and post-game content), but for the most part, the game is a fairly relaxed experience. I found the overall atmosphere and gameplay to be quite engaging, but players looking for a more meaty challenge may be best served to look elsewhere. It’s the perfect game to play with younger family members or friends, or if you’re just after a less intense experience than a game like Crash Bandicoot 4. 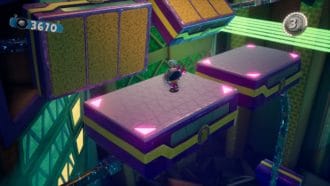 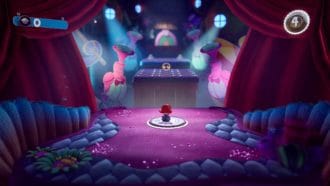 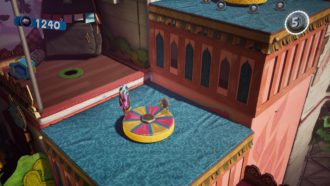 New worlds are unlocked by finding Dreamer Orbs, of which there are usually 3-5 hidden in each level. Although I did not usually find all of them, I found enough that I rarely needed to grind to unlock the next areas, which probably speaks well for the game’s design. Although the actual gameplay may not be very challenging, those focused on 100% completion will have their work cut out for them.

Levels can be played alone or cooperatively (although only local multiplayer at the moment). Some of the most fun I had was in the Teamwork levels, which can only be played with a friend and focus around team-based puzzles. The fact that there are rewards and collectibles exclusive to those levels was somewhat annoying though; it would be good if an AI support character could be added so that those levels can be accessed for solo players as well.

Each level looks and sounds incredibly gorgeous. The whole “arts-and-crafts” visual aesthetic is no longer as unique, now that Nintendo has been co-opting it for their own platformers. However, the way that platforms, stage hazards and background elements took on the appearance of cardboard, felt and cloth never got old for me and made each world feel memorable and distinct. The Haptic Feedback feature on the PS5 Dualsense controller gave the various materials their own tangible feel that really added to the experience.

I also had a great time playing around with the character customisation, a feature hearkening back to LittleBigPlanet’s roots in player content creation. Costume pieces and emotes can be bought with in-game currency, or found hidden in levels. Whether you want Sackboy to look like Elvis Presley, a Viking, a dragon, some ridiculous combination of all three, or something else entirely, Sackboy is yours to design.

Nearing the end of an undeniably stressful year, the sheer adorableness and relaxing charm of Sackboy: A Big Adventure is exactly what I needed. Although not super challenging, I found Sumo Digital’s newest platformer highly engaging and enjoyable, with just enough gameplay and visual flairs to sustain its 10-or-so hour story mode. The game is particularly great fun if you have a partner, friend or family member to play with. That said, that should not stop solo players from seeking it out, particularly once online multiplayer is patched in.

In terms of visuals, it might not show off the PS5’s processing power like, say, Godfall does. However, the detailed art direction and small touches, like the Haptic Feedback feature, add to the experience nonetheless. If you’re a fan of platformers, or just looking for a game the whole family can enjoy, Sackboy: A Big Adventure is an easy recommend.