SpellForce: Conquest of Eo is an upcoming turn-based strategy game that’s being developed by Owned By Gravity and published by THQ Nordic. The title is the latest entry in the SpellForce game series and will be released in full sometime in 2023. Luckily, our team was able to get a preview of how the title is shaping up!

The SpellForce games have been around since the early 2000s, and form one of THQ Nordic’s flagship franchises. The titles have consistently been well-received overall and are known for their RPG mechanics and RTS battles. SpellForce 3—the recently-released prequel in the series—received scores of DLC expansions and had many fans hoping for a speedy release of SpellForce 4. Alas, SpellForce: Conquest of Eo is no sequel. While the title is set in the same story universe, it’s best described as a standalone chapter in the SpellForce story, rather than a prequel or sequel to any existing games in the series. You play as a wizard’s apprentice who has vowed to avenge their fallen master. As you arrive at the former master’s home, you discover that your master has been killed, and his tower has been ransacked. After exploring parts of the tower, you set out on a quest to uncover the truth and, in the process, restore your master’s home to its former glory.

The preview build comes with three apprentice archetypes to play as: the alchemist, the necromancer, and the artificer. Each archetype comes with its own unique magic skills and perks. As the name suggests, the necromancer is able to revive the dead and use them as units, while the alchemist relies on potions to strengthen their troops and the artificer crafts glyphs and artefacts to give their units new abilities in battle. You’ll also have three starting locations to choose from: the golden fields, the Alluvyan forests, and the mountainous Draycott valley. Each one of these locations comes with a different difficulty level, a different set of enemies, and unique in-game events and challenges.

The in-game map is where things get interesting. SpellForce: Conquest of Eo is the very first game in the series to feature turn-based gameplay in addition to its RTS battles. Similar to titles like Age of Wonder: Planetfall or Total War, most of the core gameplay takes place on an overarching world map covered by a fog of war. Like other turn-based titles in the genre, you can bundle up small army units into stacks containing up to four units. In turn, you can use these stacks to uncover more of the main map from turn to turn. You’ll have a number of stats to keep your eye on during a game too: gold, mana, research, mastery, and allfire. While gold can be used to buy and sell things, mana is the energy required to perform magic spells. Mastery and allfire are key stats to unlock upgrades later in the game. Research is used to unlock spells that can be used both in battle and on the overworld map.

The game’s main story is told through ‘main adventure’ encounters. These can be accessed by navigating to specific story locations that will unlock written encounters once you get there. The writing in these encounters provides an engaging way to deepen the world’s story lore within a strategy game. The dialogue is evocative and aids the immersion of the game’s fantastical story world. Added to this, you’ll also come across random encounters as you traverse the map. Often, these encounters come with recurring characters. In one encounter, for example, you find a merchant asking you for sweets. If you decide to not engage in battle and give him some, you’ll encounter him again and again, and learn more about his behaviour and band of thieves in the process. 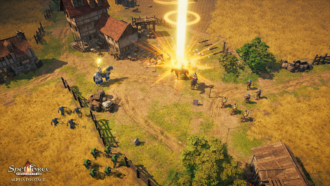 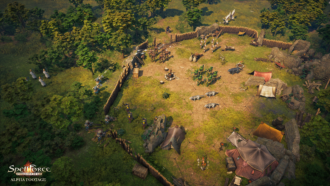 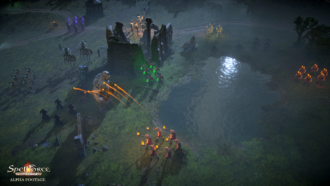 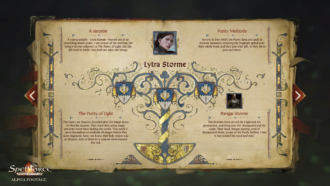 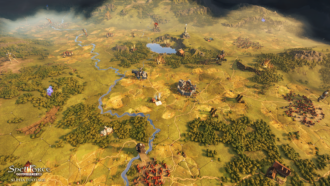 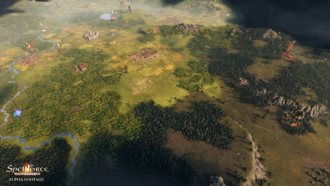 Practically, the most important landmark is the wizard tower formerly owned by your master. This tower functions as a base for all your units and allows you to establish a ‘domain’, an area of influence represented by coloured borders that are generated by your tower. Any units inside these borders will be affected by your domain’s influence. While your troops will have bonuses like increased willpower and output damage, for example, enemy units will have to deal with disadvantages on the battlefield that can range from increased sensitivity to a certain type of damage to a negative impact on movement speed. You’ll also have apprentice and hero units at your disposal to bolster your troops. These units work in similar ways to heroes in games like Age of Wonder and come with unique spellcasting abilities as well as the capacity to carry magic objects. On top of this, these hero units are also able to build lodges as you explore the map, which helps significantly when it comes to expanding your tower’s influence. If your tower is destroyed by an enemy unit, you lose the game. Expanding your tower’s domain is key since it allows you to explore the map more efficiently. You can expand your tower’s influence by building lodges or by restoring different rooms in your tower. Each room can be unlocked with research, gold, or mana and provides different kinds of benefits. This, in turn, helps bolster your domain’s effects more efficiently.

“…it’s engineered to make players explore as much as they can.”

You’ll encounter other effects outside of your tower’s borders as well. Battles in SpellForce: Conquest of Eo follow a format similar to Age of Wonders: Planetfall or the Total War series. Like the aforementioned titles, you’ll get a dedicated combat preview pop-up every time you engage an enemy unit in battle. The pop-up will show you the estimated battle outcome based on comparing you and your enemy’s unit numbers and give you the option to auto-resolve combat, retreat, or engage in a full turn-based battle. On top of this, it’ll also show you any battlefield effects (known as battle enchantments in-game) resulting from your whereabouts on the overworld map. If you’re right near an enemy base, for example, enemy units may get an advantage on the battlefield.

To anyone who has played games like XCOM or Age of Wonder: Planetfall, combat will feel familiar. It takes place on a dedicated battle map, and you’ll be able to decide the actions of your individual units from turn to turn. Each unit has three action points, which can be used to attack, defend, or move across the battlefield. After defeating an enemy, surviving units gain XP individually and can level up individually, too. In-game enemy units include goblins, mages, wolves, and everything in between.

While these battles are certainly engaging, one of the most exciting things about the title is the dynamic nature of the overworld. Every map mechanic in SpellForce: Conquest of Eo feels like it’s engineered to make players explore as much as they can. Aside from the ability to build lodges using hero units, other troops also have the ability to harvest items. This ability allows units to travel to tiles on the map to recover ingredients, which in turn can be used to craft unit upgrades specific to your archetype. Then, there’s the allfire—the essence of all magic in the SpellForce world—which can be ‘melded to’. Once melded, the allfire can be used in a skill tree to increase your research points, mana, or mastery. This, combined with the game’s dynamic way of storytelling through its events, makes for an unusually layered story within a turn-based strategy game. Fans of the SpellForce universe will therefore be thrilled to know that the familiar stories are still there, despite the franchise’s pivot into turn-based strategy gameplay.

All in all, the SpellForce: Conquest of Eo preview was an enjoyable experience that’s already packed to the brim with interesting mechanics and character stories. So far, the build looks incredibly promising, and, with a bit more time, is sure to be an engaging strategy experience. We’re already looking forward to the full release in 2023.