Total War: Warhammer III is a turn-based real-time strategy game developed by Creative Assembly and published by Sega. It’s the latest instalment in the Total War franchise and is set in the Warhammer universe. It comes with a single-player campaign mode, a multiplayer campaign mode, and a local and online matchmaking mode. The game comes with several factions to play as, including the Kislev, the Grand Cathay, the Nurgle, the Slaanesh, the Khorne, the Tzeentch, and the Ogre Kingdoms.

As the title suggests, Total War: Warhammer III is the third and final instalment in the Total War: Warhammer trilogy and is a direct successor to Total War: Warhammer and Total War: Warhammer II. Building on the story of its predecessors, Total War: Warhammer III comes with a layered single-player campaign that sees you freeing a captured god named Ursun from the claws of a demonic prince called Be’lakor. During the narrative prologue campaign — which also functions as the game’s tutorial — you play as a prince of the Kislev faction called Yuri. After going through a long and harsh winter with no Ursun to dispel the cold, Yuri sets off to find Ursun, and save the Khislev people from the devastating frost. So, it’s up to you to locate the trapped god, traverse the Chaos Wastes, defeat enemies, and gather clues on Ursun’s whereabouts.

Aided by a trusted advisor named Gerik, you’ll learn about the detailed ins and outs of the Total War gameplay format, right from the basics of setting up a camp, all the way to choosing units for your army and recruiting unique heroes. Gerik will frequently give you his opinion on developments in the story, along with missions that will see you grow your army and invest gold in your settlements. If you’ve played other entries in the Total War series — no matter whether they were set in the Warhammer universe or not — chances are that what’s covered in the tutorial will feel familiar to you. For Total War veterans, it might be tempting to dismiss the tutorial prologue, but it’s worth playing through the whole thing just for the story. Complete with great voice acting and stunning cutscenes, the prologue is incredibly engaging as a standalone campaign. Without wanting to spoil anything, it’s easy to say that Yuri is an intriguing and layered character, and the prologue campaign sets up the narrative stakes for following single-player campaign.

Like all Total War titles, the core gameplay formula in Total War: Warhammer III consists of a blend of turn-based strategy and real-time military battles. To win a game, you’ll need to craft a well-functioning army, conquer and occupy settlements, explore the map, and take out enemy factions. While this sounds straightforward enough, there’s more to it than meets the eye. For starters, there’s a lot to manage on the map before you even set foot on the battlefield. In order to grow your army, you’ll need to keep an eye on your income and build up settlements to generate enough gold every turn. Similar to games like Civilization, you’ll have to balance your income along with your army’s size; recruit units too quickly and you’ll operate at a loss, but wait too long with building up your settlements and you’ll have trouble maintaining multiple armies down the line.

You won’t just need gold for your army, either; it’s helpful for diplomacy too. Like many other strategy games, Total War: Warhammer III’s diplomacy system allows you to strike deals with other factions including military alliances and non-aggression pacts. The likelihood of a deal succeeding, however, will depend on the faction’s attitude towards you, which is represented by a number in the diplomacy panel. If a faction is friendly, for example, their attitude number will be higher, indicating that any deals you propose have a higher chance of succeeding. However, if a faction is hostile towards you, your deal is more likely to fall through. However, if you’re in desperate need of an ally, you do have the option of swaying a faction with a lump sum of gold in addition to your diplomatic proposal. This can often make the difference between winning and losing a crucial battle.

“…forms a great conclusion to the epic Warhammer trilogy.”

You’ll need all the allies you can get, both on and off the battlefield. Just like in Total War: Three Kingdoms, some of the most crucial characters you can recruit as allies are Lords and heroes. Similar to games like Age of Wonders: Planetfall and Warhammer Age of Sigmar: Storm Ground, these hero units come with unique traits and skill trees that you can develop throughout a game. A hero will gain different traits based on the decisions you make both on and off the battlefield. During our playthrough of the prologue campaign, for example, after defeating a Tzeentch enemy army three times, Yuri gained a trait where he would get a leadership bonus whenever he took on a Tzeentch enemy in the future.

Depending on the hero in question, you can choose to let them lead an army or explore the map alone. Some hero characters have assassin abilities, allowing them to take out enemy units singlehandedly. These abilities can make all the difference in a playthrough, since you’ll be able to strategically weaken an enemy faction by cleverly positioning different heroes on the map. On top of this, heroes can also equip weapons, magical items, and ancillaries, which all come with active and passive bonuses on the battlefield. Since most heroes also have magical attacks that can be used during battle, equipping them with protective gear is paramount; once the hero unit of an army falls, the other units are soon to follow. Luckily though, fallen heroes can always be recruited again at one of your settlements, although this usually comes at a cost. As such, you’ll have to be strategic with levelling up your heroes’ abilities and think carefully about how to use each hero in the midst of battle. 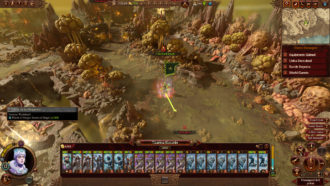 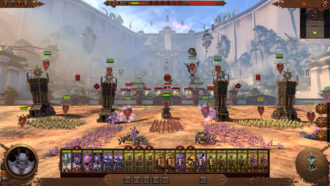 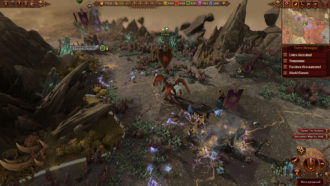 Because it’s Total War, there are a lot of battles. As with previous Total War games, you either have the option to fight it out in an RTS battle when you come across an enemy or auto-resolve the conflict instead. However, while skipping RTS battles might appeal more to players who prefer the game’s diplomacy and settlement management mechanics, the real-time battles are fun to play and visually impressive. Compared to its predecessors, Total War: Warhammer III’s battlefield locations are more detailed, complete with snowcapped mountains, castle walls, and ravines. For the first time, players also have the opportunity to challenge their opponents inside enemy settlements after besieging a faction’s city.

Going into battle is one of the most exciting parts of Total War: Warhammer III, mostly because battles often come with surprises that spice up combat. As you progress through the narrative campaign, for example, you’ll often have to face off against foes through quest battles. On more than one occasion, when I thought I’d won a quest battle, I was surprised by enemy units storming the battlefield from unexpected places, meaning I had to scramble to cover a flank of my army. While these surprises were challenging and sometimes even frustrating, they made victory feel all the more satisfying. These unexpected turns didn’t just liven up the narrative during a quest battle; they also made me think on my feet. Compared to other games in the genre, a hard-earned victory in Total War: Warhammer III gave me a rush, and it kept me coming back for more, battle after battle.

There are plenty of surprises off the battlefield, too. As you explore the map, you’ll cross different biomes, all with unique aspects to them. From the green swamplands of the Nurgle to the bloody ravaged wastelands of the Khorne, each biome is depicted in incredible detail and rendered beautifully. Just like in Total War: Warhammer and Total War: Warhammer II, the corruption mechanics also influence the visual landscape. As more of the darker factions conquer settlements on the map, the landscape’s colour will change to shades of grey and blue. The result is a stunning patchwork of colours. However, each biome also comes with faction armies and heroes that roam the map. These units, combined with the game’s hero mechanics, mean that you never know what’s lurking around the next corner. While this might be nerve-wracking to some players, I found it made gameplay more exciting. It felt like the game was engineered to spur players on and keep them exploring different biomes.

The only clumsy visual was the game’s interface. Compared the Total War: Warhammer II, the UI has been rejigged in a deep red colour, and some buttons have been moved around to unintuitive places. As a result, it’s not always easy to locate a particular button or overview. This can be frustrating when all you want to do is focus on the battle or mission at hand. The new interface may take some getting used to. In the big scheme of things, however, it’s not a deal breaker. There’s plenty to enjoy in Total War: Warhammer III.

All in all, Total War: Warhammer III is an excellent addition to the series and forms a great conclusion to the epic Warhammer trilogy. It has intriguing mechanics and gorgeous visuals, and it comes with a great variety of units, factions, and heroes, along with plenty of engaging battles. If you enjoy the Total War franchise and go in for a bit of Warhammer lore, this is an engaging experience with a lot of variety, and is not to be missed.