Just two days after Dan Houser announced he will be leaving Rockstar Games, Rod Fergusson announced on Thursday via Twitter that he will be leaving the Gears team to join Blizzard and the Diablo franchise. Fergusson has been with The Coalition, the Microsoft run studio, since 2014. He has a Gears tattoo and his Twitter handle is Gears focused (@GearsViking) so there’s no doubt that he has a lot of love for The Coalition.

Fergusson has had a long career in gaming that started back in 1996, when he began to work for Microsoft.  In July of 2005 he moved to Epic Games as executive producer and then became the director of production. It was then that he started to work on the Gears of War series. In 2005 he moved on to Irrational Games and helped in the late stages of BioShock Infinite where he was the executive vice president of development. He has been noted as saving the game and helping Irrational meet its release deadline after the game was delayed. 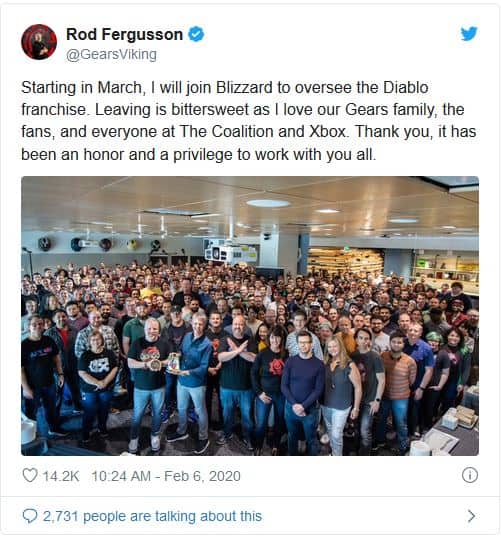 When Microsoft announced in January 2014 that they had purchased the Gears of War franchise from Epic Games, Fergusson joined the team to oversee the game’s development at The Coalition’s Vancouver base. Though Gears of War 4 played it fairly safe, sticking to the same formulas that its predecessor Gears of War: Judgement made popular, Fergusson and his team spiced things up and changed parts of the formula with Gears 5. Some of these changes included the introduction of an open world format and several multiplayer options. The fifth instalment in the series was also Microsoft’s most successful game in seven years.

As his career highlights show, he has become somewhat of a game “fixer” and it seems that his move to Blizzard is because “it’s time for a new adventure.”  It hasn’t been made clear exactly how Fergusson will fit into the Diablo team, but it seems he will not be replacing Diablo 4 director Luis Barriga. Diablo 4, the dungeon crawler RPG that was announced at BlizzCon in 2019, is still said to be nowhere near a release date. With Diablo 3 having released nearly eight years ago and fans being disappointed and underwhelmed by the Diablo: Immortal mobile game reveal, Fergusson’s March arrival may just be what Blizzard needs.