Melbourne graphic designer BossLogic gave fans a first look at brand new artwork that he’s been working on for UbiSoft. BossLogic has previously worked on poster art for Marvel’s “End Game” and “Spiderman: Far from home.”

In the live stream, which lasted over six hours, the artist started with a blank Photoshop page. In real time, I and thousands of others watched as BossLogic slowly revealed his artwork. First, he added a black figure with muscular arms in the center. Next, he worked on creating two separate panels on either side of it. The panel on the left eventually depicted a ragged and icy sea, ships slashing through sea foam. Much later BossLogic added a Viking style figurehead to these ships and also passengers who had long hair and braids. The one on the right showed a scene on land with a battle taking place. Some of the fighter are shown in Anglo-Saxon gear, equipped with cloaks, spears, swords and shields. This addition of both land and sea is obviously a reference to the franchise’s gameplay that has included both naval and land battles since 2012’s Assassin’s Creed III. 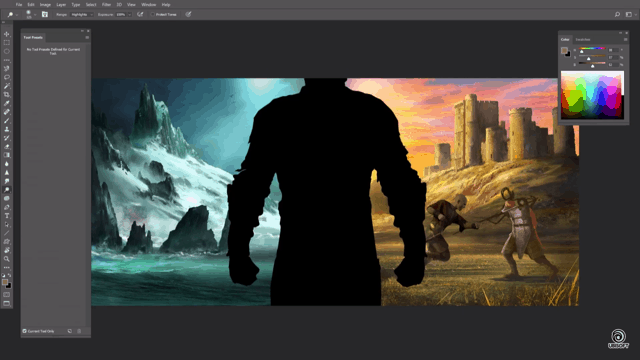 The music the accompanied the stream was also telling. Firstly, it opened with the very familiar loading screen music from 2018’s Assassin’s Creed: Odyssey. However, as BossLogic art slowly revealed more information about the game, the familiar AC soundtrack sounded less Greek and more… Nordic. Kind of if “Braveheart” and the TV show “Vikings” had a baby. Some tracks were obviously meant to accompany battle with thundering drums and male alto harmonies. On others female sopranos and lutes were heard and evoked a more peaceful, somber atmosphere.

Rumors have been circulating about the Ubisoft game since April 2019. Most have said that the game will focus on the Viking era, delving into Norse mythology as Odyssey did with Greek mythology. Now we know that to be definitely be the case.

As a massive fan of Assassin’s Creed Odyssey (it is in my top five games of all time) I was super excited to watch the live stream. I thought it was extremely creative, especially with the inability to now reveal new games via events such as E3. However, after the first hour my excitement dwindled and I became impatient. After the fifth hour, I was well and truly over it. I think it’s a bit much for Ubisoft to ask their fans to stay glued to their screen for hours to gain information on their next title.

All that being said, an official trailer will be revealed on May 1st, 1am AEST, where we expect to learn a lot more about Assassin’s Creed: Valhalla, including potentially a release date and whether or not we will see it on the next generation of consoles. Not long until we find out!