Interest rates in Animal Crossing: New Horizons have been slashed

It is not too hard to exploit the economy in Animal Crossing: New Horizons to make your millions. Whether you have been time travelling, farming arachnids, or making it big on the Stalk Market via sites like the Turnip Exchange, becoming rich in New Horizons is often a matter of when, not if. Nintendo has stepped in with its latest patch to reduce the amount of interest the player earns with deposited bells, reducing the viability of a common get-rich-quick scheme.

When you first log in after the patch, you will find a letter in your letterbox from the Bank of Nook informing that they have “reduced the interest rate offered to all savings accounts”. As an apology for the “inconvenience”, Tom Nook has offered a giant bell bag rug for your home. 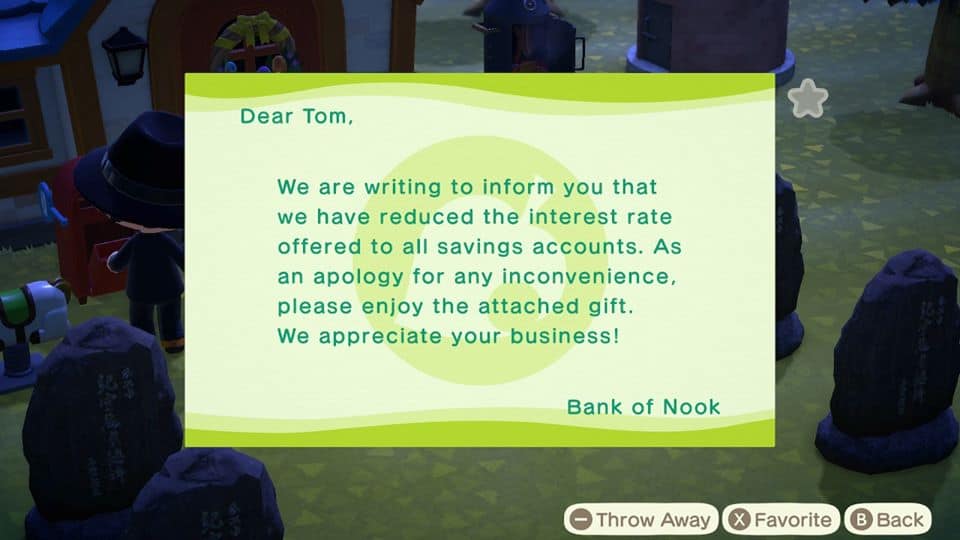 It isn’t hard to see why this was done. The interest gained by depositing bells was already pretty lucrative. Combining it with a bit of time travel and players could make a killing without lifting a finger. It isn’t known exactly how much interest has been reduced by. However, players relying on it won’t see as much of a return on their investments.

That said, if you are determined to do so, this probably won’t stop many enterprising Animal Crossing: New Horizons players. The turnip exchange has created an entirely new sub-economy online that Nintendo can’t really influence. Plus, while it can be easy to break Animal Crossing’s challenge, its nature as a non-competitive game means that these exploits aren’t really hurting anyone who chooses to abstain from them.

In other news, there are still a bunch of cool new additions in the latest patch. These include the Nature Day event, and the return of shady art dealer Crazy Redd, among other new features. Nintendo have been diligent about frequently patching Animal Crossing: New Horizons to fix bugs and tweak features.