That new Kingdom Hearts demo is more fun than it looks

When Kingdom Hearts: Melody of Memory was first announced a few months ago, I was immediately skeptical. The nearly 15 years after Kingdom Hearts 2 saw the franchise release a cavalcade of spinoff games, and playing each of them was mandatory if you wanted any hope of understanding the convoluted finale of Kingdom Hearts 3. So when I saw that the next game in the series is a rhythm action title featuring recycled graphics from older games, all I could think was “Oh no, they’re doing it again. A new cavalcade begins.”

But when I sat down to play the demo of Kingdom Hearts: Melody of Memory, my skepticism mostly – but not completely – faded. Say what you (or I) will about the games, but the music of the series (by veteran composer Yoko Shimomura) is consistently excellent across the board. After playing the demo, I’m surprised they didn’t make a music rhythm game sooner.

The game plays like a bonkers anime Guitar Hero. Your three party members are running down a giant composition track while encountering various enemies and hazards, who need to be dealt with in time with the music. I played the PS4 version, wherein X, L1 and R1 are the attack buttons. Any of these can be used to attack, but some notes require pressing 2 or 3 of them at once. Triangle lets you use cool abilities, and Circle lets you jump and glide. It felt like I was getting rewarded for tapping my knee in time with classic Kingdom Hearts tracks, which I was already doing anyway.

Each of the four songs present in the demo is available in three difficulties. The controls were fairly easy to master on Beginner and Standard, but the hardest versions (Proud Mode) frequently had me panic and try to button mash my way to victory, only to fail. Thankfully, each version of each song comes with a preview you can watch to see what a perfect run looks like. 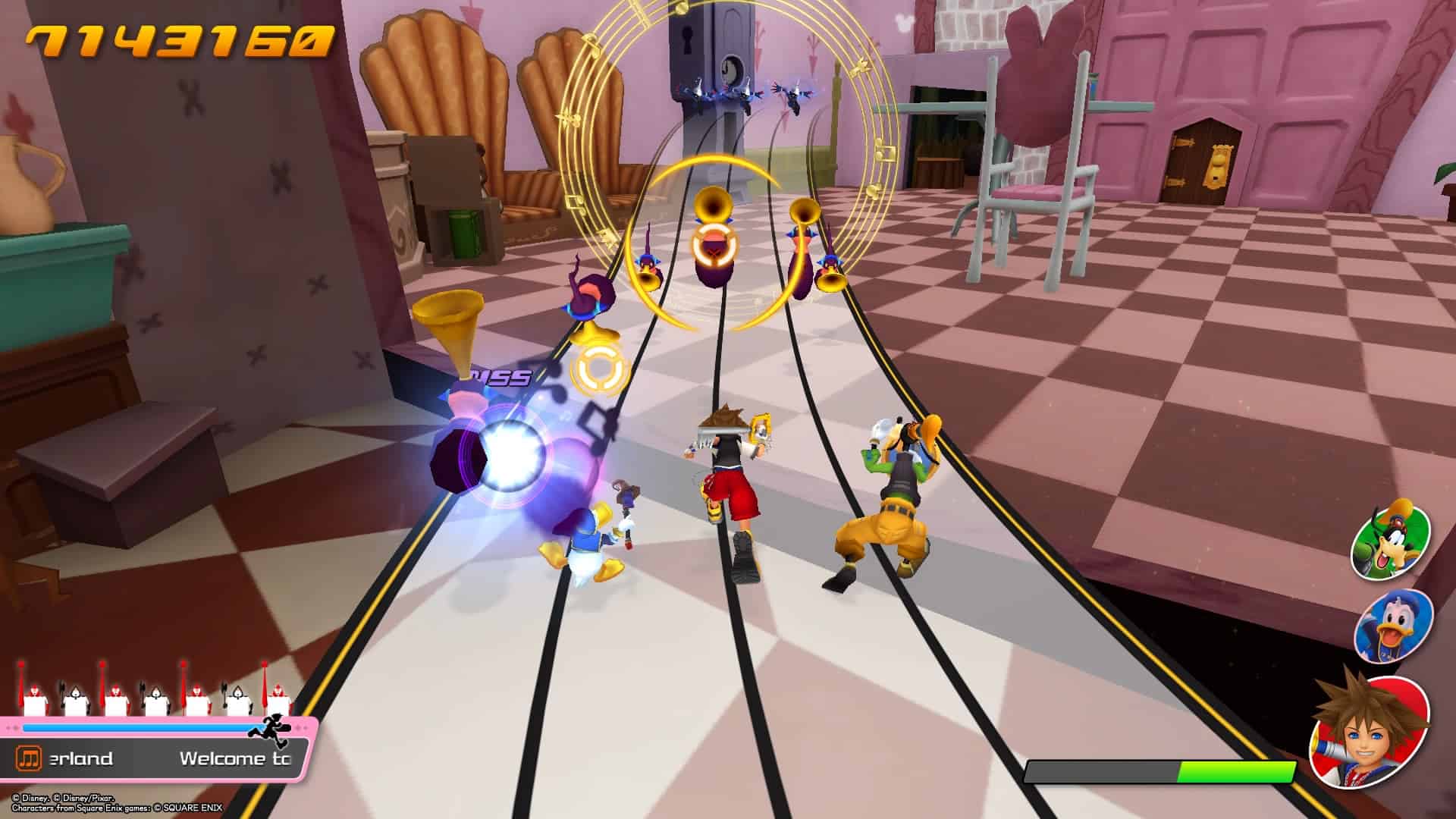 There’s a 1-handed mode that simplifies the controls even further (and 1-handed songs are scored separately from the others, so that’s six distinct playstyles of each song), and a Performance Mode which adds the Square, L2 and R2 buttons into the mix. Plus, the demo includes two other songs in a local co-op mode, which I cannot wait to try. There’s so much variety, and every song is a veritable bop, so I was left with a very good impression.

The demo doesn’t contain any plot, so who knows, maybe I’ll have something to get mad about when the final version of Kingdom Hearts: Memory of Melody comes out November 13. The game will release on PS4, Xbox One and Switch, but the demo’s blurb on the PS Store mentions availability on the PS5, so next gen consoles may also get a piece of that musical keyblade action.