Cyberpunk 2077 is by most accounts a great game… if you are playing it on a next-gen console or high-end PC that can actually run it. However, it was also released on the PS4 and Xbox One, 7-year-old consoles that are showing their age. While the User Score for the PC version on Metacritic is a respectable 6.8, on PS4 and Xbox One has plummeted to 2.8 and 3.6 respectively. Players on those consoles cite the low 720p resolution and a frame rate that often hits 15FPS. Now some gamers are reporting that Sony has taken the unusual step of allowing PS4 owners of Cyberpunk 2077 no-questions-asked refunds due to the poor performance.

According to some Cyberpunk 2077 players on Reddit, they were able to be granted refunds due to their poor experience with the game. Some were able to access refunds after playing for as long as 10 hours. Not all who requested the refunds were granted them, however; Sony seems to be offering them on a case-by-case basis. It is still remarkable, as compared to Steam and Microsoft, Sony has a very restrictive returns policy, and only allows these no-questions-asked refunds in truly dire situations. 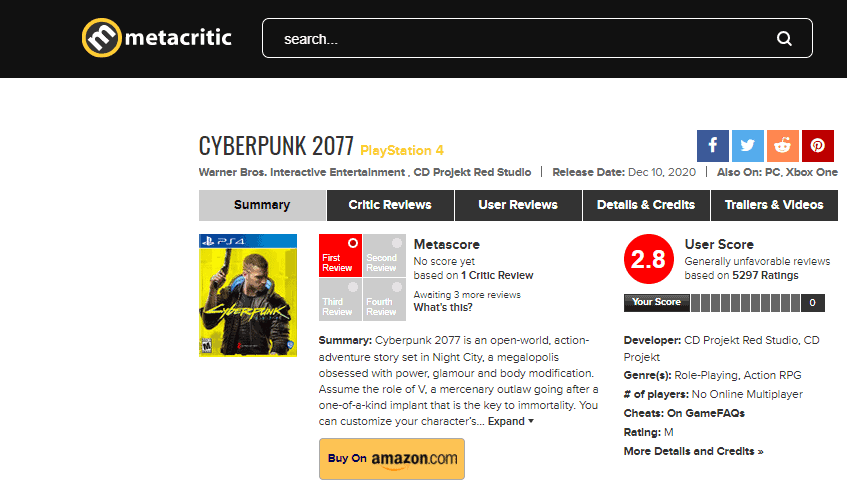 According to these players, Sony has issued a business complaint to Cyberpunk 2077 developer CD Projekt Red. No doubt the console manufacturer is not pleased that such a high-profile game is so poorly optimised for their platform. It seems odd that, despite both Sony and Microsoft offering upgraded models of the PS4 and Xbox One, Cyberpunk 2077 was not made exclusive to those more powerful platforms. Although the install base of the PS4 and Xbox One is obviously a lot higher, it seems more trouble than its worth to get the game to run on underpowered hardware.

Sony is yet to make a public announcement on refund eligibility. However, displeased PS4 players are encouraged to reach out and discuss the matter with a Sony representative. Sony has gotten into trouble with the ACCC in the past for refusing to refund displeased Aussie customers. They will no doubt try and stay on the right side of the law this time and respect customers’ rights to a refund.