Overnight, Facebook Connect took place, with Mark Zuckerberg announcing several developments, not only for Facebook as a whole, but in the VR space in particular.

First, we know that Facebook’s umbrella company is changing its name to Meta. They’ve spoken many times about the Metaverse and what that might look like, so this change isn’t super surprising, with their brands beneath it (Facebook, Instagram, WhatsApp etc) remaining the same.

More interesting perhaps is the developments in the VR space. The “Oculus” branding is being changed, being replaced by “Meta” – that means that the Oculus Quest 2, for example, will become the Meta Quest 2. CTO Andrew Bosworth noted “Starting in early 2022, you’ll start to see the shift from Oculus Quest from Facebook to Meta Quest and Oculus App to Meta Quest App over time. We all have a strong attachment to the Oculus brand, and this was a very difficult decision to make. While we’re changing the brand of the hardware, Oculus will continue to be a core part of our DNA and will live on in things like software and developer tools.”

Additionally, Zuckerberg noted that you will no longer need a Facebook account to use Oculus hardware. This was certainly a sore point previously, with some folk who don’t use Facebook stating that they would never bother with an Oculus headset because of the requirement. Soon, that won’t be an issue.

“As we’ve focused more on work, and frankly as we’ve heard your feedback more broadly, we’re working on making it so you can login into Quest with an account other than your personal Facebook account. We’re starting to test support for work accounts soon, and we’re working on making a broader shift here, within the next year. I know this is a big deal for a lot of people. Not everyone wants their social media profile linked to all these other experiences and I get that, especially as the metaverse expands.” said Zuckerberg.

Meta also revealed a “high end” VR headset codenamed Project Cambria, which will launch in 2022. This isn’t going to be a “Quest Pro” or a “Quest 3” however; it’sb being described it a a new product line separate to the Quest line – “a completely new advanced and high end product” which will be “at the higher end of the price spectrum”. It’s said to include eye tracking and face tracking to drive avatars in social VR, with high resolution colour passthrough for compelling mixed reality experiences (which means it’ll include some AR components as well). 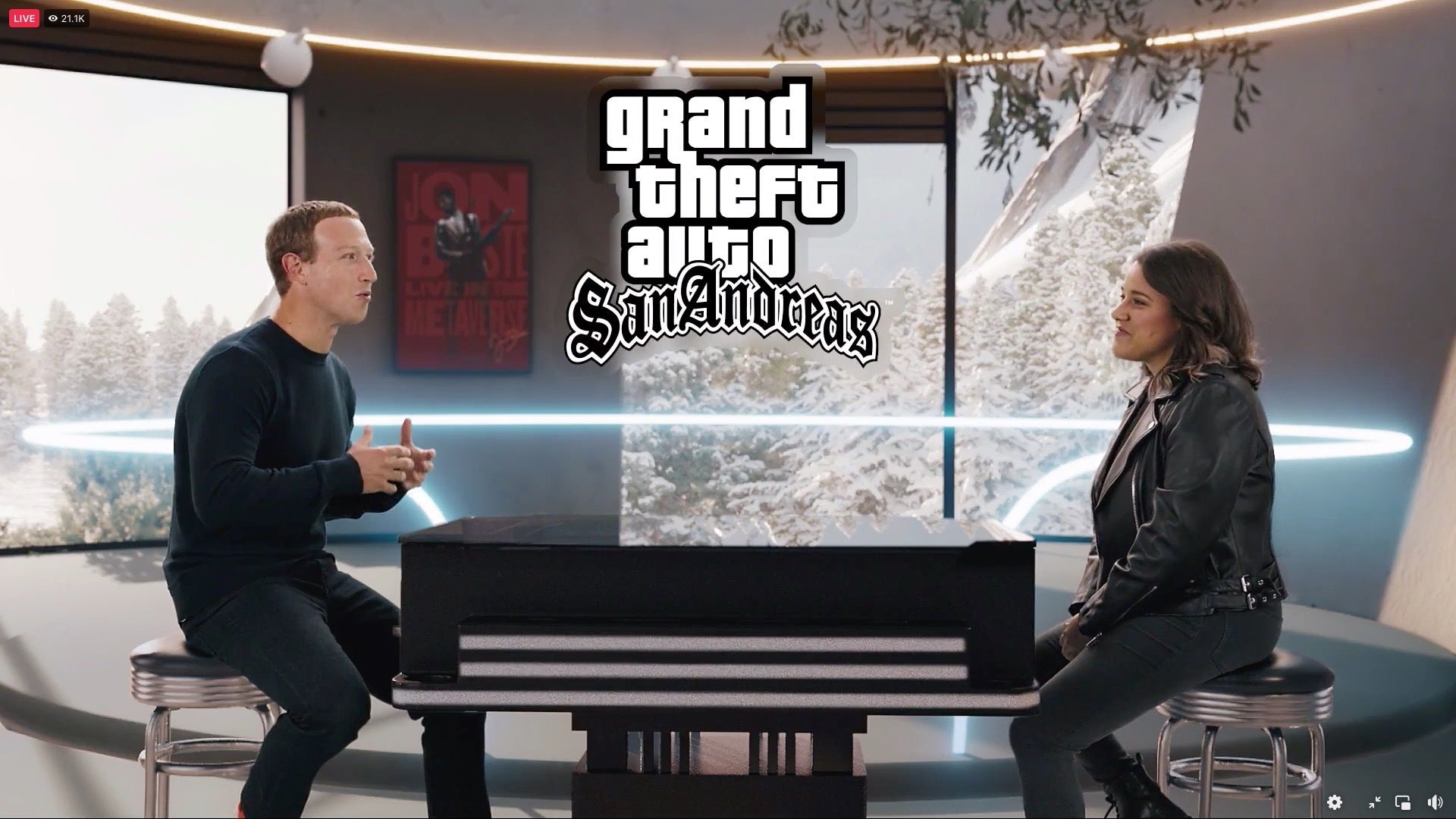 The last big announcement worth noting is that Grand Theft Auto: San Andreas will be coming to Oculus Quest 2. After Resident Evil 4 VR was just released recently with a successful update to Oculus Quest 2, the idea of exploring San Andreas in VR is a pretty exciting prospect. The project has apparently been many years in the making, and while we don’t have a release date yet or any footage, this is another big hitter set to launch exclusively on the Quest 2. GTA is certainly getting a resurgence, with the remastered trilogy launching soon across all major platforms.

There were some other game announcements and information on the Metaverse during the long presentation, so feel free to watch it above. With lots of tantalising VR news, 2022 is going to be an interesting year for virtual reality fans to say the least.