Sniper Elite 5 launches today, and to celebrate, you can call up a special hotline to potentially win a copy of the game on the console of your choice.

Simply call 1800 ELITE5 (1800 354 835) between 8am and 8pm on Thursday 26th and Friday 27th May, follow the prompts and you’ll be granted a special code that can be redeemed for a copy of Sniper Elite 5. There are 100 copies of the game scattered throughout Australia so you’ll have to call in quickly as those 100 copies are only available for collection until Monday 30th May.

Sniper Elite 5 features a new campaign is set in France in 1944, centered around the events of D-Day. “Elite marksman Karl Fairburne uncovers a Nazi plot called Operation Kraken that could turn the tide of the war back in their favour. Working in the shadows behind enemy lines, Karl must use all the skills at his disposal to destroy Operation Kraken and the mastermind behind it: Abelard Möller.” 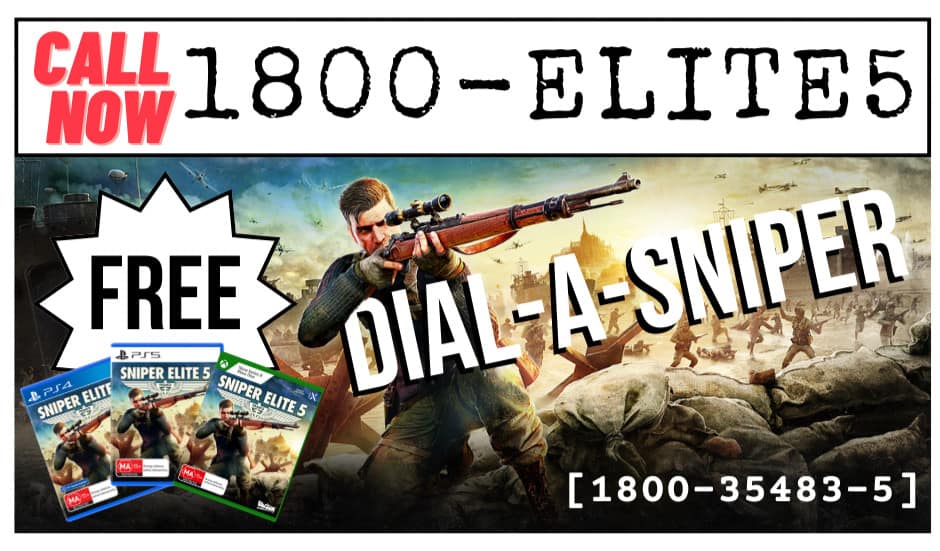 “The new Sniper Elite 5 introduces the idea of Invasion Hotlines – phones found in-game which can be used to help locate the enemy – and we thought ‘what better way to bring this game to life in the real world than to manifest the hotlines themselves!” says managing director and chief head-hunter at Five Star Games, Darren MacBeth. “The Sniper Elite franchise sells extremely well in Australia and we’re stoked to have EB Games join the fray with us to help confirm what we already knew: This is the best entry to the Sniper Elite series yet.”

Five Star Games are getting a bit of a reputation for wacky PR stunts, with previous examples including the world’s most expensive ramen for Yakuza, and a 10-tonne tractor turned into a massive controller for Farming Simulator 2022. What will they think of next?

Sniper Elite 5 launches physically today for PS5, Xbox Series X, PS4 and Xbox One, and is available digitally on PC. It’s also available as part of Xbox Game Pass. We’ll have our full review on the site soon!