Update: Project Director Mike Gamble replied to a tweet stating that the item description “was a mistake”. And replying to another tweet in the same thread that the original item description was written by the store team who “aren’t familiar with the game”. Whether or not fans will read between the lines or not, well… that’s up to them.

Original Story: Last year during N7 Day, it was reported that there’s a new Mass Effect game in the works from BioWare. Now, there’s some more information regarding the teaser image, and it all comes from the BioWare store. Recently, they put up an item of the teaser image in lithograph form. And it’s yours, from the low price of $45USD (roughly $64.57AUD). Of course, why would there be an article about a poster you can buy? Well… it seems like BioWare released some new information with the product description that was recently chopped. Could be spoilers, or could be a mistake. Who knows. 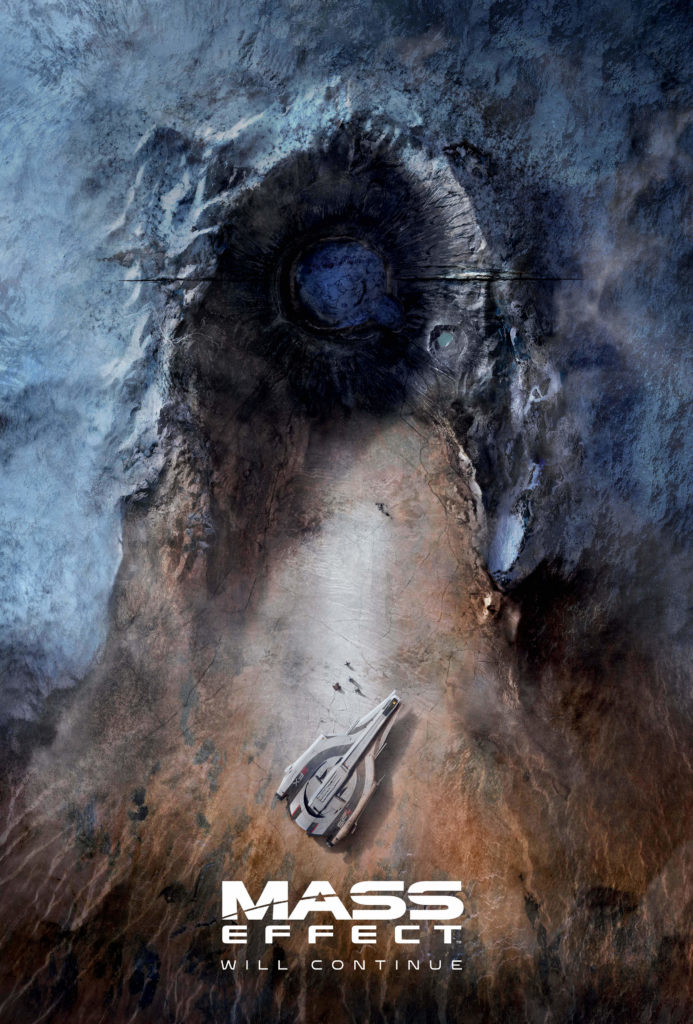 The item’s previous description first mentions “Shepard’s final quest may have ended the threat of the Reapers but at great cost including Earth itself”. The first sentence mentions the mission Priority: Earth, where allied forces have come to Earth to stop the assault of the Reapers. This was your final mission as Commander Shepard, and it could also hint at a Destroy ending. However, the item description didn’t stop there. The description goes on to say that while “Shepard and the survivors are left to pick up the pieces, fans are left wondering what’s next”. Does this mean that in the new Mass Effect series, players will be able to play as Commander Shepard? Or… is this hinting at the end of Mass Effect 3 where Shepard (depending on your choices) is alive.

The lithograph’s current description removes all traces of Shepard’s name. Whether that means that Shepard is actually in the game, or it was a mistake, who’s to say. The current description reads that “the threat of the Reapers might have been ended, but at great cost including Earth itself. While the survivors are left to pick up the pieces, fans are left wondering what’s next”. It’s interesting and telling that the original paragraph has a different tone than the current one. Who’s to know why they changed it. The next paragraph mentions how BioWare revealed the poster on N7 Day last year, including the fact that there are many theories revolving around it too.

The last paragraph hasn’t changed from the original description. In it, they mention that a “Krogan and its 4-member team walk towards a Geth-shaped crater with a ship that resembles the Normandy with SFX emblazoned on either side”. Having a physical version might reveal the surprises that BioWare’s GM Gary McKay wants out there.

While there is no archive of the original description, YouTuber MrHulthen has posted a video about the lithograph with the original description shown. It’s also interesting that they’ve removed Shepard’s name, but mention how the Krogan has a team of four. Does that mean that they count the Krogan towards the group of four? Or is it a group of five in total with Shepard being the fifth person in the crew? There’s also the line that something happened to Earth. Does this mean Earth is gone? Does that mean something happened to Earth after the Reapers? Most of the teasers have alluded to a Destroy ending, because if there’s the Synthesis ending, Liara would’ve had green eyes and a green face.

A lot of this leads to a lot more confusion if we take the item description at face value. And that they’re also pointing out the Krogan, does this mean Wrex is still hanging around whenever the next Mass Effect game takes place? Or is it Grunt if he completes his Rite of Passage? This will sure to make fans of Mass Effect speculate immensely on what is going on within the image, and if the mentions of Shepard are true. We’ll find out closer to its release date. What do you think about this? Do you think you’ll play as Commander Shepard again? Or do you want their story to be over? Check out our review of Mass Effect: Legendary Edition.