Taiko no Tatsujin: Drum ‘n’ Fun! Review – Love it or beat it

Taiko no Tatsujin will be more familiar to fans who have been to a Japanese arcade, where the rhythm genre is still going strong. Well suited to an arcade, the original debuted back in 2001, never seeing a release in the West… until now. With Taiko no Tatsujin: Dum ‘n’ Fun for Nintendo Switch and the simultaneous release of Taiko no Tatsujin: Drum Session for PS4, you can now beat the drums to your heart’s delight. This review is for the Switch version.

In Taiko no Tatsujin, it’s all about hitting the centre or the rim of the drum in time with the music. There are a range of tracks and difficulties that get more frantic the faster you go. It’s a simple but addictive premise, and while there are only two “types” of notes, additional curveballs like drumming with both hands at once, freestyle and more keep you on your toes. It’s classic rhythm action but it works perfectly well and proves why it has sustained the franchise for 17 years.

There are multiple ways to control the game on Switch as well, which is handy considering you’re not always going to want to be moving your arms like a mad drummer in your living room. That is the most fun way to play, though, and the most authentic. Basically using the Joy-Cons with their HD rumble technology, you imagine a drum in front of you and hit away. If you’re more reserved, you can opt for button presses (which are a bit easier and more precise than the motion controls of course), or even using the touch-screen drum in handheld mode. (These other options also mean you won’t look as ridiculous on public transport).

You can also invest in the proper Drum controller, but we didn’t test that out ourselves; we imagine it’s the best way to play if you have the extra cash lying around and the space for another peripheral in your collection. 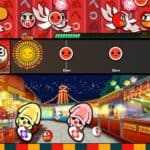 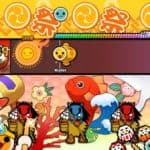 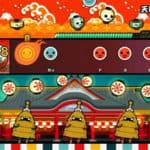 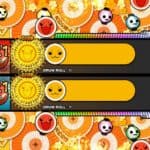 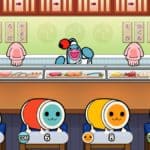 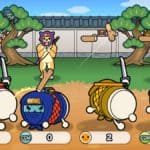 The screen in Taiko no Tatsujin colourfully and quite wonderfully fills up as you progress in each song, complete with zany Japanese dancing characters and chaos that all pumps along to the rhythm. Performance mode is where you’ll spend most of your time, choosing one of the 74 songs and trying out each difficulty either in solo play or multiplayer. The tracks are mostly going to be unfamiliar to you unless you’re big on J-Pop, but the familiarity of the songs didn’t feel that important to me. They’re good, upbeat tunes with a catchy sound, recognisable or not.

The other main mode is Party Mode, which reminded me of Rhythm Paradise in a big way, and even the recent Super Mario Party Sound Stage area. They are a bunch of cute rhythm-based mini-games that include chopping wood, raising coloured flags, serving sushi and more. It’s a fun distraction and good to bring out at parties with your friends, but it won’t change your life.

In a cute Nintendo twist, there are specific characters and songs that you’ll only find in this version. A Splatoon Squid or Kirby can be selected, and there are songs from those games along with Jump Up Superstar from Super Mario Odyssey. They aren’t essential additions but they do make Drum ‘n’ Fun! feel a bit more unique and are nice touches that I appreciated as a fan of each franchise.

There’s not much more to Taiko no Tatsujin: Drum ‘n’ Fun!, but the core concept is definitely enjoyable enough if you’re a fan of the genre. I would have liked to see more game modes perhaps, but this is as close to the arcade you’re going to get so in that sense it matches the experience but in the comfort of your own home.

The Joy-Con controls also sometimes didn’t seem as responsive to the game as I would have liked. Sometimes I shook them but it didn’t register as a hit, causing me to miss a note and lose my chain, which I found frustrating. That’s a pretty minor gripe though as it certainly doesn’t penalise you for missing notes that drastically, but perfectionists may prefer the button pressing (or the drum controller).

Taiko no Tatsujin: Drum ‘n’ Fun lives up to its name. It’s certainly a good time and clearly comes from a long-standing background of being one of the go-to rhythm games in arcades overseas. It’s fantastic to finally be able to play it over here, and the portability of the Switch makes it a good distraction to be played on the move. I do wish it had more things to do, but this is still good ol’ arcade fun presented in its purest form and a must-have for fans of this quirky and endearing genre.