Snack World: The Dungeon Crawl Gold Review – A snack worth indulging in

The Nintendo Switch is no stranger to ports from other consoles, particularly the 3DS, the newest of which being Snack World: The Dungeon Crawl – Gold. Let’s take a bite out of this snack and see if it is worth the extra calorie intake.

The Snack World: Trejarers was released for the 3DS in 2017 and later ported to the Switch in 2018, both exclusively in Japan. The “Dungeon Crawl – Gold” edition has been localised for Western audiences as, so this is the first time many of us will have a chance to play it. It’s worth noting as well that Snack World is a very popular anime franchise over in Japan as well, even though this might be the first time you’ve heard of it.

The game is an action-RPG with an anime art direction that leans heavily on being cute and full of bright colours, a stark contrast to the recent trend of RPG’s that tend to be quite dark in tone, story, and overall aesthetic, such as Oninaki or The Caligula Effect: Overdose.

This is something that at first glance might make the title seem overly childish, but it is by no means aimed solely at children as the mechanics and self-aware dialogue are clearly meant for an older audience.

Before you start the game you are treated to a fun intro that features an anime style opening complete with an upbeat song centred around pork chops, which may sound ridiculous, but in context with the rest of the game, it works quite well. The song is also a complete banger that I enjoyed way more than I should have, check it out in the below video.

After this intro sequence, you are then directed to a fairly standard character creation menu, choosing your sex, face shape, eyes, hairstyle, height etc. I found the choice varied enough to find a style that I was happy with, and if you are familiar with the usual look of Anime characters than you already know what to expect from the selections.

The story centres around the kingdom of Tutti-Frutti, that is at war with the evil Sultan Vinegar. You are a wounded adventurer left at the gates to be taken in by the King under request from his daughter. Here is where you get the first taste of the fantastic dialogue and honestly hilarious writing.

The King initially responds by saying that the kingdom is in no peril and as such doesn’t require any form of hero, so he instructs the guards to “just leave him there”, a clear nod to the trope of the hero arriving with impeccable timing to a kingdom in desperate need of a saviour.

The writing continues to be witty and charming over the course of the game with many fourth wall breaking moments, including one character telling another character off for breaking player immersion by discussing how to perform a particular gameplay mechanic.

Speaking of the characters, I found myself growing quite fond of most of them thanks to the cleverly written dialogue that remains tongue-in-cheek and humorous, and I genuinely got excited when there was a conversation as I never knew what the cast would say next.

A personal favourite character of mine was Ciderfella, who at first glance seems to be a sweet and innocent woman charged with training you initially, however she swiftly turns into a military-style commander and her interactions with the other characters made me laugh quite a bit. This includes one section where she just pulls out a minigun and starts firing randomly whilst yelling.

The combat gameplay in this title is nothing revolutionary, but is still quite satisfying and takes place in real-time, with your player being able to perform a basic attack, a strong attack and a special attack (which requires a meter to build up), along with blocking and dodge-rolling. The unique aspect of this is that each weapon has an energy meter and after constant use will deplete, which forces you to switch to another weapon to continue attacking.

You can have up to 6 weapons (including shields) equipped at any time, which are called “Jara’s” in this title and are able to be switched between on the fly. This encourages you to constantly change weapons during combat and for me was an interesting concept as I normally stick to one weapon that I have a preference for when I play an RPG.

The general loop of this title involves taking up quests, going to a particular area to defeat enemies and final level bosses and/or completing the required parameters, opening chests for loot and crafting components, then proceeding back to town to fiddle with your load-out and equip better gear before setting out on your next quest.

Another system that you are provided with early on is the ability to equip ‘Snacks’, which essentially act like NPC party members that provide assistance in battle along with various other buffs like healing and increased stats. These creatures are all quite cute and unique in design, so I had some fun with finding new ones to take with me on my adventures.

Speaking of character design, the enemies in this title are all quite varied and range from caricature lions to ghosts, to bats and anything in between. It was a joy to encounter new types of enemies and some of the bosses, whilst easy to defeat, had some unique design choices that I enjoyed.

There are online components in this game including setting up a persona, complete with details about yourself that you select from pre-determined choices, along with a multiplayer feature to raid with other players. As this was an advanced copy I was unable to test these features out though, so I cannot comment on them at the time of writing. 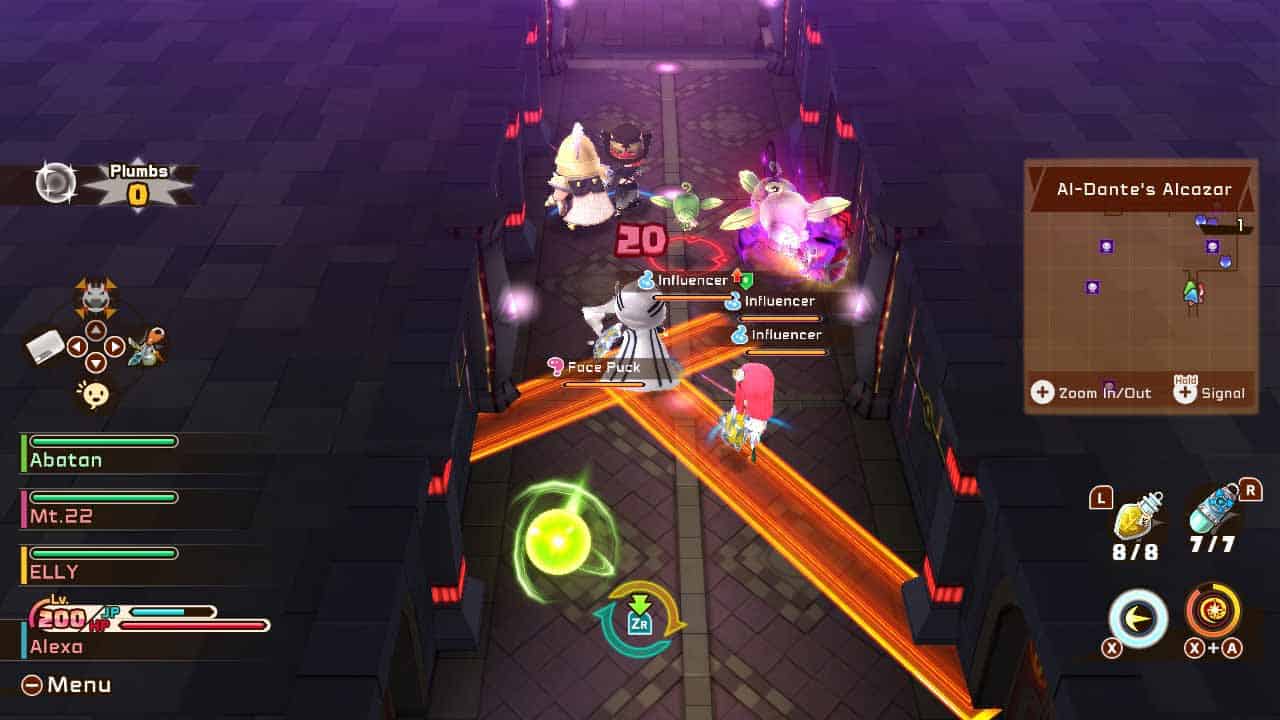 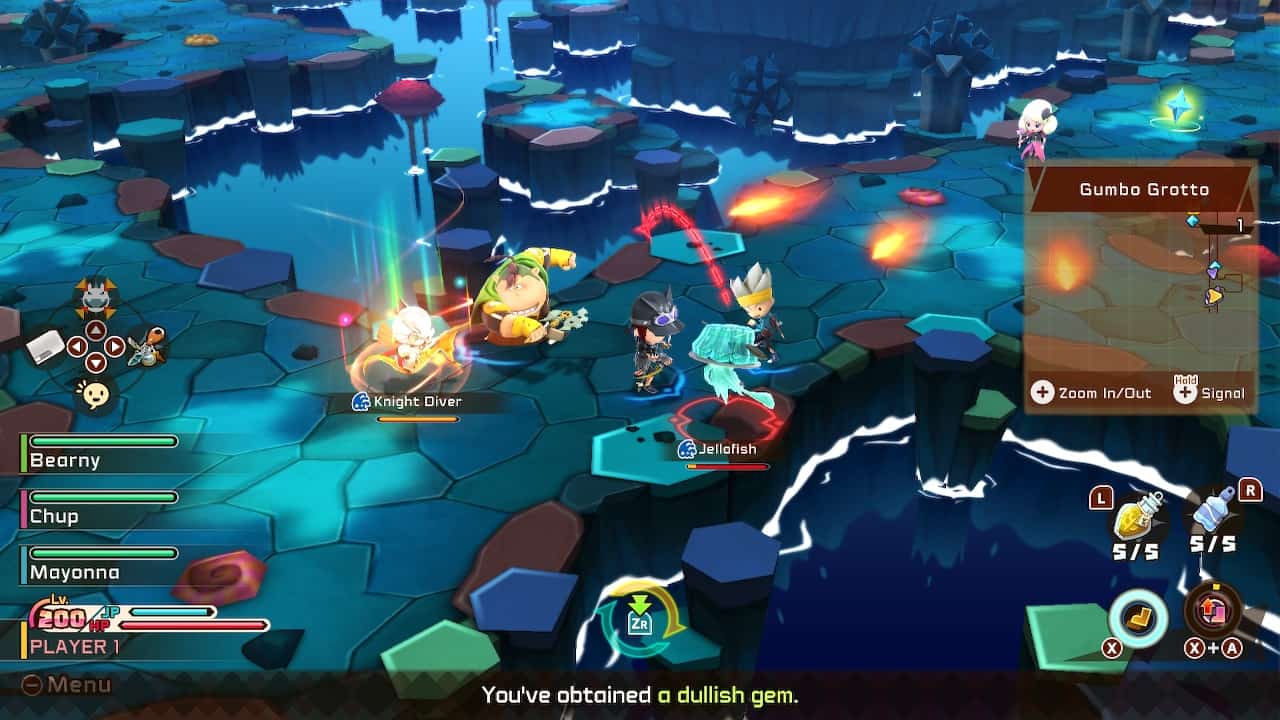 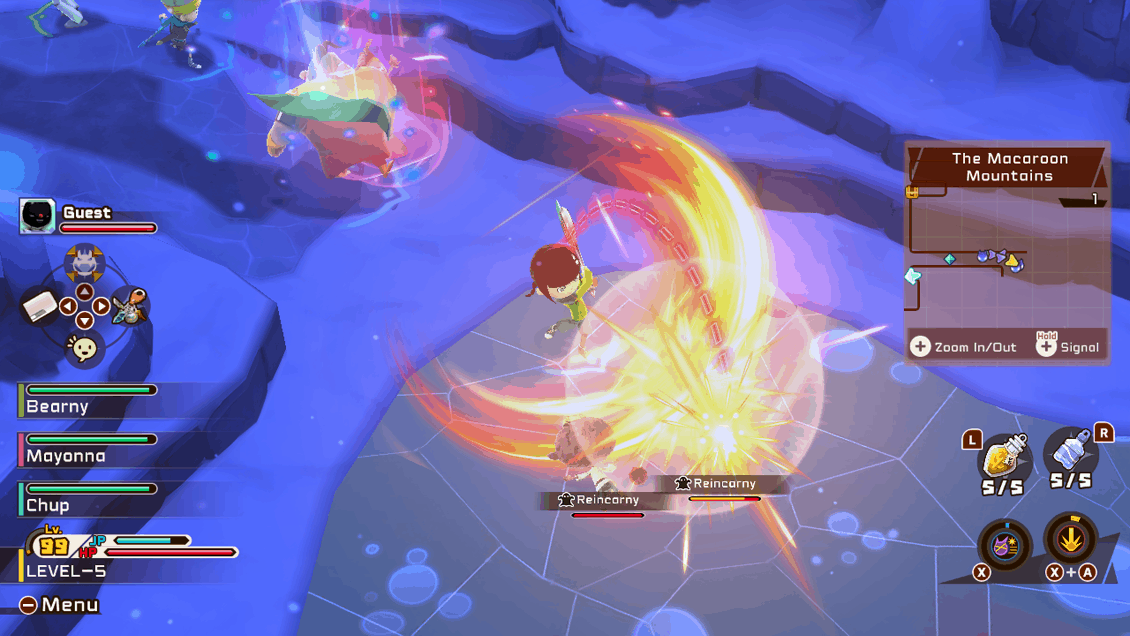 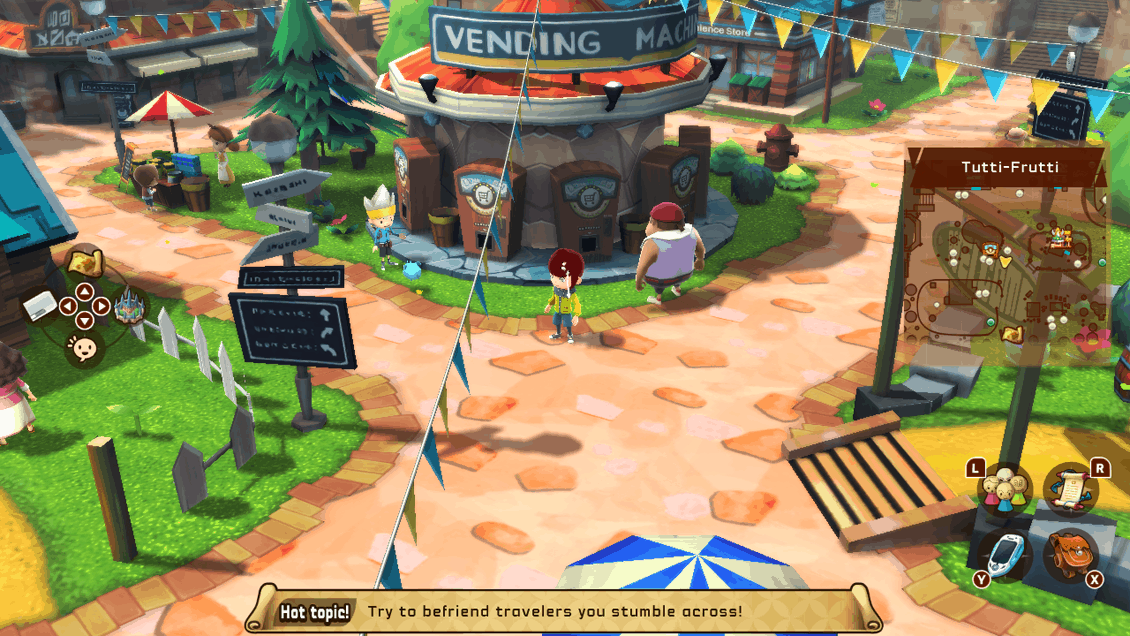 There are also a few mechanics in Snack World: The Dungeon Crawl – Gold that I found to be a welcome addition, including having the ability to instantly teleport to any of the stores in town at the tap of a button, being able to activate your quests whilst in town and start them straight away, along with being able to set your gear that will alter your attributes, but at the same time being able to select a different set that is purely for visual purposes should you not like the way the gear with better stats looks.

One thing that I did find annoying was the little soundbites that each character would rattle off during conversations and gameplay, they were cute at first but quickly became repetitive and distracting after lengthy play sessions.

This is a title that is best played in short sessions, and with the overall design works quite well in this regard. This makes sense given its original release on the 3DS. I often found myself playing for an hour or two before setting it down to do something else, but always found myself coming back to it for another short session during my course with this title.

Snack World: The Dungeon Crawl — Gold proves to be a fun and entertaining adventure with plenty of care put into the writing and gameplay. I would strongly recommend this title to any RPG fans as it provides something a little different to the usual range of “too serious” RPG stories and has no issue with poking fun at the tropes often seen in other franchises. The gameplay and combat are simple yet intricate enough to keep you wanting more, and the grind for better loot at the end of quests is satisfying. If you are put off by overly cute and cheerful characters and game design, then this title may not be for you, but anyone in search of a fun RPG for the Switch should walk away happy with their purchase.