Kingdom Hearts: Melody of Memory is a musical romp set across the Disney-inspired universe of the Kingdom Hearts franchise. It’s a rhythm action game, reminiscent of titles like Guitar Hero or Beat Saber. Gameplay involves smacking monsters and dodging obstacles to the beat of the music. It serves as a recap of every game in the series until now, told through its excellent soundtracks. And if that sounds like this is a filler game that fans can skip, it’s not. This is also the canonical sequel to Kingdom Hearts 3, and sets the table for the next big entry in the series.

Melody of Memory is designed to mimic the action-RPG gameplay from prior Kingdom Hearts games. During most songs, your chosen party of 3 characters runs along a track, and enemies will slide towards them at various speeds. Each enemy represents a specific note. There’s three attack buttons – pressing any of them at the right moment will land a hit, and sometimes enemies will appear in groups, requiring you to press 2 or 3 of them at once. Sometimes symbols appear requiring you to jump, glide, or cast a spell in time with the music. I had a great time bopping Heartless in time to the music.

There are two other types of songs that appear less often. Memory Dives work similarly to regular songs, but instead of enemies, you get standard musical notes to hit, and instead of a proper level, the background consists of a montage of scenes from prior games. I found Memory Dives to be less interesting than regular songs, but they do provide a respite from fighting monsters if you need one.

Boss Battles are the final type of song, and they are probably my favourite kind. They function similarly to a Memory Dive in terms of gameplay, but in the background your chosen party reenacts a classic Kingdom Hearts boss fight. How successful you are at hitting the notes in time dictates how successfully your party will attack the boss, or dodge their attacks. Boss Battles are easily the most impressive parts of Melody of Memory. They are an incredible way to relive climatic moments from the series. It’s a shame that there’s only four of them in the whole game.

Each song is separated into three difficulties: Beginner, Standard and Proud. Difficulty affects not just the quantity of notes you need to hit, but which specific rhythms you will be focusing on. It feels like each song comes in three wildly different flavours. Apart from difficulty, each difficulty on each song also has a Challenge Rating from 1-15, which is a more accurate descriptor of how tough it is. A Standard song may be rated 10, while a Proud song could be rated as low as 8.

My personal sweet spots were songs rated 11-12, which were reasonably challenging but still fun. I am not a fan of songs rated 14-15, which require more physical dexterity than my fingers could manage. One particular song required me to hit 15 enemies in the span of something like 3 seconds, each hit needing to be in time with the music, and I just couldn’t. Plus, certain songs abruptly change time signatures without warning, which is beautiful when you’re just listening to the music, but seems unfair when you’re playing a rhythm action game. For players looking for difficulty, there’s plenty of it here, but be careful not to give yourself an RSI in the process.

I played the demo a few weeks ago, which only contained the game’s Track Selection mode: a list with a handful of songs you could play on your chosen difficulty. Track Selection still works how I described it in my preview. I assumed that would be what the whole game would be like. Instead, the game encourages you to start playing with World Tour mode.

World Tour is the main campaign, which takes the form of the beloved world select map from Kingdom Hearts 2. You control a tiny Gummi Ship flying between tiny planets based on specific worlds from prior games. Each planet has 1-2 songs to play, and each song contains 3 optional Missions to complete. A Mission could involve clearing the song on a specific difficulty, or getting above a certain score. Completing each mission gives you a star, and certain amounts of stars are required to open up gates to other planets. Clearing a song in World Tour unlocks it in Track Selection, letting you play it at your leisure.

The game also contains an Online mode – which lets you compete for a high score against other players (and also throw hazards onto their track, like invisible enemies, or disabled timing circles) – and a split screen co-op mode, letting you take on songs together with a friend. If you ever feel like playing a quick song but can’t decide which, there are songs marked “Today’s Tunes” which change every day, and give you extra Rhythm Points (a persistent score across all modes that gives you items or collectibles with every milestone). There is so much variety on offer in Kingdom Hearts: Melody of Memory, that you’ll have a lot to do even once you’re done with the hefty World Tour.

The variety I didn’t enjoy is in the game’s crafting system. At the end of each song you will collect crafting ingredients you can use to make useable items (that can prevent you from failing a song once, or summon Mickey Mouse to fight alongside you as a fourth party member, etc), collectible cards (featuring scenes from previous games), or even new songs to play in Track Selection. While items are helpful if you want some extra help tackling tough songs, I found crafting to be mostly tedious busywork. I am currently unable to unlock two songs because I do not have enough Lucid Gems, and I do not know which of the game’s 100+ songs have a chance of dropping them. Songs should be played repeatedly if they’re fun to play, but Melody of Memory wants you to grind them for loot.

As someone who played the PS2 Kingdom Hearts games many times over, I was impressed by the attention to detail in the graphics. Scrolling along the background of each song is the original world that song played in, be it the halls of Beast’s Castle or the twisting gardens of Wonderland. In the original games, each world took the form of multiple rooms with loading screens between them. In Melody of Memory, those rooms are now stitched together into one single-loading map. The rooms have been rearranged and stretched out, so that even though you’re seeing the same assets, it’s still a new experience. I was initially disappointed to see Memory of Melody reuse the same PS2 and PSP era graphics from the original games, especially since Kingdom Hearts 3 looked spectacular in Unreal 4. I’m still disappointed about it, but I’m pleased to see the graphics recycled in creative ways.

Virtually every Disney world from every Kingdom Hearts game is on offer in Melody of Memory (with the notable exception of the Pirates of the Caribbean films, which personally doesn’t bother me). But playing through these worlds shines a light on how the notalgia trip of Melody of Memory isn’t as successful as it thinks. I had a blast at the start of World Tour, revisiting the worlds of Kingdom Hearts 1 and 2, flying through levels I knew and loved. But the further along the series I travelled, those returns kept diminishing. Games like Kingdom Hearts: 358/2 Days, or Kingdom Hearts: Dream Drop Distance still contain great music, but playing through them wasn’t nearly as fun because I didn’t enjoy those games. Due to the older graphics engine, every song from Kingdom Hearts 3 is a Memory Dive, which is a bit of a whimper to end World Tour on. Until, that is, you get to the final level. 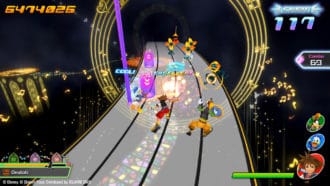 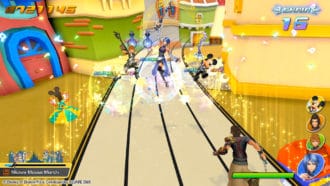 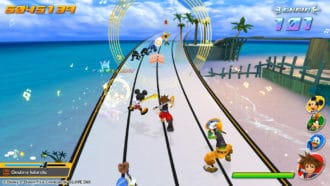 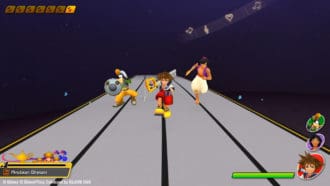 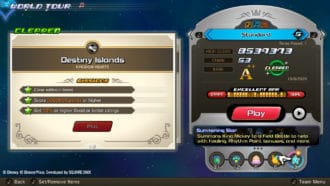 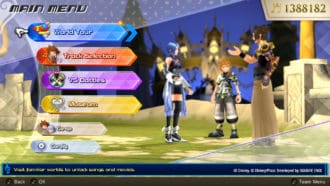 If you haven’t noticed, I haven’t mentioned the story yet. That’s because, apart from occasional plot summaries of whichever game you’re currently revisiting, there’s no story in Kingdom Hearts: Melody of Memory until the very end of World Tour. That one level contains all the original story of this game, taking place after the events of Kingdom Hearts 3’s Re:Mind DLC from earlier this year. I won’t spoil anything, but in classic Kingdom Hearts fashion there’s lots of slow, laborious conversations that set up multiple big mysteries, plans for character development, and contain obnoxious references to the number 4, implying the next major entry in the franchise may be closer than we think. But considering the series’ track record, maybe it’s best not to hold our breath.

Kingdom Hearts: Melody of Memory is a great time, even if you’ve never played the previous games. It was a smart choice to base an entire game around the series’ music, and sweeping the plot to a corner. Considering how bloated and convoluted these games often feel, Melody of Memory is hopefully the beginning of a new trend for the series. Even if the music isn’t nostalgic for you, there’s a lot of fun to be had thwacking monsters to a catchy rhythm. Kingdom Hearts loves to experiment with gameplay when it comes to its spinoffs, and it looks like this experiment was a success.