Super Mario 3D World + Bowser’s Fury continues Nintendo’s long-running strategy of shepherding all of their Wii U classics onto the far more popular Nintendo Switch. The latest title repackages the 2013 platformer for the hybrid console, along with bundling a whole new exclusive game mode. Bringing along some mechanical and presentation tweaks for returning players, hopefully this game will finally reach a broader audience. The end result is a fantastic and diverse platformer, with a compelling and enjoyable new game to try out as well.

A warp pipe from the past

The base game of Super Mario 3D World plays kind of like a mix between a standard 2D Mario platformer, and one of the 3D games, such as Super Mario 64. After Bowser captures 8 magical fairies, Mario (or one of the various other playable characters) and up to 3 other friends travel to the Sprixie Kingdom to stop him. Players must navigate across linear 3D levels and reach the flag across various themed worlds.

“The levels (with a handful of exceptions) have a tough but fair difficulty level, with a wide array of challenges.”

As someone who missed out on the game the first time around, I found it utterly charming. From its vibrant and diverse art direction to its jazzy soundtrack, the presentation had me hooked. The levels (with a handful of exceptions) have a tough but fair difficulty level, with a wide array of challenges. Some levels will have you surfing down a river on a dinosaur, whereas others might see you zooming across a snowfield on a giant ice skate.

Even the obligatory Castle levels at the end of each world feel refreshing and innovative compared to the standard template in other Mario platformers. Furthermore, each playable character has slightly different movement physics and abilities, which makes replaying levels as different characters surprisingly engaging. 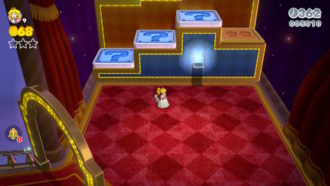 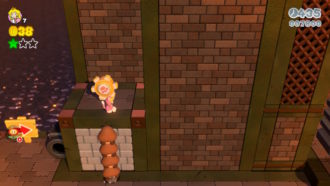 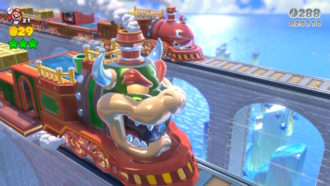 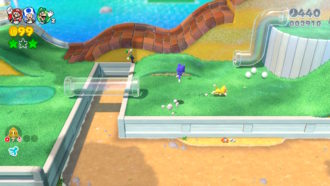 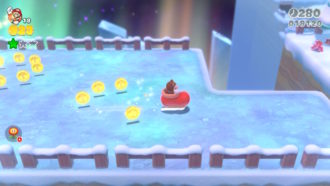 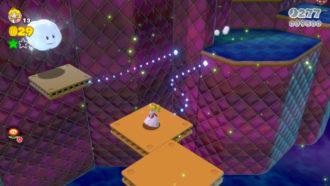 That said, if you played Super Mario 3D World on the Wii U, there may not be much to entertain returning players. Unlike New Super Mario Bros. U Deluxe, there are no new characters or levels in this port. Some user interface elements have been tweaked, and the game overall looks nicer and runs better, but its more of a straight port than a remaster. Some of the old Wii U GamePad mechanics have been altered, remapping some of them to the Switch’s touch screen.

The only new feature in the base game worth mentioning is how stickers are now used; originally, players earned stickers in levels, which could be used in Miiverse posts that players could make during the game. Now that the Miiverse is no longer a thing, the stickers can be implemented in the game’s surprisingly robust photo mode. At the press of a button, players can take screenshots, changing filters and camera angles and dotting your sticker collection across the landscape. I found this feature to be a cool bonus, and will give some creative players some fun tools to play around with.

Aside from the Super Mario 3D World, this game also comes bundled with Bowser’s Fury, an entirely new open-world game mode. In this game, Mario and Bowser Jr. must collect Cat Shines across various islands to stop Fury Bowser, a giant and demonic version of the usual King Koopa. Fans of Super Mario Odyssey will feel right at home, as the Cat Shine challenges are formatted quite similar to the Power Moons in the 2017 title. It all flows quite nicely, as you sail from island to island on Plessie the dinosaur, completing puzzles and unlocking new areas.

Once you have collected enough Cat Shines, you engage in Kaiju battles against Fury Bowser by enlarging into a giant Cat Mario. Although cinematic and exciting the first time around, these battles suffered from their brevity. With the exception of the suitably climactic final fight, the confrontations against Fury Bowser felt kind of quick and repetitive, in a way that Super Mario 3D World’s bosses weren’t. Just jump on him when he exposes his belly, or attack when he rolls at you. Without much else in the way of strategy, the spectacle of a giant golden Cat Mario fighting a giant demon Bowser is all these fights can offer.

Still, overall Bowser’s Fury is quite a lot of fun, with plenty of challenging and creative obstacles to overcome. It makes me excited to see what Nintendo has in store for the next major Mario game, with the lessons they have learned since Odyssey.

Go alone, or with some friends

Both games feature co-op and online multiplayer features. However, based on my experiences with the multiplayer, I think Super Mario 3D World + Bowser’s Fury works a lot better as a single player title. Super Mario 3D World features multiplayer for up to 3 other players controlling other members of the game’s cast. There are some challenges that are indeed more fun with multiple players. However, it has the Guacamelee! 2 problem, where the camera would struggle to keep all the players in frame if they are not progressing at the same pace. Furthermore, the fact that the player with the most points gets a crown to wear in the next episode feels like it goes against the seemingly intended spirit of jolly cooperation. 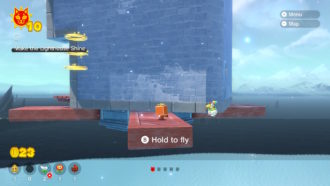 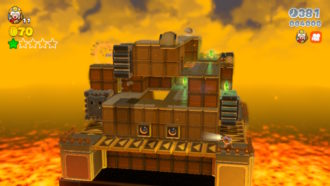 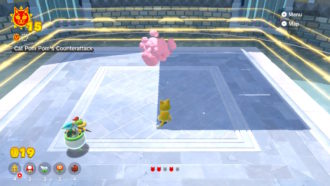 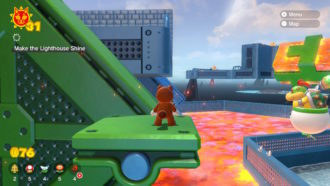 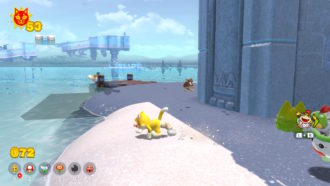 In Bowser’s Fury, a second player can control Bowser Jr. I feel this mode suffers from the camera problems to an even greater degree, as Bowser Jr. can fly (and thus leave the camera frame) despite the camera focusing squarely on Mario. As such, Player 2 is likely to lose track of their player character constantly. Bowser Jr. also cannot use Mario’s powerups or assist in the fights against Fury Bowser, which makes the mode feel somewhat tacked on. It’s a step above the multiplayer in Super Mario Galaxy, but not by much.