Developed by Painkiller and Bulletstorm developer People Can Fly, Outriders is the latest high-profile entry in the genre of co-op focused looter-shooters. Despite a rather rocky launch, impacted by server issues and a few major bugs, the end result is a rather compelling shooter, providing a surprisingly engaging story mode and enjoyable endgame content. However, more improvements may still be required for Outriders to fully meet its potential.

Set in the far future, Outriders’ story mode involves your player character as part of a landing party on the alien planet Enoch, seeking a new home after Earth has become uninhabitable. Unfortunately, things go wrong very shortly in, and a mysterious storm results in many of the colonists becoming ill and gaining strange abilities. Placed in cryogenic suspension for over 30 years, you awake in a world gone to Hell, where the colonists and their descendants are at war with each other and Enoch’s hostile wildlife. You are an Altered, one of the lucky ones to develop superpowers from Enoch’s atmosphere. Tasked by a survivor of the original landing to seek a strange distress signal from beyond the valley, your Outrider and their growing band of companions must venture out to discover the history behind Enoch and potentially chart a new future for humanity.

I found myself quite engaged by the story in Outriders. Each of the supporting characters grew on me during the journey, and can be conversed with at camp to flesh out their history and the world a bit more. That said, I would say that aside from the characters that travel with you, Outriders has a bad habit of anticlimactically killing off antagonists and supporting characters shortly after they are introduced. Sometimes it works to create a tense atmosphere where anyone can die. However, other times it leaves potentially interesting characters short-changed, as they only get a scene or two before exiting the narrative forever.

In terms of visuals, Enoch definitely trends towards the drab and brown end of the spectrum. It works to emphasise how much of a dystopian war zone Enoch has become after 30 years of chaos, but also leaves most of the areas feel quite similar to one another. The gear you can find as well tends to not look too spectacular or distinct, outside of some Rare and Epic gear that can be found. 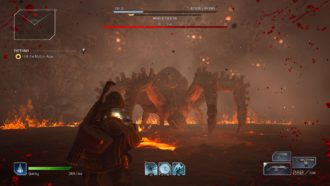 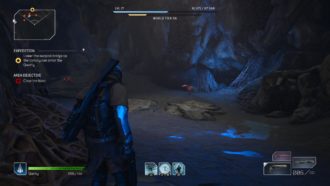 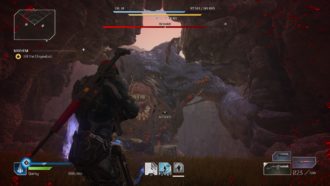 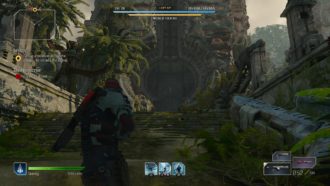 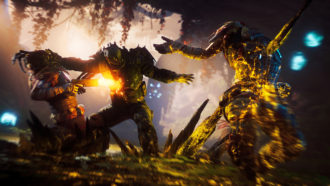 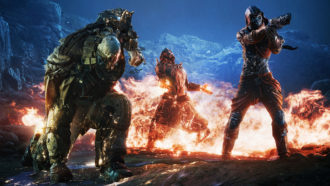 In terms of gameplay, Outriders is a third-person cover-based shooter that really doesn’t expect you to be using the cover very much. There are four playable classes, each with their own mixture of offensive and mobility powers and method of healing. Each class can regain health and shield by taking out enemies in certain ways, encouraging an aggressive style of play as you force your way through the oncoming hordes of foes.

My favourite class that I tried out, the Trickster, gained health and shields by killing enemies in short range, and providing powers that can teleport across the field and damage close-up opponents. It kept the pace fast, and encouraged a thrilling run and gun style where every shootout felt like it could turn on a dime. Other classes had some similarly great abilities, like the Pyromancer’s fire-based powers or the Technomancers turrets.

Oddly, the tutorial encourages playing the game as a Gears of War-style slow-paced cover shooter, despite the mechanics practically necessitating a more aggressive playstyle. Considering People Can Fly’s history with fast-paced arena-based first-person shooters, Outriders may have been better served as an FPS rather than a third-person cover-shooter. You will have a much better time as soon as you stop relying on the cover the game provides you. Still, despite occasionally getting stuck on the chest-high walls when trying to run towards enemies, the actual gunplay and use of powers work very well, for the most part.

The loot itself is decent, if not quite as inventive and varied as you might find in something like the Borderlands franchise. Armour and weapons can each be upgraded, levelled up and modified using different resources found throughout the world. I liked being able to add any mod you have acquired onto new weapons, letting you customise your arsenal to your liking. Mods themselves are also quite creative and varied; one causes enemies to float above the ground for a few seconds once shot, while another causes mini-anomalies that explode, damaging anything in the surrounding area. It’s fun trying different mods and finding the ones that are the most fun or most tactically interesting.

Outriders also does what it can to mitigate the tedium of sifting through your inventory and speed things along. Features such as being able to mass-mark all items of a certain rarity to sell or dismantle makes it easy to get rid of vendor trash. That said, an option to rank items by stat number, rather than just rarity, would certainly be desirable to more easily identify the best items in your collection.

The World Tier system is an interesting feature that I appreciated. Alongside your character level, a different meter called World Tier also levels up as you play. The World Tier acts as a kind of difficulty level, with each subsequent level featuring stronger enemies and better loot. While you can power through and continue to level up the World Tier all the way for the best rewards, it can also be scaled back for those seeking a more relaxed experience. In the endgame Expeditions mode, the Challenge Tier similarly allows the player to scale the difficulty to their liking.

Unfortunately, Outriders has many technical hurdles that it still needs to overcome. Despite the game being effectively playable solo, a constant internet connection is required at all times. This sets it apart from many other games with optional online co-op, such as Borderlands or Dark Souls. This would be fine if the servers were solid, but two weeks after release, I still am often unable to even log in, getting stuck at the Signing In page for minutes on end. Many of my co-op sessions felt rather laggy, and my session crashed at one point due to a server issue. Either Outriders needs an offline mode, or needs to beef up its servers ASAP. Even weeks down the line, many players are still not able to play Outriders when they want to. 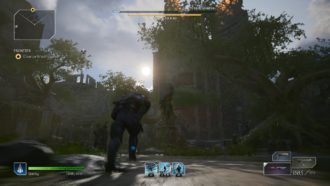 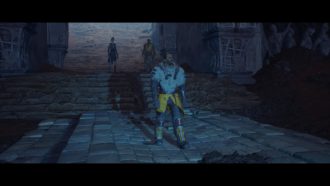 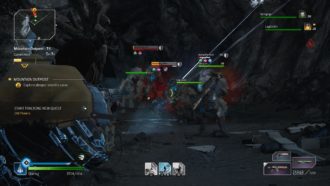 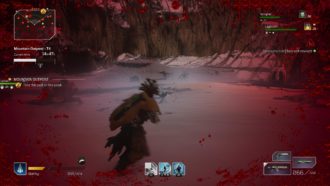 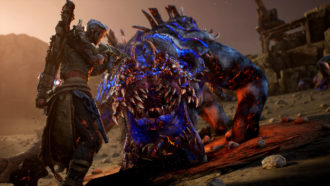 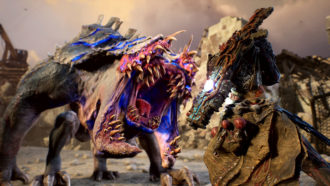 We’re going on an Expedition

Once you have finished the main story mode, Outriders’ gameplay focus changes substantially. The endgame is comprised of Expeditions; timed raids to locate a Drop Pod containing loot. You can technically play Expeditions solo, but Outriders strongly encourages you to play multiplayer for these missions. If you play solo, you have to start the whole thing from the top if you die, which is particularly aggravating when they can last as long as 25 minutes.

If you are playing with others, however, you get a self-revive, as well as friends to revive you. I can’t think of why solo players could not at least have had the self-revive, or some kind of checkpoint system. If you have been playing solo up to that point, the endgame may be where you start looking to matchmake with others. After setting a challenge tier, players gain higher-tier rewards for completing Expeditions within a certain time limit. While I appreciate the added element of taking down the enemies as efficiently as possible, the focus on completing Expeditions quickly penalises character builds not designed strictly around damage-per-second.

This has particularly impacted the Devastator class, which is built to be a tank. A valuable member to have in a party, to be sure, but not when you need to play as efficiently as possible to win the best loot. Hopefully Expeditions will be tweaked in the future to encourage a greater variety of useful character builds, rather than everyone optimising their characters the same way.

That being said, all classes can be tweaked to optimise the build you want to maximise your impact. Each class has three branches of a class tree that can be reset and modified without any penalty whatsoever. Getting lucky enough to find tantalising Legendary weapons leads to high-powered mods that can make a huge difference to the amount of damage your weapons and abilities can dish out. There’s an enticing rhythm to slowly tweaking your character, getting stronger with one piece of gear at a time. While this grind won’t be for everyone, it’s one that has captivated our editor Luke on a nightly basis since finishing the campaign, so Expeditions can definitely be enjoyable if you’re the kind of gamer who likes to loot and shoot their way through lengthy endgame content.

Outriders is not a perfect game by any means. Its narrative, while containing some fun characters, feels somewhat underdeveloped. The conflict between the intended aggressive style of play and the omnipresent walls for cover lead to a strange kind of dissonance where the level design feels at odds with the most fun way of playing the game. The server issues are ongoing and can occasionally make the game inaccessible. The endgame is a lot of fun, but only if you’re playing in a group. When the experience is working well, it is a ton of fun shooting your way through hordes of enemies and marvelling at the latest rare gear. However, while the flaws do not ruin the experience, they are notable. With some more patches planned for the coming weeks, it could easily shift into being a much stronger shooter than it is today, and I sincerely hope that is the case.

Outriders is notably not a “live service” game; unlike Anthem or Marvel’s Avengers, it did not launch with a content roadmap, and no major new expansions have been announced so far. Judging the game by the experience as it is now, I certainly had a good time with it, particularly when I could find a party to play with. However, if you’re only intending to play solo and want a good sci-fi cover shooter, the experience will eventually wear out its welcome as you hit the endgame.