Essays on Empathy Review – A movement in the making

When talking to Jordi de Paco from Deconstructeam, I was struck by how the studio as a whole has thought about game development in the lead up to the release of Essays on Empathy. In many ways, one should expect that all the openness and generosity the team has previously shown in interviews, is now also on display for the whole world.

Essays on Empathy charts the studio’s course through the past ~10 years of making project titles, mostly for game jams. It’s a compilation of 10 games that highlight new and sometimes unconventional narrative techniques. With some games made in just a matter of days, there’s a realness and rawness to these games that isn’t often seen, showcasing a journey through one developer’s historical timeline. In some ways, this leads to a bit of an unvarnished presentation, but if not judged harshly, the flaws merely add to the texture of a set of remarkable games. Essays on Empathy presents experiences that manage surprising dualities. They are well-conceived yet concise, and they’re full of thought, feeling and design yet empty enough to steep in the world and its messages.

Collating a decade of development is of course no mean feat. Each game is relatively simple. Most are game jam titles, mostly Ludum Dare entries, a 72-hour jam responsible for many big indie titles. Of course, many such titles are iterated, developed, and polished from such a point. In fact, such a process leads us from “Zen and the Art of Transhumanism” and “Supercontinent Ltd.” from the collection to the title Deconstructeam is best known for: The Red Strings Club.

Essays on Empathy opens the door on smaller projects. Mileage may vary as to how appealing these short experiences are, although just because an experience is shorter does not mean it provides less entertainment and value. Shorter games may have less content, but generally, they are more focused on making every moment count. That’s not even to say that such a sword should dangle over this project. Ten games with an average of ~30 minutes per game means this collection is easily able to reach its purported 5 hours. Although with replaying levels, looking at concept art, and watching the documentary videos accompanying each game, I reached a bit over 11 hours. 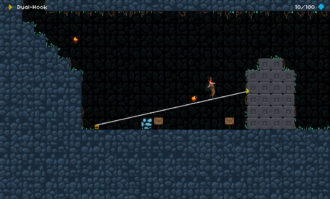 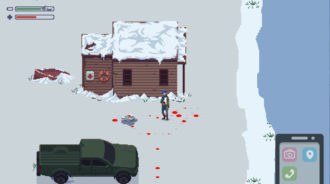 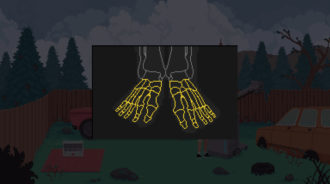 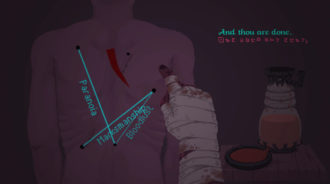 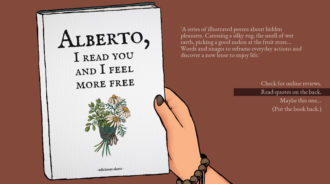 Essays on Empathy says straight from the jump that it’s made up of game jam games, and is presented in that state. As someone who plays jam games on occasion, this was generally fine for me. But for the uninitiated, these small and unfinished projects may come as a bit of a shock.

Game jams are all about working to time, taking a cool concept from head to page to functional game. Certain things fall by the wayside and Essays on Empathy doesn’t patch them in. Of all ten games, there are no menus, no save states, no pause functionalities. The game says this upfront. Players do not get additional controls, they get standard shortcuts. There are no quit buttons, but the menu reminds us that Alt+F4 can end a game. No graphical settings are to be found, but Alt+Enter will do the job. Generally, this is of little consequence.

Underground Hangovers is probably the most notable example. The first game chronologically is unique in that it is a bit longer than most, features more gameplay challenge and annoyingly the escape key closes the game. On multiple occasions I, on impulse, hit the escape key to pause, and in doing so destroyed my progress. On the other end of the spectrum is the game made for the full release: De Tres Al Cuarto. It’s a much longer title than all the others, yet perhaps for the sake of cohesiveness, also has no save states. It’s an interesting situation, as we have a game that is essentially telling you upfront to buckle in, to commit to playing it in one go. They take you into the theatre and deliberately lock the door after you.

It’s perhaps appropriate then to spend some time discussing De Tres Al Cuarto in detail. One may consider it a very important game as it’s the one title not already available to play on Itch.io, the only game only available through this collection. This is the longest game in the collection, the final game, a culmination of Deconstructeam’s best work. It attempts to stitch together the philosophy that the company is trying to weave for itself as a creative entity.

De Tres Al Cuarto is, in a sense, a game about creative iteration. It follows two men through their personal and professional relationship as a two-bit comedy act. The act, in itself, “De Tres Al Cuarto”, is a Spanish phrase for something that is cheap, third-rate. The name comes up at the start of each show, each running through the same dialogue. The gameplay itself is a deck builder. For each setup you can tell a punchline, tell a bad punchline, just kill the conversation completely, or build on the setup, based on the cards you have. It’s a good mechanic. It lets you lean into the characters, trying to play cards well as they in turn try to work at their comedic banter.

As you progress through your set, the better you perform, the more “inspiration” you get. This is an asset that you can spend to upgrade your deck by getting new cards and swapping out old cards for better ones. It seems like a game you could win given enough time. However, this future is not, shall we say, in the cards. Like with any craft, improvement is not a straight path. Improving your deck is an intentionally laborious process. Each set will likely give you at most 5 points or so, whereas most upgrades cost 6 or more points. By the time you start feeling like you’re hitting your stride, the game is wrapping up.

“…they joke about themselves and each other in naturally charismatic, humourous ways that are divorced from their comparatively rigid back and forth on stage”

Between each set is where the story of Bonachera and Garza spills out. They discuss hopes and dreams and fears and regrets between shows. There’s a routine to the game, one that fits the subject matter. It parallels the studio’s vision of a creative life, where one works not for a great game, but in a way that keeps self-care as a priority. This is not always a wholesome movie moment. Such as in life, it can just be going through the motions and hoping for the best.

There’s an interesting dynamic between these two parts of the character’s lives. In private, in hotel rooms and bars, and on the beach, they joke about themselves and each other in naturally charismatic, humourous ways that is divorced from their comparatively rigid back and forth on stage. There’s a different air to the way they converse when there is no pressure, they are different people, they have depths that are not present when they become caricatures of themselves.

This is a game about being a creative person. I can speak in a sense from personal experience. Across YouTube to game criticism to music production, I can say that creative work is not simple. I’ve worked for long times without much pay, in a world that considers such people a drain on systems. You try not to get dragged into such thoughts, but you can lead yourself into following a north star of the “future successful self”. De Tres Al Cuarto reflects that from time to time.

De Tres Al Cuarto in many ways feels like it goes nowhere on purpose. It’s a classic reflection of the old saying “it’s not about the destination, it’s about the journey”. As each panel slides to the next, the characters aren’t going anywhere. They’re going around in a cycle. They’re on this island just milling around from gig to gig, save for what scant improvements they make along the way. But in truth, the only thing that one can appreciate in this loop is the nights after the show. The drinks, the games, the deep conversations. Having a chance to improve the situation of these characters is an admirable goal, but it’s not where the real heart of the game lies.

My focus here on De Tres Al Cuarto should not undermine the importance of the other nine games on offer. So many are absolutely wonderful. Underground Hangovers is a mechanically engaging, if somewhat endearingly buggy, mining Metroidvania. Zen and the Art of Transhumanism presents a duality between calm and existentially ponderous. Supercontinent Ltd. has an ability to seamlessly let you slide into narratives, and, alongside Zen and the Art of Transhumanism, provides a peek behind the curtain of The Red Strings Club. Eternal Home Floristry has a beautiful ticking clock approach to interweaving narrative with creativity-based gameplay.

I must also mention my personal favourite game jam title in the compilation, Behind Every Great One. It’s a truly impactful game, with a sobering view of how abuse can subtly trickle into a home. Not a flashy, bloody, glass-smashing type of abuse, but an unwarranted critique, a begging “please”. It showcases how a house can become cavernous and devoid of warmth, yet be increasingly claustrophobic and overstimulating. It made me reflect a lot on people that I should appreciate more, and the subtle feelings I’ve had of being too generous with my own resources.

All of these games are a new world. A new set of ideas, a fresh set of principles. They manage to span all manner of topics, moods, and themes. Of course, I do not love all these experiences equally. Some admittedly felt a bit empty at times. Though even the empty moments felt like held moments to reflect and to stew on the ideas being presented. As a whole, they are worthy of investing the time to truly immerse in their waters. I’m already looking forward to waiting some months, for some of the sparks of memory to fade somewhat, so I can re-engage with a new perspective, and once more appreciate this compilation for everything that it does.

I am really not certain how one can distill the experience of this project into a single number. To be completely fair, the very, to put it nicely, rustic nature of throwing game jam titles unpolished into a bundle may be a bit beyond some people’s thresholds. I would also be lying were I to ignore the times where things went a bit haywire. But as it stands, I’m genuinely tossing up as to whether this could be my new favourite game of the year thus far.

At an absolute bare minimum, Essays on Empathy is a fantastic project. Very few games have really given this level of insight into the world of the developer. Truly, this is one of the most impactful games I have played in years. Some of these titles touch on private pains and give a sense of clarity and non-judgemental exploration. I am honestly so appreciative. When I write about games, I tend to talk a lot about indie titles, and it’s because of games like this. Games that are as great as this should be known the world over, and I’m proud to push the needle in the right direction.