Wizards of the Coast

Dungeons & Dragons: Dark Alliance takes up the D&D hack and slash mantle from the classic Baldur’s Gate: Dark Alliance games from 20 years ago, bringing a new cast of heroes and plenty of co-op-focused fantasy brawling. As with the tabletop game it adapts, the experience is certainly enjoyable with friends, but a lack of polish and a repetitive gameplay loop drag down what is otherwise a fairly enjoyable experience.

Dungeons & Dragons: Dark Alliance is set in the timeline of R.A. Salvatore’s The Legend of Drizzt novels, right after the events of The Crystal Shard. You play as one of four adventurers, from the Dwarven fighter Bruenor Battlehammer, human Barbarian Wulfgar, human Ranger Catti-Brie and Drow Rogue Drizzt Do’Urden, as they fight against a horde of goblins, verbeeg, duergar and other classic D&D baddies in Icewind Dale as they seek the Crystal Shard, a powerful magical artefact.

Despite being an avid player of the Dungeons & Dragons tabletop game, I haven’t read any of R.A. Salvatore’s books, and didn’t know what to expect from this cast of heroes. Aside from short pre-mission cutscenes outlining what the basic plot of the mission is, the game doesn’t do much to establish characters or narrative beyond the barest minimum context required to motivate the gameplay. If you went into Dark Alliance not knowing who Drizzt or Bruenor were, you will finish the game still not really knowing who they are. 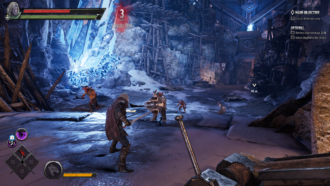 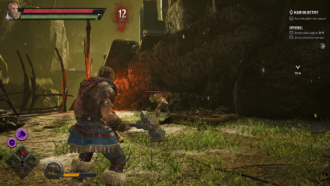 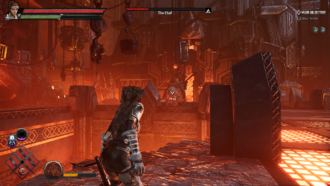 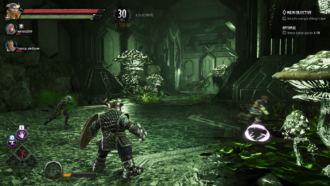 Admittedly, a multiplayer-focused game can often get by without a substantial story focus. Once you’ve picked which of the four leads to play as, you’re dumped in the hub area of Kelvin’s Cairn and get to pick a mission from the map to teleport to. Missions consist of a succession of battle areas, interspersed with puzzles, mini-bosses and the occasional light platforming section. Combat starts pretty simplistic, being limited to light, heavy and ranged attacks with a couple of character-specific special abilities. Once you level up and purchase new moves, it starts to get more interesting. Eventually, you get a lot more freedom to take down foes in more spectacular ways with different combos to launch or push enemies, or inflict status effects.

There are several risk-reward features built in to allow the player to tweak the difficulty to their liking. Not unlike Outriders’ World Tier system, players can pick a Challenge Level that raises the difficulty, but also improves the quest rewards. A more downplayed example is the way Short Rests work; after an encounter, the player can choose to take a short rest, which restocks your usable items and creates a new checkpoint. Choosing to abstain robs you of the checkpoint, but improves the loot rarity for the mission. I appreciated that degree of control over the difficulty, and how it gives more options for players looking to challenge themselves.

That said, I do have my bugbears with the combat system. You can lock onto enemies, but doing so moves the camera uncomfortably close to your player character. This practically ensures you’ll get hit by an enemy behind you or to your side that you can no longer see due to the claustrophobic perspective. God of War (2018) also had a really close-up camera in melee combat, but it compensated with Atreus warning you of incoming enemies and a helpful UI. A further-away camera would make enemy detection much easier, particularly for solo players who are attracting all of the enemy aggro.

“…if you’re only playing single player, you will have a diminished experience  compared to multiplayer.”

Although Dungeons & Dragons: Dark Alliance can be played solo, it is substantially better with some friends. Unlike the Borderlands franchise, whose trademark Fight For Your Life mechanic lets anyone claw their way back from a cheap death regardless if they’re playing solo or in multiplayer, dying in Dark Alliance boots you back to the last campsite you set up.

Furthermore, considering there are special team attacks that can only be pulled off when playing with others, the fact that there are no AI teammate options feels like a big oversight. Simply put, if you’re only playing single player, you will have a diminished experience compared to multiplayer.

The level design itself is something of a mixed bag. They have a somewhat open structure, with plenty of branching paths and opportunities to veer from your main goal. However, the potential side content is pretty barebones and repetitive, usually just either taking down a mini-boss, or locating a number of hidden objects.

Almost every level has these exact side quests, along with the same puzzles of locating a lever switch or explosive barrel to bypass an immovable obstacle, or using a flaming sword to walk across icy paths. The lack of variety in objectives outside of combat leads to the game’s levels feeling very similar to one another. Some of the much later levels start to mix things up a bit, but a greater variety in the puzzles would do a lot to keep the levels from feeling like simple pallete swaps of one another.

The main motivation to press onwards for most players will probably be to improve their characters and find better loot. The way loot works in Dungeons & Dragons: Dark Alliance has positive and negative aspects. On a positive note, nearly all loot changes your character model, and can be further customised with different skins by Kartik the merchant. You can upgrade loot you find with materials found in the field, to keep any Rare or Epic equipment viable for a few missions longer.

However, the process of actually acquiring the loot in the first place sucks out most of the joy of discovery that powers a loot-driven game like this. Similarly to the ill-fated Anthem, you cannot actually see or equip the loot you acquire until the end of the mission. You only know that you have found, say, an Epic Bow, but cannot confirm if it is actually better than what you already have until it has been identified back at base. And once you do reveal all the loot, it is placed in a cumbersome vertical menu that is slow to browse, when a simple grid would have made it much easier to confirm how many items of each rarity you have just acquired at a glance. That process of delayed gratification makes the prospect of finding a chest or beating a mini-boss far less immediately exciting than it could be. 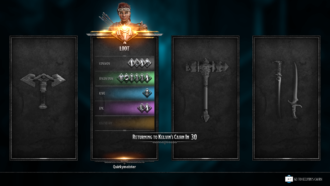 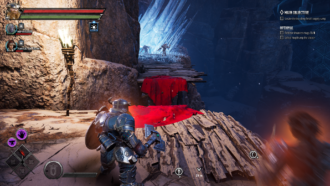 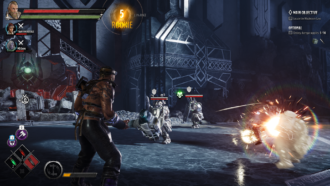 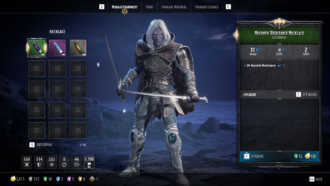 Unfortunately, while the game’s characters and levels can often look very visually spectacular, the experience in Dungeons & Dragons: Dark Alliance is very often marred by technical issues. Enemies often take a weirdly long amount of time to actually register the players’ existences, leading to them not fighting back until they’re already being assaulted by Wulfgar’s warhammer. Enemy bodies would flop about or roll around after death, or occasionally (and hilariously) fly off into the sky, Team Rocket-style. Often even riding elevators would lead to me ascending a further ten feet into the air for no reason once it reached the top. During my online multiplayer sessions, other oddities occurred, like jarring frame rate drops while riding elevators.

Aside from common-or-garden technical glitches, Dark Alliance is also launching without many important features. Gameplay elements such as cross-play, local multiplayer and even the ability to have multiple players pick the same character in multiplayer sessions are being patched in post-release. While it is not unheard of for games to get these features even 5 years after launch, when combined with the other myriad issues the game is dealing with, it feels like Dark Alliance might not be quite ready for showtime just yet. On the plus side, several free DLC, including additional missions, has also been announced to release throughout the year.

Dungeons & Dragons: Dark Alliance isn’t a bad game, but it does feel insubstantial at the moment. The lack of character development, plot or world-building will probably turn away hardcore D&D fans. As for the fans of multiplayer action games, while the core of the experience is fairly solid, the lack of technical polish, repetitive structure and unexciting loot system will likely not satisfy for long. Hopefully over time, patches and additional content can flesh out the experience and make it the rollicking fantasy hack and slash multiplayer funfest it has the potential to be. Just make sure you don’t forget to bring a friend or three.