Joining Untitled Goose Game in the oddly specific “indie games centred around mischievous waterfowl” genre is Mighty Goose, a love letter to classic arcade run and gun games, featuring a bounty hunter goose in power armour for some strange reason. While retro nostalgia is a well many indie developers have drawn from, Mighty Goose fortunately balances its arcade influence with modern game design that makes for an engaging little package that any shooter fan can have fun with.

Mighty Goose follows the exploits and adventures of the titular bounty hunter, a goose in a mech suit who travels the galaxy in his starship righting wrongs and hunting the enigmatic Void King. It’s a simple but effective premise, told through mid-mission dialogue and short cutscenes. Similar to Gato Roboto, much of the game’s surreal charm comes from Mighty Goose just acting like a goose, while everyone else talks normally. Bonus points for having a totally gratuitous “honk at your enemies” button. It doesn’t have any gameplay benefit, but it is certainly hilarious.

The gameplay is fairly standard 2D run and gun gameplay, with some platforming challenges thrown in. The game can be decently difficult, due to Goose being fairly fragile. However, it fortunately eschews many outdated arcade tropes, like a lives system. In fact, there are several welcome factors that make Mighty Goose more approachable for all players. These include health and ammo drops scaling to how well you’re doing, and enemies delaying actions if the player has been hit several times. Some may consider these affordances against the spirit of the classic games Mighty Goose is emulating, However, I thought they were helpful, and ensured that the game felt fair and consistently enjoyable.

Mighty Goose takes measures to keep things fresh during its brisk runtime. There are several vehicles that Goose can find or unlock in levels, including a motorbike, a tank and a plane.

Players can also equip special companions, weapons and upgrade chips to customise how you take down foes. These are small touches that are fun to play around with, even if their impact on gameplay is not massive.

On the presentation front, Mighty Goose doesn’t disappoint. From the dingy spaceship interiors, to a mysterious forest planet, to that one level that looked like a Mad Max movie, the game isn’t hurting for visual variety or flair. Mighty Goose and his companions all have adorable idle animations that give them loads of personality. My favourite touch was Goose’s head poking into the foreground when you have a high combo count going on to honk in approval at how well you’re doing. Dominic Ninmark’s catchy and energetic soundtrack also helps to create a positive experience. 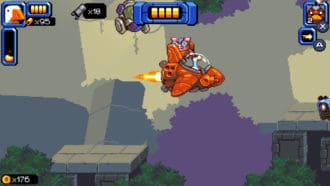 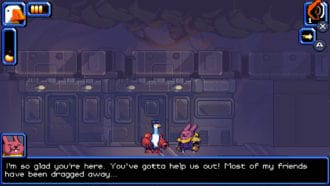 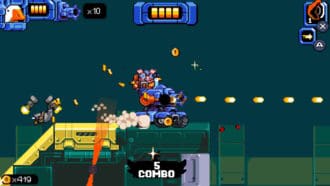 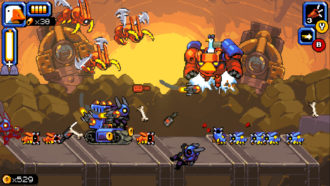 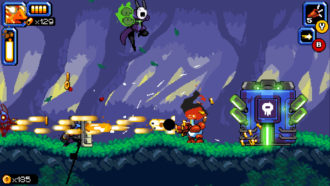 Mighty Goose is not over once the credits roll, following its main story mode. There are additional mirror levels to complete after the final credits, but they did not feel meaningfully more challenging than the main game. There are unlockable companions and upgrades to be found if you want to fully explore and go for 100% completion. However, replaying every level just to finish the full game ended up feeling like a slog; more modifiers for the new game + mode, like different enemy types, limited upgrades or remixed bosses might have kept that endgame experience feeling more fresh.

In addition, the fact that you have omnipresent AI companions makes the lack of any local or online co-op multiplayer feel more glaring. It felt like it would have given more depth, and felt appropriate for the arcadey kind of shooter that Mighty Goose is.

Mighty Goose will likely appeal to you, whether you have played classic 2D run and gun games like Metal Slug or not. From its charming animations and characters, fun weapons and catchy soundtrack, it’s hard to not have a good experience during the game’s short runtime.

However, it does start to drag a bit by the end, and it may have been more fun with the addition of co-op. That all said, Mighty Goose is a great little burst of shoot ’em up arcade goodness, and succeeds at bringing that old style of game into the modern era.