Developed by Montebearo, Banners of Ruin takes a now-familiar deck-builder roguelike structure seen in popular games such as Slay the Spire, Griftlands and Monster Train, and adds their own spin on that familiar turn-based combat system. Having been in Early Access for quite a while (with Checkpoint’s Lise having covered an earlier build last year), it is finally ready for its full release. Featuring a variety of anthropomorphic animals armed to the teeth, and a rather deep combat and upgrade system, Banners of Ruin manages to stand out and bring something new to the table in the increasingly diverse card-based roguelike genre.

In Banners of Ruin, you play as agents of the Blackfoots, a clan seeking to take down tyrannical House Ender by infiltrating the city of Dawn’s Point. Starting off with two characters, you can eventually recruit up to a party of 6. To begin with, you only have access to Mouse and Bear race options, however several more become available as you progress. As you venture deeper into the city, you often get to make choices that determine just how much more morally superior you are to House Ender; upon seeing a merchant being harassed by guards, will you stand up for them and risk a combat encounter, or steal some florens in the scuffle and leave them to their fate? While there isn’t the same level of story focus as some other roguelikes, Banners of Ruin’s strong writing and intricate character and card art designs went a long way toward immersing me in the setting, even across multiple runs.

Once you have started your run by picking the species of your two starter agents, you progress by choosing one of three encounter cards. These might be combat, a merchant or something else entirely. Unlike in Slay the Spire, you can’t see what encounters will come next, only how many more until the next boss encounter. There is a decent amount of variety and mystery to some of the encounters; some of them provide benefits with no strings attached, whereas others might ask you to give up something in return.

The encounter system in Banners of Ruin seeks to mitigate some of the frustrating randomness inherent to the roguelike genre; for instance, the set of encounters prior to the boss will always provide major benefits, like a tavern to recruit new agents, a full heal, or more equipment. Although some runs will be less successful than others, you’re not going to progress far without the game providing SOME kind of useful upgrade. 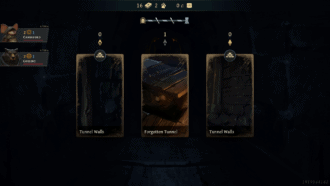 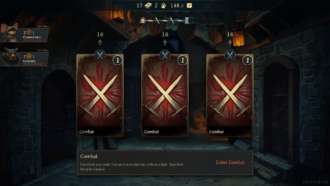 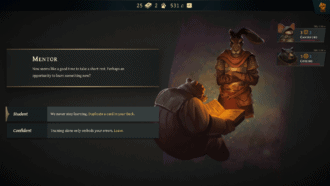 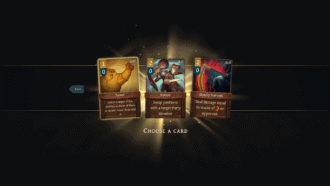 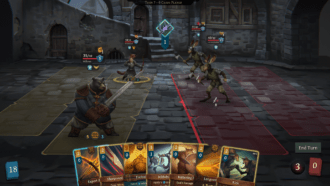 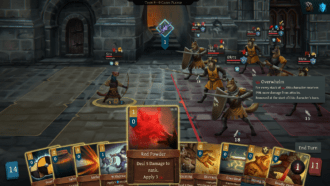 When you do enter combat, things might look pretty familiar to veterans of Monster Train and Slay the Spire, with some notable differences. You are dealt a hand of cards which include Strike, Guard, Weapon and Talent cards, among others. Each of your units has a reserve of Stamina and Will points; Stamina fully recovers each turn, whereas Will points are exhausted until the end of the encounter. Your turn lasts until you run out of cards in your hand, or your units run out of resources. You and your opponents take up two rows, and certain cards will have different properties depending on if the unit playing it is in the front or back row.

“Learning the ins and outs of the combat system in Banners of Ruin feels very satisfying.”

Overall, the combat system is quite intuitive, particularly how hovering your mouse cursor over a card will display a little glossary explaining key terms, like what the Wound status effect does or what it means if the card is Banished. Doing the same for the little icons above units’ heads also provide a summary of what they mean.

Before long, you will have a stockpile of cards that can create devastating combinations when used in conjunction, like the Hatchet card generating Charge if you use it to reduce an opponent’s Guard to zero, and then following it with a multi-attack card like Rush that adds the additional Charge damage per hit.

Furthermore, you can also see which enemies will attack each of your units, letting you set up countermeasures. One option might be to stack a bunch of Guard cards to tank the hit. Alternately, cards like Kick that let you move an opponent can cancel their attack entirely. Learning the ins and outs of the combat system in Banners of Ruin feels very satisfying.

With that said, there are some complexities to the combat that don’t feel entirely necessary. The intricacies of some of the similar-sounding status effects make sense in practice (for instance, stacks of Bleeding damage impact your Vitality directly, whereas Poison damage will impact your Guard, if you have any). However, other effects like Vulnerable and Overwhelm both do the same thing, only one wears off at the end of the overall turn and the other wears off at the end of the character’s turn.

In addition, Banners of Ruin can be rather buggy at times. In particular, I experienced a persistent bug where the game would freeze if I discarded a card whose effect only triggers when discarded. Hopefully this will be ironed out following the full release of the game.

I kept coming back to Banners of Ruin due to how consistently rewarding it felt, even when you lost. Even on failed runs, you unlock experience that goes towards unlocking new races and other bonuses.

Even several hours in, you’re generally obtaining some new feature or another every run or two, even if you don’t get particularly far.

Banners of Ruin is also on the more forgiving end in terms of difficulty; while the early stages can be challenging, it generally doesn’t take long until you are powerful enough to make it through to the endgame. Some more hardcore roguelike purists may baulk at its relative easiness, but I found it enjoyable. However, a more challenging difficulty option may be desirable for some players.

Even if it can feel like the deck-builder roguelike genre is getting a bit oversaturated, Banners of Ruin is definitely one to check out. With its generous and frequent unlocks, as well as its complex-yet-mostly-well-explained combat mechanics, it is easy to pick up and enjoyable to master. While it is not as challenging as some of its roguelike cousins, I personally found its user-friendliness a positive quality. If you are looking for another deck-builder roguelike to play, you should definitely add Banners of Ruin to your deck.