Orcs Must Die! 3 is the long-awaited third instalment of the franchise that takes the tower defence genre, typically a rather hands-off affair, and turbocharges it by letting you dive into the fray yourself and hunt down waves of orcs alongside your system of traps. Beginning life as a timed Google Stadia exclusive of all things, the title has finally arrived on other platforms. Despite the addition of two new modes and an entire additional campaign, this entry doesn’t really bring any particularly substantial changes to the series formula. Fortunately, Orcs Must Die! 3 is still a lot of fun, and tower defence fans are likely to have a good time, especially if playing with a friend.

The main campaign of Orcs Must Die! 3 takes place 20 years after the events of the second game. It follows two new apprentice war mages, Kelsey and Egan, as they fight back against a mysterious resurgence of orc invasions while learning of the exploits of a duo of master war mages from centuries in the past. Although it has its twists and turns, it approaches the fantasy tropes it uses with a knowing wink, rather than expecting the player to take it too seriously. Similarly to the previous titles, this entry isn’t too concerned with telling a detailed narrative, focussing more on the comedy of watching an orc burst into flames from your floor scorcher and then fly into the sky when it wanders onto a flip trap.

The tried and tested hack-and-slash meets tower defence formula of the previous games still works perfectly well in Orcs Must Die! 3. You must defend your Rift from waves of orcs, kobolds, gnolls and other monsters coming from all directions by setting up lethal traps and barricades, and mopping up whatever makes its way through with your own weapons and magic. Similarly to the Rampage quests in Monster Hunter Rise, the experience feels a lot more active than your usual tower defence game, as you are able to wade into the horde yourself and do some damage rather than sitting back and letting your traps do all the work.

You will want to make good use of your traps, however. As with Orcs Must Die! 2, Orcs Must Die! 3 includes co-op for two players, and doesn’t make many concessions for solo players. Most levels are manageable if you’re playing on your own; through clever use of barricades, you can generally funnel the waves of orcs down one or two more easily defensible corridors rather than try and be everywhere at once. However, the difficulty in the campaign ramps up quite quickly, and one gets the sense that the developers were designing many of the stages with two players in mind. 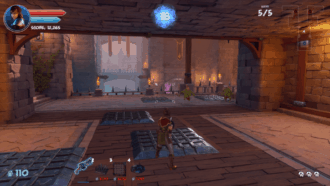 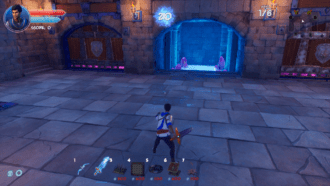 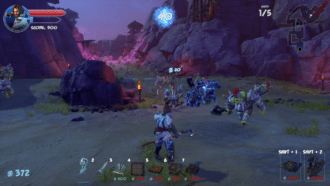 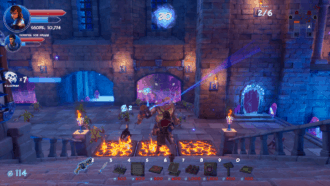 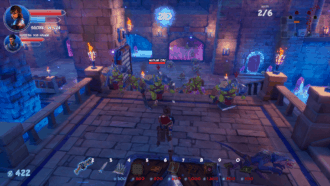 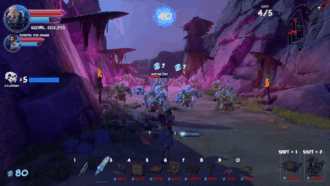 There is a good amount of variety on display, at least. Traps range from floor tiles that deal fire or acid damage to wall-mounted boom barrel dispensers to a tractor beam on the ceiling that lifts orcs up and makes them a sitting duck for your ranged weapons. New orc varieties are also regularly introduced, often forcing complacent players to mix up their strategies. For instance, certain enemies are weak to or invulnerable against certain elements, making a floor scorcher useless against a group of fire fiends. Other enemy types, like sappers and some boss enemies, can destroy barricades, allowing enemies to bypass your perfectly constructed hallways of death.

Overall, the gameplay in Orcs Must Die! 3 feels more focused towards the action side of things, in a mostly positive way. There is no longer any penalty for dying; now you simply respawn at your Rift if your player character runs out of hit points. I appreciated that I no longer had to play as cautiously, which made me more comfortable with investing in weapon upgrades. Traps have also been rebalanced somewhat and feel less powerful, possibly to motivate the player to do more of the killing themselves.

“Unfortunately, the War stages are not really the great step forward that a new mainline entry really needed.”

One of the main new features in Orcs Must Die! 3 is the addition of War stages. These are basically just the regular maps, but much bigger. Mostly taking place in large open areas, you have access to special traps that can damage dozens of orcs at once, such as giant flip traps and boom barrel catapults. Unfortunately, the War stages are not really the great step forward that a new mainline entry really needed.

While it is pretty spectacular to destroy a big group of orcs in one go, the wide-open spaces just mean a bigger chance of enemies totally side-stepping your traps. Furthermore, the special War traps can only be used outdoors for some reason, so when the orcs make it through your preliminary defences and into the castle you are defending, you’re back to using the normal traps just like any other stage. Waves in the War stages could also take an obnoxiously long time, especially if you’re playing solo.

Fortunately, the orcs in Orcs Must Die! 3 are not just quantity over quality; while the War stages show that more of them can now be rendered at once than ever before, the visuals overall are a noticeable improvement over the game’s now 8-year-old predecessor. The orcs succeed at being visually distinct at a distance, which is important when judging if the trap you’re hurriedly placing to stem the oncoming tide will be effective or not. The orcs themselves are also kind of adorable, with their big heads and goofy war cries as they rush towards you. Not so adorable that I wasn’t comfortable massacring them en masse, that is, but I still found the enemy character designs appealing.

Unfortunately, I felt that the level design in most stages was a bit of a step back from Orcs Must Die! 2. They started to blend together after a while, with most of them being variations on a theme of “several narrow hallways leading towards a centre room with a Rift”. Few levels felt poorly designed, however I would have liked something like the mine cart hazard from the second game, which could hurt you or the oncoming orcs.

The other major additional game type in Orcs Must Die! 3 is Scramble mode. Scramble unlocks after you get about halfway through the first campaign. Featuring five stages steadily increasing in difficulty, each successive stage adds a new buff for yourself and for your enemies. You get to pick which one applies out of two options, and get a free reroll if you don’t like either choice. The debuffs you pick might make the orcs immune to lightning damage, or increase mana costs for your magical attacks. On the plus side, you can also be aided by cool benefits, such as floor traps costing less or having shorter cooldown times.

These buffs and debuffs persist across a run of Scramble mode, leading to crazy scenarios where your foes are immune to fire damage and are accompanied by archers and armoured orcs, while your floor and wall traps are all half price and have reduced mana cost. These modifiers shook up the gameplay in a good way, and added a fun degree of replayability for fans after they have finished the campaigns.

Performing well in missions grants the player skulls, which can be spent on upgrades to your traps, weapons and trinkets. I liked how through frequent use, traps can unlock special upgrades that add special bonuses or elemental abilities. The main campaign is somewhat sparse with skulls, however; if you want to unlock a substantial amount of upgrades, you will need to grind the Endless and Scramble modes.

Orcs Must Die! 3 is definitely a case of “another verse, same as the first”, but fortunately the formula still holds up. The changes to gameplay balance mostly work, as does the implementation of the new Scramble game mode. However, the War mode shows that throwing more orcs into a stage doesn’t necessarily make it more fun, and the level design generally doesn’t feel quite as fresh as it once did. All that said, the visceral pleasure of slicing through a group of orcs with a buzzsaw launcher is as present as ever, and ultimately the experience is still a fun time. For tower defence fans, Orcs Must Die! 3 is worth checking out, particularly if you’re planning on playing co-op.