Warhammer 40,000: Battlesector is a turn-based strategy game developed by Black Lab Games and published by Slitherine. It’s an adaptation of the popular Warhammer 40,000 board game and comes with a single-player campaign, a skirmish mode, and a multiplayer mode. The game also comes with two playable factions: the Blood Angels and the Tyranid.

Set entirely in the 41st Millenium in the Warhammer universe, Warhammer 40,000: Battlesector’s main campaign sees you playing as the Space Marine faction. Told from the perspective of Sergeant Carleon, the campaign’s story has the Blood Angels — one of the First Founding legions of the Space Marines in the Warhammer world — having to defend their homeland of Baal from a Tyranid invasion. Spread over twenty missions, you’ll have to use your forces to push back enemy Tyranid alien units and save your home. Along the way, you’ll meet supporting characters and undertake missions with unique goals ranging from protecting and escorting units to defending targets. Your enemies — the fittingly terrifying Tyranid aliens — all come with their own units and skills. To emerge victorious from a battle, you’ll have to think carefully about how to position units on the battlefield, which skills to use in battle, and how to take advantage of each mission’s maps and terrain.

Battles take place on a hex-based map and since Warhammer 40,000: Battlesector is turn-based, each unit receives a certain number of action points per turn, which can be used to perform attacks, move across the map, or perform defensive actions like overwatch. How many units you can have on the battlefield depends on the mission in question; each unit is worth a set number of points, and depending on the campaign mission, the point cap on an army will differ. The higher the point cap, the more units you can include in your army. As you progress through missions, you’ll also have the ability to unlock new kinds of units, and upgrade others. In total, both factions have thirteen army units to choose from, all with specific advantages and strengths.

On top of this, the Blood Angels faction also features two hero units: Sergeant Carleone and Brother Atreus. Similar to other strategy games with hero units like Age of Wonders: Planetfall or Conan Unconquered, both units have additional special attacks and skills that can influence your strategy on the battlefield. While Brother Atreus has healing powers that can be used on friendly units, for example, Sergeant Carleone has the ability to boost units’ accuracy and defences. After each successful mission in the game’s campaign, you’ll also earn HQ tokens for your hero units. These tokens can be used to upgrade your hero units’ special skills and abilities further through two dedicated skill trees. I found this a great way to keep me invested in my hero units’ skills, and the skill trees add a nice sense of progression to the single-player campaign, too.

“…an enjoyable and immersive experience in the 41st Millenium.”

While I would’ve liked to have had more playable factions in the game to choose from, the variety of individual units for both the Blood Angels and Tyranids is excellent. Each faction comes with a good mix of both aggressive and defensive units and the fact that the game gives you the opportunity to rearrange your army before each mission in the single-player campaign keeps things dynamic and fast-paced.

What interested me most about the game, however, were the battle mechanics. Aside from standard turn-based combat where you use action points to move, defend or attack, Warhammer 40,000: Battlesector also features momentum and surging mechanics. These features are new additions to Warhammer strategy games and influenced my playstyle in battle. Essentially, your units gain momentum when they attack and kill entities in enemy units. The more fatal damage units deal to an enemy unit, the more their momentum meter builds up. Depending on the amount of momentum a unit has, you’ll have the option to spend it and allow a unit to surge or be empowered, or to hang on to it for passive attack or accuracy bonuses. 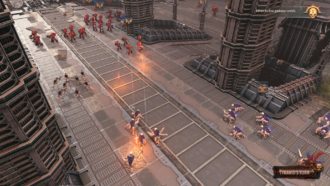 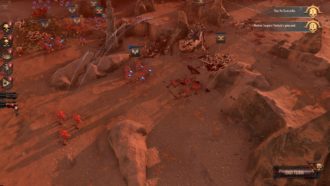 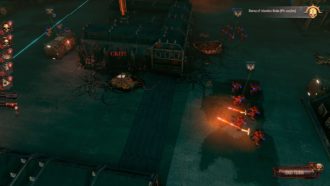 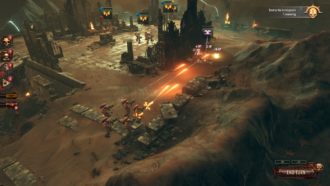 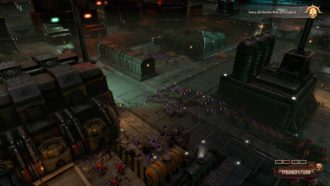 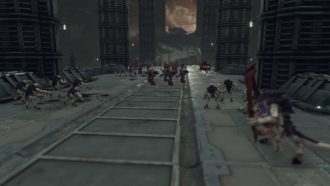 If you choose the ‘surge’ option, all of your momentum will be spent in one fell swoop, but it will increase the effectiveness of your next move on the battlefield, and, if used well, this can effectively turn the tide of the battle. The exact bonuses you get from momentum depend on the faction you’re playing with. For the Blood Angel faction, the momentum you’ll receive will depend on where you are in relation to the enemy unit; the closer you are to them in the fight, the more momentum you gain. The Tyranids, on the other hand, only gain a significant amount of momentum when they’re right in their opponents’ space, but in both cases, the momentum mechanics push players to adapt their playstyle and make it more dynamic. In my case, I found that momentum made for a much more aggressive playstyle than I would usually go for, which was refreshing. I found myself thinking a lot more carefully about when to unleash devastating special attacks onto my opponents and advanced my troops a lot more readily than I would have in other strategy titles.

The fact that Warhammer 40,000: Battlesector rewards players for taking initiative is also very fitting for the Blood Angels faction, which is the only faction you can roleplay as in the single-player campaign. Since the Space Marines are fearless militaristic forces who aren’t afraid to plunge themselves into battle, an aggressive playstyle complemented the campaign’s story, characters, and bombastic voice acting perfectly. In typical Warhammer style, the dialogue and characters are dramatic and grand, and, combined with the stunning graphics in the game, it all makes for an enjoyable and immersive experience in the 41st Millenium. The only thing that would’ve made the campaign more interesting, in my opinion, would have been an added single-player campaign that saw you playing as the Tyranids instead. Seeing things from the aliens’ perspective would’ve certainly made for an unusual experience, and one I would’ve been intrigued to learn more about.

Overall, Warhammer 40,000: Battlesector is an excellent addition to the Warhammer video game universe. With an immersive single-player campaign and interesting mechanics on the battlefield, this game will be a joy to play for strategy fans, no matter whether they’re die-hard Warhammer fans or total newcomers to the Warhammer world.

Warhammer 40,000: Battlesector is a solid strategy game and an excellent addition to the Warhammer catalogue. Although the game only comes with two playable factions, its variety of units for each faction and original combat mechanics keep the game’s core gameplay fast-paced, dynamic, and interesting. This, combined with beautiful visuals and an immersive story told in typical Warhammer fashion, makes for a fun strategy romp from beginning to end, no matter whether you’re a die-hard Warhammer fan or a total newcomer to the Warhammer world. If you’re keen on turn-based strategy, Warhammer 40,000: Battlesector will be an excellent addition to your library.