One of the most famous scenes from Aliens (1986) represents the tone and feel of Aliens: Fireteam Elite perfectly. Seven years after Alien: Isolation and eight years after Aliens: Colonial Marines, this third-person shooter attempts to bring the action and fuel fans want from the universe. While decimating ambushes of vicious Xenomorphs is admittedly great fun, there are parts of Aliens: Fireteam Elite that are too lean for its own good.

Express elevator to hell, going down

Set in 2202, the Marine Assault Unit reroutes to a distress call from planet LV-895. Deadly legions of Xenomorph occupy this sector of the outer colonies, and it’s up to your elite fireteam to complete the rescue, uncover hidden corporate secrets, and overcome the alien threat.

Aliens fans will notice familiar narrative beats throughout the campaign which may be warming or boring, depending on the person. Between missions, you’ll return to a central hub where several Lieutenants and Sergeants will share exposition or additional context from collectable intel in regrettably static interactions. Overall, the story and world-building are serviceable. It drives the gameplay and does have moments of charm but won’t deliver the creativity its source material has.

The story is staged across four acts containing three missions each. Undeniably, the game starts considerably basic. You’ll be fighting through the Katanga refinery tasked with extracting Dr Timothy Hoenikker, firing through conventional space station hallways. As you progress, LV-895 has jungles and ancient alien architecture, with the stand-out being the third act’s HR Giger styled levels. There’ll be evil AI, corporate corruption, mysterious discoveries, and of course, a final action set-piece.

Yet, it all ends abruptly after five or six hours with nothing more than another static interaction to congratulate you for finishing the game. You’ll unlock a horde mode, which is okay but won’t provide many hours of content. With the Endeavour Pass already outlining four seasons of additional DLC, it’s likely some content was cut from the full package. 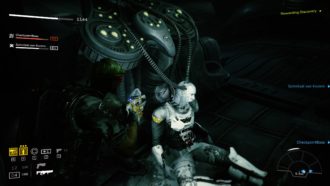 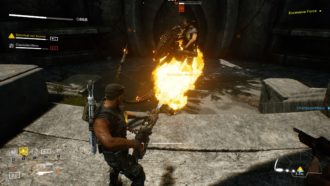 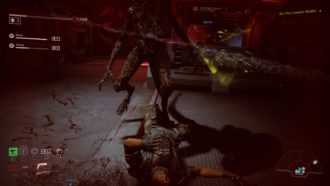 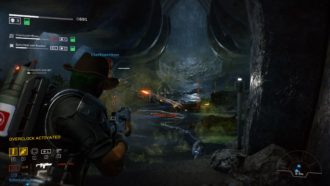 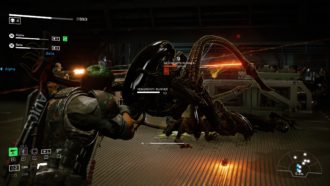 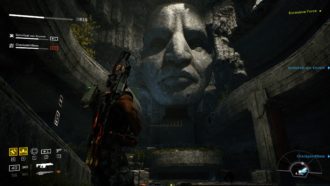 Gameplay itself is a mixed bag. On one hand, you have a fun shooting gallery of varied aliens and synths in fast-paced and often chaotic scenarios, with creative Challenge Card modifiers. Grouping up with two other friends and tearing through hordes of Runners with the classic M41A Pulse Rifle is a wonderful feeling. Moving to the next objective and watching your squadmate pounced by a Prowler, over and over again, is hilarious (when it’s not you). Those moments your team is on the verge of death, only for a Doc to drop a perfectly timed healing Trauma Station to survive the onslaught is the nail-biting thrill you get from Aliens: Fireteam Elite.

“‘…a day in the Marine Corps is like a day on the farm.’ It can be fun; but it can also be long, gruelling, and a lot of work.”

On the other hand, you have AI stuck on surfaces, bullet-sponge bosses, and boring objectives. Every level consists of hold-out points, where players activate a switch and need to endure waves of Xenomorphs to move on, with not much else. The AI improved since our preview, but annoying Spitters will still glitch behind walls and halt progress until they respawn or are found and killed. The frustrations will often outweigh the excitement, particularly with how focussed replayability is.

You’ll be unable to progress or play missions a friend hasn’t already reached themselves. Not only does this limit options, but it also hurts random matchmaking by forcing many players to return to the first act more than the other three. As result, replaying missions, especially on harder difficulties, is not desirable at all. Unfortunately, Sergeant Apone was right, “…a day in the Marine Corps is like a day on the farm.” It can be fun; but it can also be long, gruelling, and a lot of work.

Now all we need is a deck of cards

Back at the central hub, Marines will be able to customise load-outs before dropping into firefights. Players can tinker with five different classes: Gunner, Demolisher, Technician, and Doc are all available from the start. The fifth class, Recon, is unlocked upon completing the campaign. Each has a specific role within the squad with unique abilities. The Demolisher can launch a missile and wield a flamethrower that deals enormous damage. In contrast, the Gunner can deploy an Overdrive boost that enhances damage output to all allies. You have the choice to be the Fireteam backbone as a Doc or utilise devastating sentries as a Technician every match.

“You have the choice to be the Fireteam backbone as a Doc or utilise devastating sentries as a Technician every match.”

Abilities can be modified in the Perk Grid, allowing marines to swap out powers or add modifiers that boost other stats like revive speed, cooldown times, or weak spot damage. Initially, the Perk Grid is a bit awkward. It’s sort of like the restricted Resident Evil inventory management, where you must select a block that fits each perk and match them with specific abilities. Confusing at first, but it quickly becomes a justifiable tool to enhance classes for challenging missions.

Completing missions and finding hidden caches reaps the rewards. These rewards include consumable equipment like sentry guns or cryo-mines, creative challenge cards which add modifiers to each stage, or cosmetic items to personalise your soldier. A select handful of these can be purchased from Sergeant Park in the hub using currency earned in-game. Cosmetics include gun skins, decals, armour sets, outfits, hats, and more. The catalogue isn’t exhaustive, but everything here is earned by playing and that’s a welcome decision. 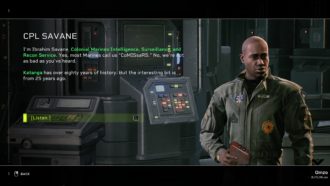 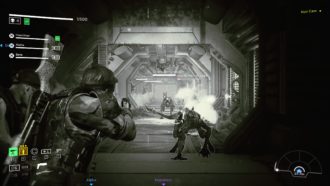 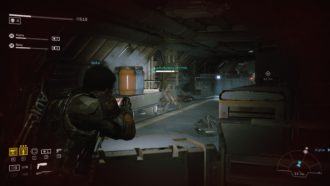 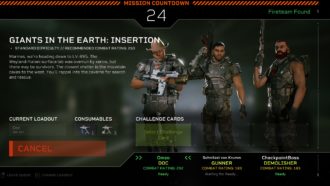 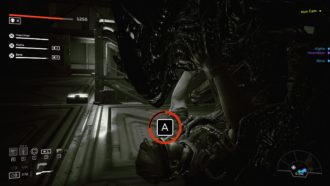 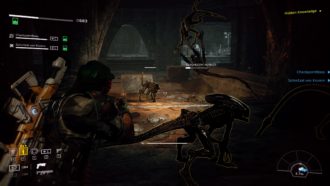 Although in space no one can hear you scream, the sound of the Aliens universe is iconic. Fireteam Elite attempts to replicate the atmosphere and does well for the most part. Xenomorphs crawling through vents, Warrior squeals as they announce their arrival, and the famous rattle of the Pulse Rifle is forefront. The score mimics the tracks from the films, with recognisable tones and beats. With that said, firefights during sections of the Giants In The Earth act doesn’t align with the whimsical music trying to reflect the bright and fresh planet surface. Composer Austin Wintory’s work is undoubtedly superb, it just gets used in some odd places at times.

Visually, Aliens: Fireteam Elite shows off all the best parts of sci-fi worlds. Dark and eery corridors of Priority One are backdropped by flashing red and green lights of warning alerts. The Gift Of Fire act presents ancient alien architecture’s organic and perverse designs against completely blackened materials. There’s plenty of ingenious environmental art to see. The character models themselves are good but not great. In the light or close up, the mediocre textures and shading become apparent. The Xenomporh outlines can often be distracting, too. Luckily, most of this game is dimly lit.

There are a handful of UI and functionality issues with the PC version of the game. Navigating menus is a little clunky, with the escape key exiting all and a right-click returning to the last menu. Sometimes weapon skins and attachments won’t confirm correctly or get mixed up with the secondary weapon in your loadout. There’s also confusion around being unable to start missions due to not interacting with the right NPC, all of which help to highlight that there’s still some ironing out to do. Notably, Cold Iron Studios began working on this game from home initially and went through several overhauls, originally being more a Destiny-like game. For what it is, they’ve done an okay job.

Aliens: Fireteam Elite is a valiant third-person shooter in the titular universe, yet still falls somewhat short. As a bite-sized, mindless action game on the surface, blasting away hordes upon hordes of xenomorphs with the M41A Pulse Rifle is excellent. Trying different classes, abilities, and unlockable weapons help keep gameplay refreshing during your first run. However, Fireteam Elite wants to be replayable and what’s on offer simply isn’t that fun to return to. Formulaic level design and often buggy AI make finishing missions a chore rather than a triumph. Series fans will enjoy the package, but Aliens: Fireteam Elite may struggle to survive against other co-op shooters. “Another glorious day in the Corps…” but not much longer than that.