Releasing 21 years after the original, Diablo 2: Resurrected remasters the nostalgic action role-playing game for players old and new. The dark fantasy and gothic Diablo universe is known for addicting gameplay and incredible atmosphere. Now in 4K (2160p) resolution with all-new animations, refined sound, and quality of life changes – Diablo 2 is rejuvenated. However, many aspects of the game simply don’t hold up against today’s standards.

The player pursues the mysterious Dark Wanderer, slaying monsters, collecting loot, becoming powerful, and eventually taking the fight against evil to the depths of hell itself. Set across five acts spanning the world of Sanctuary, adventurers travel through desolate wastelands and claustrophobic dungeons of demons to defeat the Prime Evils once again: Diablo, Mephisto, and Baal.

Diablo 2: Resurrected begins impressively with Blizzard’s signature animation quality. Almost like the developers actually read our preview in April, the package includes enhanced cinematics. Marius speaks with the rogue angel Tyrael in an opening scene with what looks like the budget of a blockbuster Hollywood movie. They are voiced terrifically, animated so smoothly, and the characters and environments within them look essentially perfect. This absurd quality continues throughout the rest of the game’s cutscenes. Reaching a new cinematic in this adventure is always a milestone and a highlight of the experience.

While the in-game world doesn’t look as filmic, the graphical upgrades meet expectations and maintain the gothic atmosphere of the source material. Tristram, the Barracks, Lut Gholein, and the fascinating worlds of the Lords of Destruction DLC are rendered in high-res beauty. Dynamic lighting and improved textures show off special effects like burning fires, lightning pulsing on the ground, and monsters being turned into giblets. All the original 2D sprite-based models are now reborn with full 3D physically based rendering and the UI also receives a fresh coat of paint.

With the press of a button, players can seamlessly switch back to the original look of Diablo 2. The smooth transition helps compare how visually striking the game is. The atmosphere and tone of the world remain precisely the same, maybe even better now the finer details are comprehensible. It almost makes it unbearable to return to the early 2000s look after treating ourselves to the revived graphics. 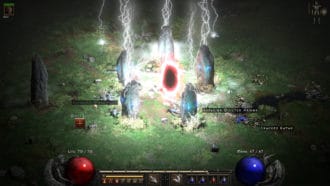 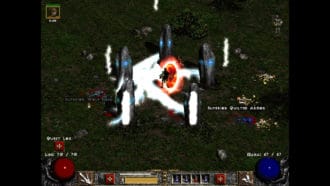 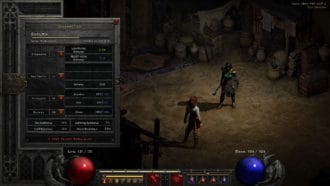 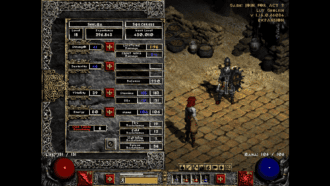 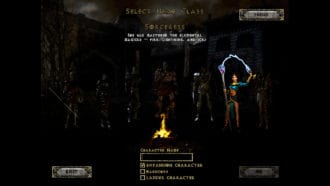 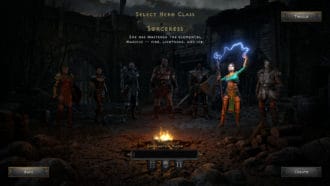 It takes time to master your skills…

Diablo 2: Resurrected controls are tricky to get used to. Left-clicking moves your character to a location and left or right-clicking on monsters will perform assigned abilities. With over 30 unique skills across each class, the controls are limiting. Binding hotkeys for quick swapping between skills is useful but still doesn’t help when fumbling for the right one in a tense fight. That’s without even acknowledging how inaccessible these controls are for people living with a disability.

You’ll often be chugging mana and health potions to stay alive, which is limited to eight at a time. Sometimes, if the game feels like it, it will automatically assign extra potions in your inventory to the hot bar. It’s the annoying micromanagement of yesteryear, representing the original game, but is no longer fun now.

“…introducing controller support for the first time in Diablo 2 advances functionality… It makes play so much easier having an arsenal of spells and abilities literally at your fingertips.”

On the other hand, introducing controller support for the first time in Diablo 2 advances functionality. While using a controller, you can easily assign 12 skills to the face buttons. It makes play so much easier having an arsenal of spells and abilities literally at your fingertips. The downside is managing inventories and navigating menus with an on-screen cursor is irritating. Selecting small items in your inventory is difficult and quickly selling or equipping loot is just not possible. Even with the redesigned user interface and expanded inventory, it’s still not great.

The game isn’t wholly barren of glitches, either. Getting stuck on small objects or having enemies hidden behind the environment or just invisible for whatever reason, happens often. Other times attacks will completely phase through monsters like a slight breeze. Item effects not working or appearing correctly, shared stashes disappearing, and connection issues are among the many common problems with the game. 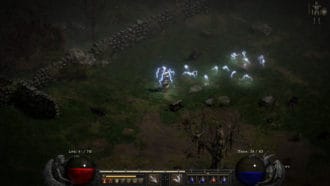 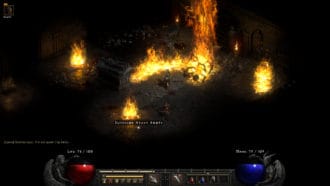 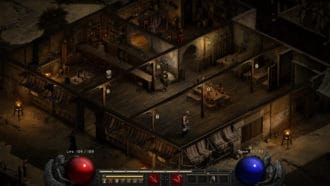 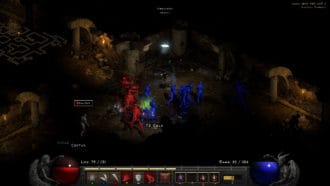 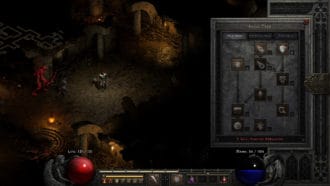 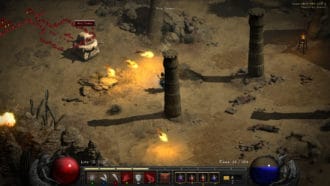 Purge this land of the shadow

One thing that Diablo always gets right is satisfying monster slaying. Each of the seven classes has several distinct playstyles. The Assassin is a terrific damage dealer with outstanding close-combat abilities and traps, whereas the Sorceress has high-damage spells and area of effect skills that require a strong mana pool. Rampaging against endless hordes of monsters once you discover the perfect build is a fantastic feeling. Veteran players will know exactly what armour or weapons they need to obtain to min-max their characters, and new players will enjoy learning along the way.

“In the early 2000s, it was fantastic. After Diablo 3 and many other remarkable innovations in the ARPG genre, it’s now not nearly as addictive.”

What new players aren’t going to love is the constant back and forth. Diablo 2 is a cycle of killing monsters, picking up loot, healing, returning to town to free up space or get more potions, back into the dungeon, rinse and repeat. Depending on the class and build, this cycle occurs every few minutes. It gets super frustrating during tough boss battles when you keep running low on resources and need to stop to return to town and buy more potions. Understandably, this is how Diablo 2 has always been – hack and slash and buy and pack. In the early 2000s, it was fantastic. After Diablo 3 and many other remarkable innovations in the ARPG genre, it’s now not nearly as addictive.

Multiplayer with up to eight others presents a new threshold of fun. Running around dungeons and absolutely decimating creatures is especially noteworthy. While enemies do become stronger with each player in your lobby, the challenge is always exciting. Unfortunately, you won’t be able to play with friends who are at later stages of the game. Characters who haven’t completed Acts or quests will not be able to travel to new destinations they haven’t already seen in their own playthrough. It’s simply bothersome level gating.

Farming for the most efficient weapons and runes for your build once you reach the end game will keep you occupied if that’s what you enjoy doing. Otherwise, adding revamped ladder seasons to show off high scores and worldwide rankings makes the game just that bit more competitive, too. Cross-progression is also a feature to be implemented later, which will please players with a copy on PC and console. 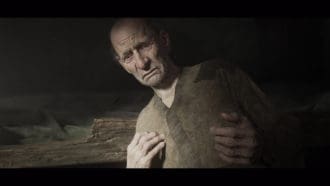 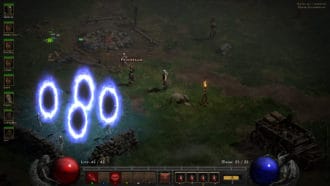 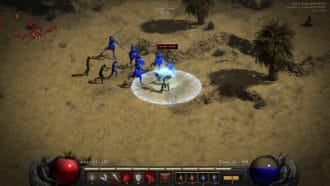 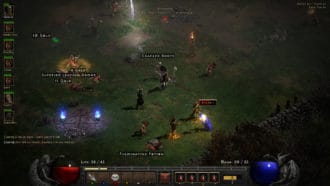 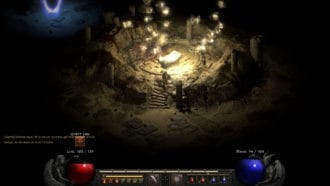 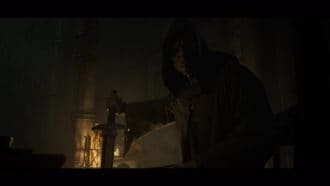 All who oppose me, beware

Controversy hasn’t escaped changes to specific character models in the upgrade. There have been minor adjustments to clothing and faces to present a more respectful and realistic design for the world of Diablo. Less underboob and cleavage to be specific. While most are happy, a vocal few are not.

The Amazon, for example, has been critically panned for being “less attractive” and “too masculine” compared to the original, pixelated counterpart. In response, Blizzard did modify the new model to make it younger and less angular in the face. Andariel is a giant monstrous demon with armour covering only their shoulders and waist, with now comically large breasts on display. If anything, the new graphics have sexualised Andariel more by emphasising the character’s model.

There are no, and never has been, male genitalia, objectification, or over-sexualisation throughout the entirety of Diablo 2. Why this inequality is still okay is beyond me. I guess a section of the community wants a “pure” experience, disregarding how social values changed in the last two decades, and Blizzard needs to sell games to their audience.

The initial intent to resurrect Diablo 2 with character models wearing appropriate armour for such a hellbound universe would have been a triumph for a company in hot water right now. While the changes made are welcomed, there is clearly so much more that could be done. Even referring to The Art of Diablo book, it’s clear the concept and key art progress into a more respectful representation over time, so it’s odd to see this regression preserved. Does it really matter if a character isn’t to your standard of “attractiveness”? If the demonic atmosphere of Diablo stays the same, then no, it doesn’t.

Diablo 2: Resurrected is, if anything, a faithful remaster of the original game. The visual overhaul and fantastic cinematics maintain the dark tone of Sanctuary’s horrifying demons and tales. Unfortunately, that alone doesn’t hold up after 20 years of innovation. Annoying gameplay mechanics, constant selling and buying, restrictive controls, regressive character art, and finicky UI poorly date this adventure. More quality of life changes should be here to truly bring the classic back to life. Diablo fans may love this remaster; others will likely not.