Jurassic World Evolution 2 is a park building simulation that brings all of the right elements from a well-established intellectual property. It’s the follow-up to the 2018 original, and hopes to act as an overall celebration of the franchise from its inception to now. It does this by offering two separate story modes in which you can either follow on from where Jurassic World: Fallen Kingdom left off in a new story, or look back and take part in ‘What If?’ scenarios within the previous films, such as a version of the original park that actually went WELL. No one dies on the toilet this time, for better or worse…

When you first boot up Jurassic World Evolution 2 you get smacked square in the face with the UNIVERSAL PICTURES intro, and honestly, I really liked this. It gets you in the right mindset for an epic experience and makes you think of the flashy spectacle of the Jurassic films, several moments of which are recreated in motion art cutscenes throughout the game. It’s done well, and having the classic theme tune play is just… chef’s kiss. Unfortunately, all of that positive momentum loses steam very quickly once you get into the actual game, and it’s a problem that permeates the entire experience.

The majority of my time with the game has been with the two story modes, having beaten the Fallen Kingdom continuation story in about 8 hours. The gameplay is mostly what you expect from a tycoon or builder style game; you’re given tasks to complete while essentially playing as a god that can summon fences and buildings in exchange for money that you accrue by attracting guests to view your captive dinosaurs. Money can only come in if there are visitors, so if a dinosaur is on the loose (which happens a lot early on), say goodbye to your income until you can get a lid on the problem.

To get the dinosaurs to actually co-operate within their pens and not try to seek freedom, you need to keep them comfortable and healthy, offering them an environment that caters to their needs. Sometimes that means offering a sandy plain full of rocks, or sometimes that means creating a lush forest with plenty of goats to chase. I came to loathe this mechanic due to an underlying problem with the game as a whole, being that the explanations of the mechanics can be rather bare-bones and you’re often left to your own devices without really being shown what everything does or how it benefits you.

Jurassic World Evolution 2’s issue with underexplaining parts of its core design was most prevalent for me with the staff and research mechanics. These mechanics lead me to trial and error my way through several menus in order to work out how to get the most basic work done without the game really explaining it to any effective measure. Then of course you have the aforementioned dinosaur comfort levels. These can be an exercise in tedium as you try to find the perfect balance between forest and fruit biomes while the dinos constantly swap between complaints. Eventually, you’ll end up doubling the size of the dino pen and creating more and more room until a single dinosaur the size of a horse has essentially got its own Amazon warehouse all to itself.

This is really the cardinal sin of Jurassic World Evolution 2. The game has somehow managed to make the prospect of a park full of dinosaurs, the creatures so many of us grew up loving in film and other media, somewhat boring.

The Jurassic Park licence as a whole has been woefully underutilised and I can’t help but feel frustrated at the missed potential. Without playing the game, think of what you’d expect to hear most of the time… the Jurassic Park theme, right? Unfortunately no. In fact, much of the time you’ll barely hear anything at all. What you do get is some very muted menu tune whenever you pause, and if you ever decide to head out in one of the game’s ground vehicles, you’ll hear some radio music that is so quiet it can’t be heard over the car’s engine. Adjusting the volume levels did not help either.

Jeff Goldblum is back as Ian Malcolm to tell everyone in the biggest words he can think of how bad of an idea everything is, and while he does a decent job with his performance, it does little to save an extremely underwhelming story. Essentially, a handful of characters from the films (excluding Chris Pratt, who I imagine is too busy stealing Charles Martinet’s job) guide you through a very by-the-numbers plot in which you help dinosaurs settle into new habitats after they’ve escaped into the mainland. The game begins to drop hints as you go that your allies are actually up to a more sinister plot, something akin to what we’d see in the films, but it really doesn’t go anywhere.

When it comes to how the game is presented, there’s a lot of room for improvement. The developers have gone for a nice grounded style to match the aesthetic of the films, and it looks fine. However, if you want to get things done with any sort of efficiency, you’ll have to zoom out to the point where you can’t really make out the dinosaurs anymore. On top of that, if said dinosaurs want certain biomes like trees for comfort, or god forbid they live in an aviary, you’ll have to either pixel hunt or zoom riiiight in if you want to check their stats or interact with them in any way.

“The game has somehow managed to make the prospect of a park full of dinosaurs, the creatures so many of us grew up loving in film and other media, somewhat boring.”

Jurassic Park Evolution 2 has a tendency to feel at odds with what made the source material so cool. You’re playing from such a distant perspective when the entire draw is SEEING the dinosaurs up close. Think back to each film; weren’t we all so in awe the first time we saw the raptors or the T-Rex moving so fluidly, looking so amazingly realistic that we could swear they’d almost brought them back for real? Compare that to here, where you spend 95% of your experience unable to see your raptors because they’re hiding amongst the trees you planted for them while you send your scientists to rest for the umpteenth time because they don’t know how to go for lunch by themselves.

It’s also somewhat amusing to realise you are actively doing everything you can to NOT LET JURASSIC PARK HAPPEN. You have to keep the dinosaurs happy, make sure the fences never break, respond to emergencies quickly… can you imagine if the first film had been like this? If we had seen everything just go smoothly and then everyone went home… we wouldn’t have a second film, let alone five. The entire draw of the franchise is the chaos that Ian Malcolm loves to bring up time and time again. We don’t love the Jurassic Park films for how accurate the dinosaurs are to real fossils or how nice the characters are, we love them because we know anyone at any time could be swooped up by a Pterodactyl, dropped 100 feet from the sky, and then gulped up without chewing by a colossal beast the size of a shopping centre! And it would look cool as hell to boot! 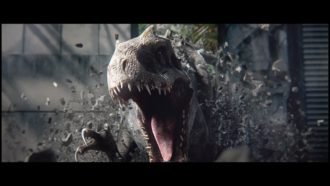 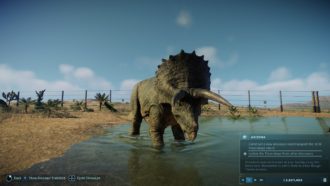 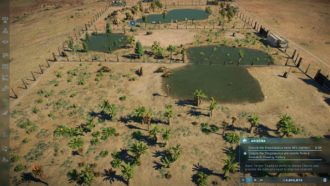 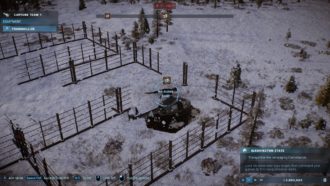 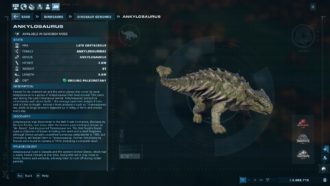 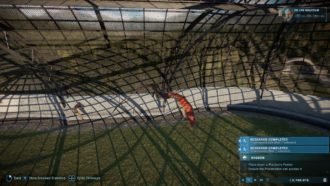 There are other problems I could get into with this game, such as the easy pitfall of running into inescapable debt in certain missions. But really, I feel that at this point I’m beating a dead hippodraco. Ultimately, I believe that Universal was so preoccupied with whether or not they could get this game made, that they didn’t stop to think if they should.

With those rather glaring issues out of the way, it is worth pointing out that the base game and it’s engine are honestly pretty solid. The locations within the game can look really pleasant both from a distance and up close, and the dinosaurs are well animated when you can see them in action. Everything ran very smoothly on top of that, with nary a performance hiccup even when jumping between god mode to driving on ground level and back again. The only real complaint in this department would be that certain objects in motion left motion trails, especially brighter entities like goats or helicopter rotors. There didn’t seem to be an option to disable motion blur in the settings so this may just be something you have to deal with until a patch arrives. Either that or the livestock have been playing too much Sonic.

Really, the foundation is there for a perfectly serviceable park management game that didn’t involve Jurassic Park. So many qualms with this title could be solved if it were about managing zoo animals, since keeping those contained would make so much more sense from a gameplay and thematic perspective; keeping tigers from running wild? Sensible. Keeping a TYRANNOSAURUS from running wild? Booooo.

Jurassic World Evolution 2, for all the negative things I’ve had to say about it, is not in itself that bad of a game. It IS however, a mediocre Jurassic Park game, one that has passable mechanics that gel with the franchise about as well as a raptor gels with Samuel L. Jackson. Ultimately, you can’t really look past such an enormous missing of the point and it does besmirch the experience. For diehard Jurassic Park fans like me, the Jurassic World Evolution formula is a hard sell, though park management enthusiasts may get a kick out of this still.